As the virus swept across the globe, it brought along fear, anxiety, political change, and economic uncertainty. It also prompted unprecedented interest in science journalism centred on epidemiology, infectious disease, public health, vaccine research and clinical trials, and statistics.

Researchers from many disciplines lent their expertise to help stop the spread of the virus. Even physicists played a role, from helping to devise more efficient testing methods to developing software that helps track viral mutations.

Earth continues to heat up

The pandemic did have one unexpected bright point: air pollution dropped noticeably in early 2020 while nations were locked down to prevent the spread of the virus. But the short-term impact doesn’t make up for long-term damage: the World Meteorological Organization reported that carbon dioxide levels continue to show record highs, and 2020 is on track to be the warmest year on record. Over the summer, the Milne Ice Shelf – Canada’s last intact ice shelf – collapsed. And in September, scientists released a study saying that the Arctic region is transitioning into an entirely new climate regime.

The Earth may be indisputably warming – but did you know the universe is also warming? (Well, parts of it, in any case.) A study from researchers at Ohio State University showed that the average temperature of gas in the large-scale structure of the universe has increased more than 10 times over the last 10 billion years.

Researchers also filled in significant gaps in our understanding of how the universe has expanded over time. This summer, the Sloan Digital Sky Survey released the largest 3D map of the universe ever created, with measurements of more than two million galaxies and quasars spanning 11 billion years of cosmic time.

It was a big year for black holes. In June, the LIGO-Virgo collaboration announced the discovery of a stellar remnant that was too heavy to be a neutron star, but not heavy enough to be a black hole, via gravitational waves. “We don’t know if this object is the heaviest known neutron star or the lightest known black hole, but either way it breaks a record,” said Vicky Kalogera of Northwestern University.

Just months later, the LIGO-Virgo team announced another first: the detection of an “intermediate-mass” black hole. Weighing in at 142 solar masses, the black hole was the product of a merger between two black holes with masses 66 and 85 times the mass of the sun.

In a year with so many black hole firsts, it only seems fitting that this year’s Nobel Prize in Physics was awarded to three researchers for their discoveries relating to black holes. Reinhard Genzel and Andrea Ghez were honoured for their discovery of a supermassive black hole at the centre of our galaxy. Roger Penrose won for his Singularity Theorem for Einstein’s Theory of General Relativity, which demonstrated that black holes were a common and almost inevitable feature of the physical universe.

A burst of understanding

What causes fast radio bursts (FRBs)? Since their discovery in 2007, astronomers have puzzled over the origin of these bright, ultra-brief radio signals. This year, they may have cracked it.

Most FRBs are one-off events, but in June, the Canadian Hydrogen Intensity Mapping Experiment (CHIME) FRB Collaboration announced in Nature the detection of an FRB that repeats on a regular, periodic basis. And in November, they reported the first discovery of an FRB within our own galaxy. What’s more, it seemed to originate from a magnetar – a type of neutron star with an extremely powerful magnetic field.

(One thing we know FRBs definitely are not? Microwave ovens.)

A little closer to home

Is there life on Mars Venus? Long considered inhospitable to living things, that assumption was questioned this year when scientists reported finding signs of phosphine gas – a potential marker of microbial life – in the atmosphere of Venus this September. But subsequent analysis and observations suggest that phosphine levels are only one-seventh that of the initial estimate.

We may not know if there’s life on Venus, but we now know there is definitely water on the moon.

“Without a thick atmosphere, water on the sunlit lunar surface should just be lost to space,” said Casey Honniball, a postdoctoral fellow at NASA’s Goddard Space Flight Center. And yet, in October, NASA confirmed the detection of a surprising concentration of water in the sunny Clavius Crater on the moon.

Don’t pack your swimsuit if Space X starts selling trips there, though: the Sahara desert has 100 times the amount of water than what was detected in the lunar soil.

Nature gets a glow up

Already one of nature’s most bizarre mammals, the platypus got even weirder this year. It’s hard to believe that’s possible – not only do they lay eggs, have webbed feet and a duck-like bill, use electricity to hunt, and, uh, produce venom – in October, researchers discovered that platypuses also glow under UV light. 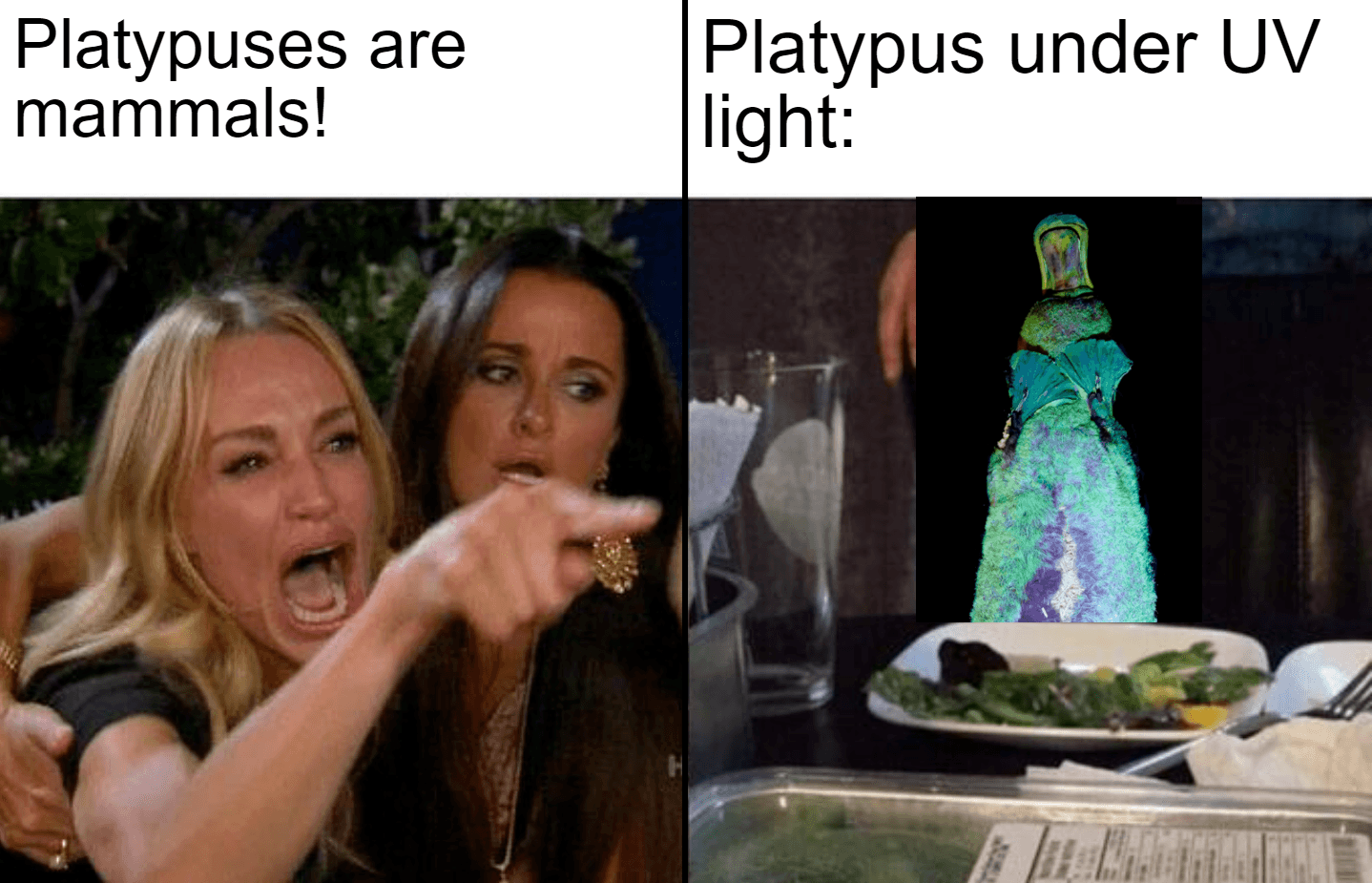 Looking for ways to save on your electricity bill (who isn’t)? Well, science has you covered. Kind of. This spring, a collaboration of researchers extracted DNA from bioluminescent mushrooms and inserted it into tobacco plants. The result? A consistent, bright, vibrant glow, from the roots all the way to the flowers. Maybe one day, we’ll replace our LED mood lighting with radiant succulents.

One small step for a fish was one giant leap for evolution. A team of scientists has identified at least 11 species of fish suspected to have land-walking abilities. The fish all belong to the hillstream loach family, which includes the only living fish species to be caught in the act of walking: the cave angel fish.

In addition to swimming and walking, there’s one more way fish can get around: flying. Though it’s not as glamourous as you might expect. Researchers from Hungary and Spain demonstrated fish eggs can survive a trip in a bird’s digestive tract and hatch after being, ahem, deposited in their new environs.

And in April, marine scientists shared the discovery of one of the longest organisms ever seen: a 150-foot-long swirling coil known as a siphonophore. The creature was one of nearly 30 new underwater species discovered during the month-long expedition off Australia’s western coast.

In a nice touch, researchers at Cornell University have created a stretchable “skin” that detects deformations such as pressure, bending, and strain. The sensor could allow robots the same sense of touch that humans enjoy, and may be used in augmented reality technology, physical therapy, and sports medicine.

If E.T. calls, he’s going to have to leave a voice mail. In March, the [email protected] distributed-computing project went on hiatus after 21 years of harnessing the power of individual personal computers to search for signs of extraterrestrial life.

Meanwhile, [email protected] seems to have picked up some of the slack. Sudden interest spurred by the pandemic saw the project break the exaFLOP barrier, reaching more than one quintillion floating-point operations per second. [email protected], which runs huge simulations to help combat diseases and viruses, has already yielded more than 233 research papers.

Imagine not only needing to think several moves ahead in a game of chess, but also keeping track of boards in entirely different universes. Quantum chess requires just that. It’s a version of the classic game that incorporates quantum concepts of superposition, entanglement, and interference. The world’s first quantum chess tournament was held this December as part of the virtual Q2B Practical Quantum Computing conference. Perimeter physicist Aleksander Kubica was named champion – at least in this universe.

Games, as it turns out, aren’t all just about having fun. According to a study published in Frontiers in Psychology, competitive esports players share the same mental stamina and toughness as high-performing Olympic athletes. Next time your parents roll their eyes at your video games, just tell them you’re in training.

End of an era

On December 1, the Arecibo radio telescope in Puerto Rico was shattered beyond repair when a scientific instrument platform crashed down into the dish below. Arecibo’s 305-metre iconic dish (which you may recognize from appearances in Contact, GoldenEye, and Species, to name a few) was built into a natural sinkhole. Construction was completed in 1963, and for the next 53 years, it held the record for the world’s largest single-aperture telescope.

The loss of the telescope was felt keenly by astronomers around the world, as well as by generations of Puerto Ricans.

In memoriam, Science News reflects on 10 of Arecibo’s coolest scientific achievements, including clocking pulsars, finding evidence of ice on Mercury, and broadcasting Earth’s first message intended for an alien audience.

Perimeter Institute science has carried on this year as well. You can read about it over here. Happy 2021!