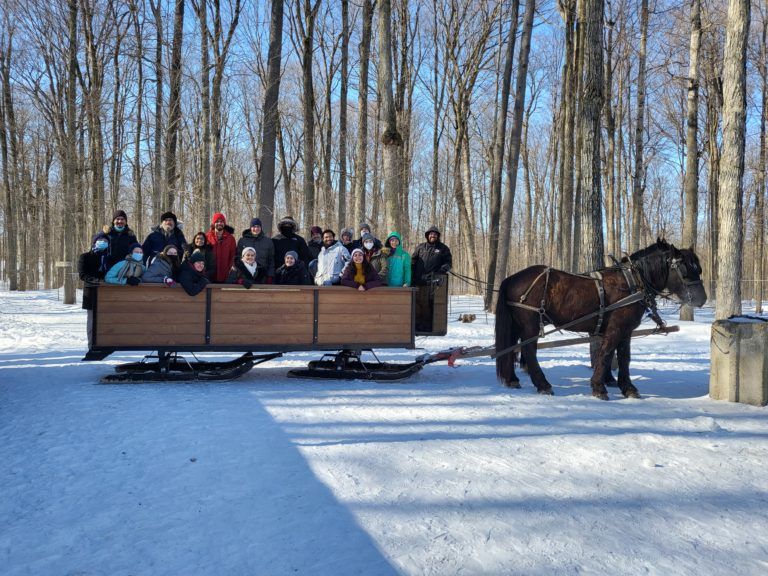 In February 2021, Manu Srivastava was enjoying the mild temperatures at home in the central province of Madhya Pradesh, India.

A year later, he was wrapped in a blanket, riding on a horse-drawn carriage through the snow-lined streets of St. Jacobs, Ontario, in temperatures of around –12°C.

For Srivastava, being accepted into the Perimeter Scholars International (PSI) master’s program in Waterloo came with new experiences, new ideas, and a dramatic shift in the weather.

The master’s program is an intense, year-long dive into physics and math. But in the midst of it is a one-week slate of Winter School activities. The event, which took place in early February, combines interesting physics problems with some fun (if frigid) Canadian winter activities and sports.

Many students like Srivastava are experiencing Canadian winter for the first time.

“It’s magical,” he says, then laughs, “well, for about the first month.” As temperatures can often dip below –20°C, he has quickly discovered why most Canadians have grown weary of winter weather by February.

But the carriage ride was fun, he adds: “We had a wonderful day. We did a lot of productive research in the morning and the evening, but in the middle, it was extremely helpful to relax.” 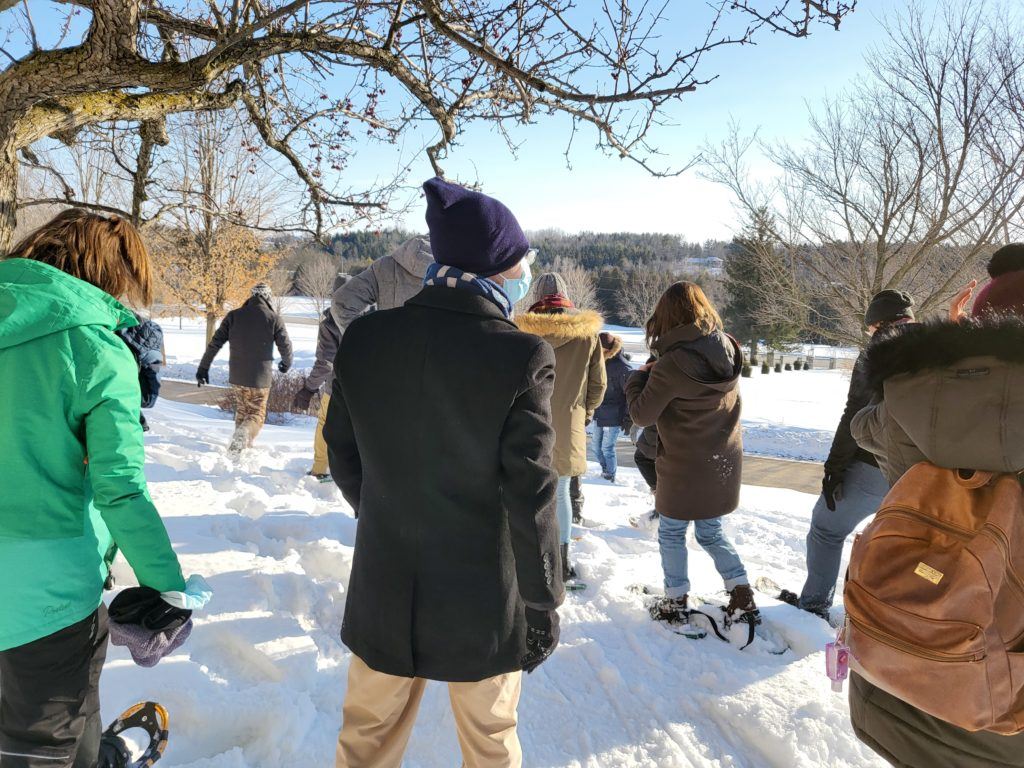 The Winter School is designed to give PSI students a chance to spend a week immersed in a topic in physics they might not normally dip into. Srivastava is generally interested in quantum gravity, but for the Winter School week he branched off into the causal inference group. There, he delved into the fascinating subject of cause and effect, which has deep implications in the counterintuitive realm of quantum mechanics.

“I wanted to do something I had not done before. I think insights from different fields can prove to be very helpful in what people may think are unrelated fields,” Srivastava says.

Last year, PSI was forced into virtual mode because of the pandemic, says Dan Wohns, assistant director of academic programs at Perimeter. But this year, it’s making a triumphant in-person comeback, with 21 students from 15 countries taking part.

“It’s the first time since the pandemic that we have been able to come together,” says Wohns. “The Winter School is a rare opportunity to dive into a different research project in a short period of time. It’s also a good way for faculty to interact with the students and get an idea of whether they’re a good match for a potential PhD in that area.”

Perimeter Faculty member Robert Spekkens says it was wonderful to introduce a fresh crop of students to the topic of causal inference, a subject with exciting new developments emerging. 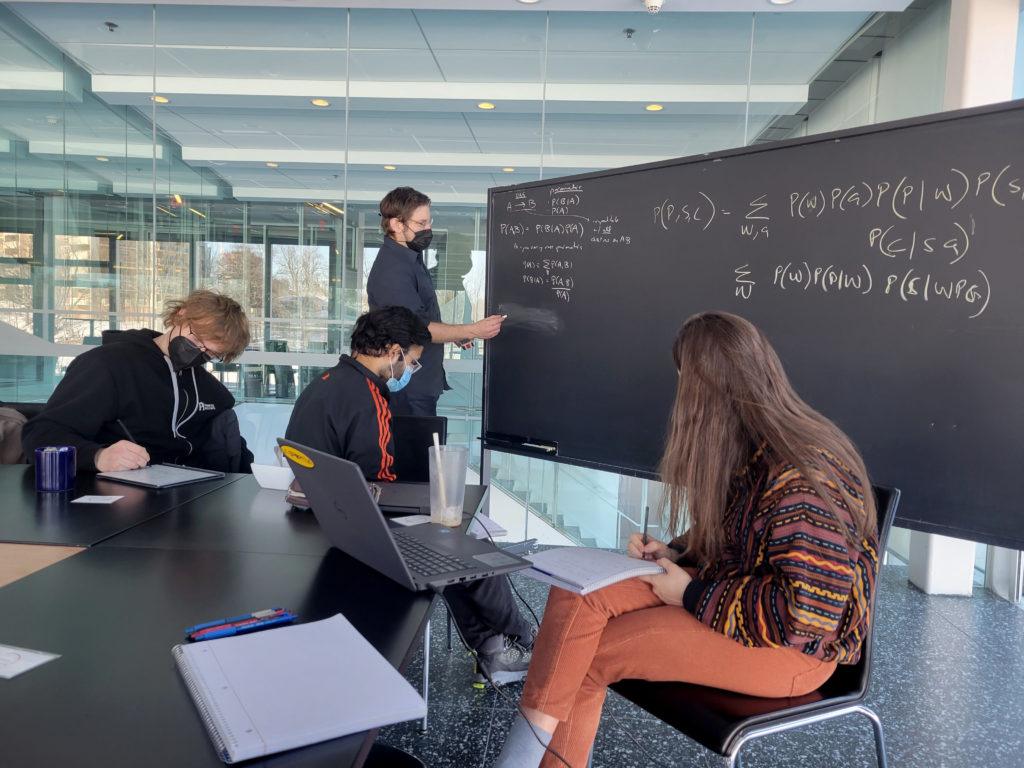 Causal inference is all about how to infer causal relationships from statistical data, he explains. That can sometimes be obvious, such as seeing the correlation between ice cream sales and sunburns and inferring that it is due to the common cause of sunny days. But often, with more complex sets of variables, such as those associated with important problems in epidemiology or economics, it’s not so obvious, he adds.

In physics, the tools of causal inference have found applications in Spekkens’ field of quantum foundations. A famous result by John Stewart Bell from the 1960s known as Bell’s theorem presents a challenge to the notion that correlations in quantum experiments can be explained in terms of classical ideas of cause and effect. It suggests that we require new, intrinsically quantum, notions of cause and effect.

Researchers at Perimeter are developing new causal inference techniques to help make sense of this. “We can use the state-of-the-art techniques people have developed for inferring causal relations from statistical data and apply them to what we know about Bell’s theorem,” Spekkens says.

“What I really like about PSI is that you get exposed to all these areas, but you get exposed to them in a very different way than other master’s programs,” says Sofia Gonzales, a PSI student from Spain who was part of the causal inference group. “You get to work directly with the leading researchers in the field.”

Matthew Fox, from Boulder, Colorado, who was also in the causal inference group at the Winter School, says he finds quantum foundations fascinating. “I think it’s amazing that we’ve had quantum mechanics for over a century now, and we still don’t understand what it’s saying,” he says.

Virtually the entire physics research world is struggling to figure out how to make Einstein’s theory of gravity fit with our present day understanding of the quantum world. They don’t mesh together, and the conventional view is that Einstein’s gravity theory will need to be modified. But Penrose has suggested the unconventional approach of using the geometry in Einstein’s theory of relativity to modify quantum theory. Or that, perhaps, both theories need to bend.

“It’s certainly a minority approach, but I have always wanted to set aside a bit of time to think this through and to see if anything interesting can be added to it,” Boyle says. “It occurred to me that this Winter School, where a week is set aside to think through a problem, would be a great time to do that.”

The master’s students are a great group to try this with, Boyle adds.

“They’re full of energy,” Boyle says of the students. “They are completely undaunted by the fact that there is this huge topic in physics that we’re hoping to resolve in a week or that it’s an unconventional approach to a problem. They just have a very fresh view of everything.”

One of the master’s students, Sotirios Mygdalas from Greece, is interested in pursuing a PhD in gravitational physics, so the topic proved fascinating to him.

“We wanted to see, using the principles of Einstein’s theory, what will change in the other theory,” Mygdalas explains. “Will it be the same? Will it end up being an approximation of two fundamental ways of thinking about things? This is what we’re trying to understand.”

Mygdalas considered pursuing his master’s in physics at a prestigious European university, but he says he came to Perimeter because it provided significant benefits in addition to academics: teammates and future colleagues.

In other programs, one might be in more competition with other students. At Perimeter, he says, the philosophy is different: it’s all about working together.

Mygdalas gives an example. At Christmas, when he wasn’t able to travel back to Greece to be with his family, the students in his dormitory organized their own Christmas with diverse foods from all over the world. “It was amazing. Even though I couldn’t get back to Greece to see my family, I felt like I had one here.”