The class of 26 Perimeter Scholars International graduates gathered in their homes around the world for their online convocation, which featured surprise addresses from three Nobel laureates in physics. 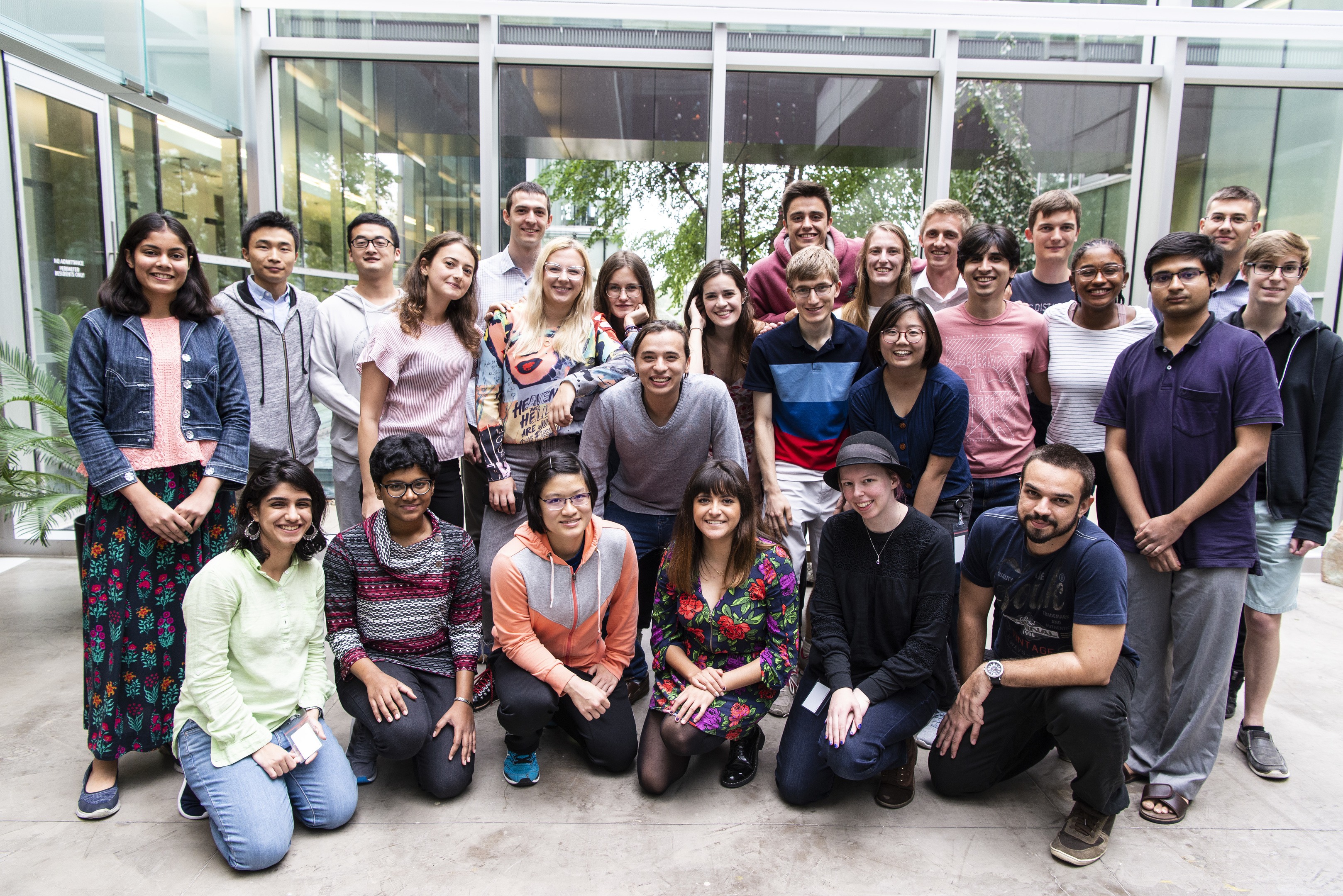 Like many other graduates around the world, the close-knit 2019/20 class of Perimeter Scholars International (PSI) had to convocate via Zoom.

The 26 students – 13 women and 13 men, from 17 different countries – received their masters’ degrees in a unique ceremony which featured video addresses from three Nobel laureates.

“They say the great breakthroughs in science often come from collision – from combining problems from one field with problems from another,” Perimeter Director Robert Myers told the class in his address.

“In the best of years, PSI is a very challenging program. But this year, smack in the middle of all that, you were handed an enormous extra challenge, a worldwide pandemic, with all of the demands and strains which that imposed. But each and every one of you has come through with flying colours.”

The PSIons’ (as they call themselves) achievements in this difficult time have drawn admiration from the Perimeter community and beyond.

The Honourable Navdeep Bains, Canada’s Minister of  Innovation, Science and Industry, sent a video greeting to the graduates, in which he encouraged them to look ahead not only to careers in physics, but in all the other fields that require the kinds of mathematical, computational, and problem-solving skills that PSI provides: quantum computing, machine learning, data science, precision medicine, advanced manufacturing, and more.

The Ontario Minister of Colleges and Universities, Ross Romano, sent written congratulations, where he added: “We say a special thank you to all of your administration, staff, and the fellows who have been working tirelessly to ensure your courses could be completed online.”

The academic year was one of challenging transitions. PSI teaching fellows Dan Wohns and Gang Xu were in Ghana when lockdowns started happening in countries around the world. “We came back to a completely different place than we left,” Wohns said.

PSI fellows, lecturers, and academic administrators worked quickly to adjust the program, course content, and living situations for students so that the semester could still be delivered safely and effectively. Nine of the 26 students returned to their homes in Belgium, China, France, Germany, Pakistan, and India early in the spring, and needed to be accommodated in different time zones. Those who stayed, and had previously shared apartments, were moved so that each student was living alone.

“We decided all of that in the first week, on video chats,” Wohns said. “They were used to spending a lot of time together, academically and personally. And that all changed immediately. For some people it was harder to focus and concentrate, which I think is general to everyone in the pandemic.”

PSI student Elizabeth Bennewitz left Waterloo in mid-March, moving in with her twin sister in Baltimore and continuing her studies from there. She had never taken an online course before.

“Finishing the semester online was extremely difficult, but I also learned a lot about effective work strategies as well as effective communication strategies to not only stay connected to my friends, but also to collaborate on my research project,” she said. “I believe I am a more flexible and adaptive student and worker because of the experiences I have had this year during PSI.”

Bennewitz worked with 1QBit at the Perimeter Institute Quantum Intelligence Lab (PIQuIL) on her final research project and is continuing that research in the coming year. “I am excited to learn about the quantum computing industry and continue learning and doing computational physics research with the 1QBit team,” she said.

Dalila Pîrvu stayed in Waterloo until the end of the program, but found the early days of the pandemic to be difficult. Previously, she liked studying in libraries and keeping her home work-free; that work-life balance went out the window, leading to stress, fatigue, and feeling unproductive for the first few weeks.

Online meetings with her supervisor and virtual tutorials were completely new. “I got used to it, thanks to the amazing effort of the PSI fellows and of my supervisor, who was extremely supportive of me even beyond the work related to the PSI essay.”

Pîrvu said not spending time with her fellow students was the hardest part, but once it was safe to do so, she arranged to go for runs with one colleague and grocery shop with another. “Some restrictions relaxed around the time of our essay defense, and so then we got together to celebrate.”

Now at her family’s home in Romania for the summer, she planned to celebrate with friends via a virtual Zoom party after the official graduation ceremony. Pîrvu, whose final PSI research essay was on the dynamics of vacuum decay, will be returning to Perimeter as a PhD student. She’ll be working with Associate Faculty member Matthew Johnson on research in cosmology.

Many of the 26 students also recorded video messages about their experiences at PSI.

PSI valedictorian Benjamin De Bruyne led the students on one final tutorial: from his home in Belgium, he asked them to consider a theory that saw 26 particles gather from around the world in Canada. “What’s going to happen to them in one year?” he asked. “What have you learned from this theory? For me, the answer is not straightforward. Let’s be honest, this year was not all sunshine and rainbows. We went through difficult times … Every day felt like a roller coaster, but it was an amazing experience at the same time.”

The physics Nobelists who surprised the class with their addresses offered advice for the PSI students as they strike out toward their myriad futures.

Steven Weinberg, who received the 1979 Nobel for landmark work unifying the electromagnetic and weak forces, spoke of the progress science makes by rejecting certainty and asking questions.

Art McDonald, a former Perimeter Board member who received the 2015 Nobel for proving that neutrinos have mass, spoke of the need to stay curious and keep learning.