For instance, we might be living inside a hologram.

The idea that the reality we perceive is projected inward, like a hologram, from a surface that encloses the universe like wrapping paper, is truly a Heisenbergian mind-stretcher. Nevertheless, there are a few deep hints that it might be true. Even if it isn’t true, pretending that it is has provided us with a powerful suite of tools for cracking tough problems and exploring big ideas.

The whole of this work goes by the name “holography.”

“Holography has proven very powerful over the last 20 years or so,” says Raclariu. “Celestial holography wants to build on that – to generalize holography and make it even more powerful. Ultimately, we want to be able to say something about the gravitational dynamics of our universe.”

All holography is an exploration of the holographic principle: that any description of spacetime – or, interchangeably, any theory of gravity – is exactly equivalent to a field theory that describes the wrapping paper surface that encloses that space. The field theory in X dimensions becomes gravity in X+1 dimensions, the way information etched on a 2D holographic film becomes a 3D holographic image.

There’s at least one place in nature where this seems to happen: black holes. If you had the misfortune of tumbling into a black hole and you magically lived, you would experience the fall down the hole’s bottomless gravitational pit in full 3D glory. But things would look different from the outside, where all the information about you and your tumble would be encoded in a field theory on the event horizon: the black hole’s 2D wrapping paper surface. A physicist could describe your grisly fate in either the 3D gravitational language or the 2D field theory language. 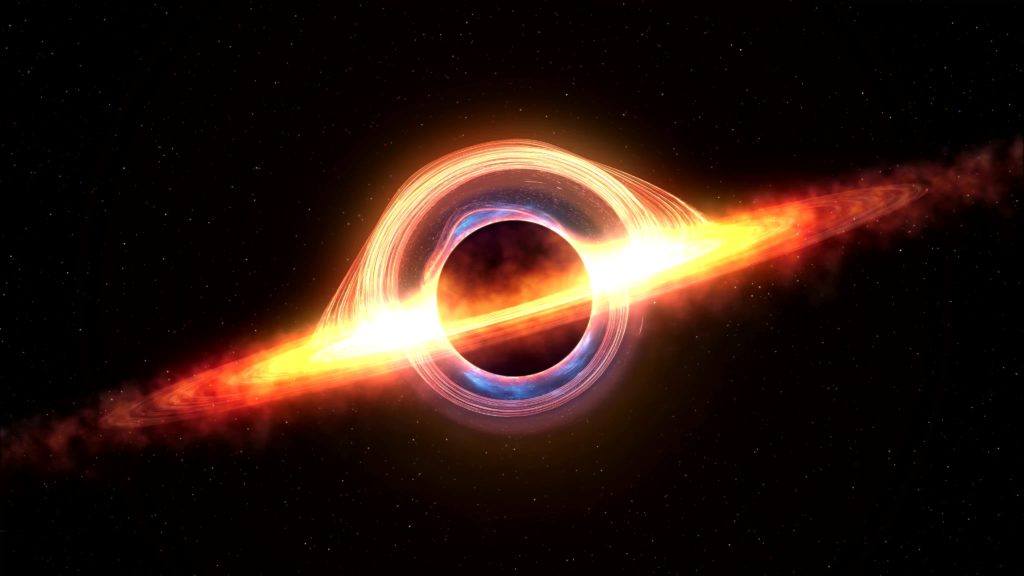 This equivalence between one physical approach and another is what’s known as a duality. In the case of holography, the duality is between a field theory of particles and a theory of gravity that describes a spacetime.

With black holes in their pockets, physicists struck out through the holographic thickets on a hunt for another spacetime/field theory duality – another incarnation of the holographic principle. They found one.

AdS/CFT is by far the most successful and well-explored realization of the holographic principle. It was a major advance for string theory’s treatment of quantum gravity, and it provides new pathways for approaching sticky problems in field theory by translating them into more tractable problems in gravity. AdS/CFT is so useful that it seems to pop up everywhere. To pick just one example, you’ll sometimes find black holes in condensed matter problems.

If the holographic principle says that you generally can translate a problem from gravity to field theory and back, then AdS/CFT is the first good holographic dictionary.

But it shouldn’t be the only one. And – since we do not in fact live in an anti-de Sitter space – it might be nice to have a dictionary where the gravitational language is closer to the one our universe speaks.

“AdS/CFT has produced a lot of progress in a lot of areas,” says Raclariu. “It has given us some insight into gravity. But of course, this is a toy model.”

A toy model is something for scientists to play with to get the feel of things. Toy models aren’t meant to be realistic, and indeed this one isn’t, Raclariu says: “We know that the real universe is not a negatively curved spacetime.”

The universe is expanding, which means it’s positively curved – but not very much. “On astrophysical timescales, the universe appears flat,” she explains.

Raclariu and other celestial holography researchers want to work with a spacetime that’s asymptotically flat – that is, flat if looked at from far away. Local masses will cause local bumps and dips, and gravitational waves will wrinkle through the sheet, but the big picture is a flat picture. “It’s a much better match for our universe than negatively curved anti-de Sitter space,” says Raclariu.

The holographic principle suggests that the gravitational theory of this spacetime should be dual to a field theory that lives on the outer surface only – the skin of the balloon, as it were.

“In astronomy, there is this notion of a celestial sphere, which is essentially what you see if you look at the night sky,” says Raclariu, invoking the old image of the Earth surrounded by a dome of fixed stars.

“In this case, the proposal is that the dual theory is going to live on this celestial sphere, on this two-dimensional surface,” she adds. “That’s why it’s called celestial holography.”

Celestial holography is a hugely ambitious program. It’s likely to take years or even decades to build a full dictionary to translate between the gravitational theory – the description of the spacetime – and its dual field theory on the celestial sphere.

Recently, Raclariu collaborated with Monica Pate (a postdoc from Harvard University) and two giants in the field – Nima Arkani-Hamed of the Institute for Advanced Study and Andrew Strominger of Harvard – to create a phrasebook of the first few essential words. Their work was published in the Journal of High Energy Physics.

A field theory can be understood as a theory of particles. One of the most basic things to know about particles is how they interact with one another – or “scatter,” in the parlance of the field.

“In this paper, we tried to understand one of the simplest scattering processes and how they are described on the celestial sphere,” says Raclariu. “We focused on massless particles – for example, in gravity, we looked at graviton scattering.” These massless scatter processes, she says, were simple enough to be understood but challenging enough to help researchers start developing tools and intuitions.

There are so many gravitational mysteries that could be tackled. Physicists could perhaps describe black holes, or the big bang, or other places where gravity works at energies so high that quantum effects can’t be ignored. They could resolve the black hole information paradox – that place where information theory, quantum theory, and gravitational theory collide. They could even crack the puzzle of quantum gravity entirely.

“Of course, we are very far away from this currently,” says Raclariu. “It’s the big thing that drives us. In the meantime, we make these small steps toward it.”

These small steps climb toward a larger promise. Having a working phrasebook hints that a dictionary is possible. Taking a step opens the view on a new path.

And though it’s impossible for most of us to imagine that the universe around us is a hologram cast inward from the celestial sphere, for celestial holography researchers, that imagined picture grows sharper day by day.