I didn’t attend my last classes as a master’s student at Perimeter Scholars International (PSI). I wanted to attend – after all, my classmates and I had worked our rears off in the intensive program from August 2012 to June 2013. I imagined a sense of achievement and exuberance bubbling up as the final lecture concluded. But a 24-hour virus made my stomach bubble up instead.

Too exhausted to move, I wallowed in my apartment. My roommate Chiamaka checked in on me, asking what food I could tolerate. After attending the final lecture, she returned with a mild dinner from Perimeter’s Black Hole Bistro, in a gesture of kindness that remains vivid in my memory.

Chiamaka Okoli grew up in Nigeria. After completing her undergraduate degree there, she participated in the Postgraduate Diploma Programme at the International Centre for Theoretical Physics in Trieste, Italy. Then came PSI, and later a PhD, in Waterloo, Canada.

While walking, over dinner, or while lounging in our living room, Chiamaka would tell me stories about her siblings, friends, and church. Conversations with her were often punctuated by her rich laugh, a melodious sound that would ring out across the crowded bistro.

Cosmology fascinated Chiamaka, and she continued studying it after we graduated from PSI. She earned her PhD at the University of Waterloo, focusing on dark matter, despite a sudden illness that struck during her studies. The illness took her life just months after she completed her PhD in 2019. She left behind a husband, a young son, and many memories.

Friends of Chiamaka’s have honoured her in different ways. One of my tributes is tucked inside my new book, Quantum Steampunk: The Physics of Yesterday’s Tomorrow. That tribute is quiet and indirect, like an echo of a greeting called out in a hallway; I didn’t have space to explain who Chiamaka was or what she meant to me. So this article is to expand on the tribute woven into the book.

Whereas Chiamaka found her calling in cosmology, I took a different direction. I dove into the intersection of quantum information theory and thermodynamics.

The two fields fascinated me when I first undertook research on them during PSI, and I’ve immersed myself in them ever since. After graduating from Perimeter, I joined Caltech for a PhD, then Harvard as a postdoc. Now, I lead a quantum thermodynamics research group at the Joint Center for Quantum Information and Computer Science at the National Institute of Standards and Technology and the University of Maryland. 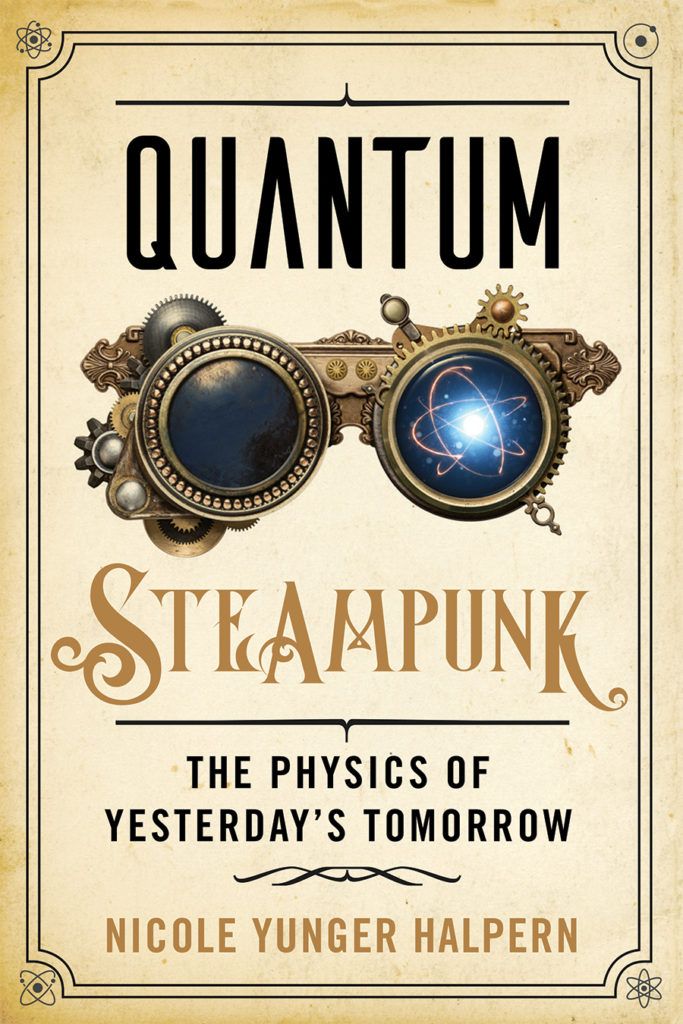 Thermodynamics – the study of energy – emerged during the 1800s. Heat engines were turning factory wheels for the first time, and thinkers wanted to learn how efficiently machines could operate. Traditional thermodynamics describes machines built during the Industrial Revolution: large, massive, classical systems.

Fast-forward a century and a half. Many of today’s technologies – lasers able to manipulate single atoms; quantum computers formed from superconductors – challenge the framework of traditional thermodynamics. But thermodynamic concepts (such as heat, work, and efficiency) remain relevant.

For instance, to coax quantum behaviours from superconductors, we have to cool the devices to low temperatures. Cooling, or expelling heat, is a thermodynamic process. Yet how to define or measure the heat emitted by a quantum system – whose energy changes when we measure it – is unclear.

Quantum information theorists study how we can leverage quantum phenomena, such as entanglement, to process information in ways that classical systems can’t. Quantum thermodynamicists dream up quantum engines, ask how we can use entanglement as a resource for performing work, and extend the laws of thermodynamics to small and quantum systems.

During graduate school, I was struck by how quantum thermodynamics shares its spirit with steampunk. This literary, artistic, and cinematographic genre juxtaposes Victorian settings – factories, grimy cities, cravats, and petticoats – with futuristic technologies such as time machines, clockwork octopuses, and dirigibles. Blending past and future, steampunk creates an aura of nostalgia and adventure. Fans of the genre write stories, craft costumes and jewellery, dress up in goggles and top hats, and gather at conventions.

Quantum thermodynamics, meanwhile, combines Victorian thermodynamics with cutting-edge quantum information science. It brings steampunk to life. During my PhD, I began calling my field – its aesthetic, its spirit – quantum steampunk.

My new book, Quantum Steampunk: The Physics of Yesterday’s Tomorrow (published today by Johns Hopkins University Press), is a mostly nonfiction account of the field: background information, a survey of key results, and a vision for the future. But, tapping into the fantastical element of steampunk, each chapter begins with a fictional flourish, a snippet from a quantum steampunk novel that lives in my imagination.

But one character has no doppelgänger that I know of in any quantum information thought experiment: Captain Okoli. That’s because Captain Okoli is my tribute to Chiamaka.

Captain Okoli helps Audrey, Baxter, and Caspian on a globe-spanning quest. He ferries them on his ship to Fluctuarian Bay (named for fluctuation relations, generalizations of the second law of thermodynamics), then advises the adventurers about reaching the village of Singledon (named to evoke one-shot thermodynamics, which describes single experimental trials).

One can reach Singledon only by a vehicle called a pickering-bus. It has long, spindly legs, like a praying mantis, and leaps from leg to leg across the landscape. The juddering, wobbly ride resembles the stochastic nature of processes that involve heat. Captain Okoli invented the pickering-bus with his sister.

Captain Okoli’s inventiveness reflects the creativity that Chiamaka applied in her cosmology research. His guiding of a ship into strange waters and his familiarity with remote lands reflect the life of discovery that she led as a scientist. And Captain Okoli’s generosity toward Audrey, Baxter, and Caspian echoes the kindness that Chiamaka showed me as a roommate.

All of us who knew Chiamaka wish that she were here to continue inventing, to continue discovering. I hope that her spirit lives on in the book – in the kind and vivacious captain and innovator – as her laughter lives on in our memories.

Nicole Yunger Halpern is a fellow at the Joint Center for Quantum Information and Computer Science at the University of Maryland, as well as a former Perimeter Scholars International master’s student. Her new book,
Quantum Steampunk: The Physics of Yesterday’s Tomorrow (published by Johns Hopkins University Press), can be found at Chapters Indigo and Words Worth Books (Waterloo), among other booksellers.