An unconventional radio telescope and an innovative approach to analyzing an “avalanche of data” have enabled a Canadian research team to revolutionize how scientists detect and understand some of the universe’s most mysterious phenomena.

The CHIME Telescope collaboration announced this week the detection of an unprecedented number of fast radio bursts (FRBs) – brief blasts of waves from distant galaxies, the origins of which are still unknown and the subject of much theoretical research.

Though originally designed for other cosmological studies, CHIME (the Canadian Hydrogen Intensity Mapping Experiment) has become the world’s most successful FRB hunter, thanks in large part to software developed by Perimeter Faculty member Kendrick Smith and team members.

“This is a new approach to radio astronomy that can achieve really amazing results relatively inexpensively,” said Smith, who holds the Daniel Family P. James E. Peebles Chair in Theoretical Physics at Perimeter. “It’s transformative in many respects.”

Prior to CHIME, only several dozen FRBs had been detected over the decade since their discovery; CHIME discovered 13 new FRBs over a period of just two months shortly after being turned on for its first pre-commissioning phase, running at only a fraction of its full capacity. This unprecedented pace of discovery will enable scientists to study the causes and effects of these mysterious distant bursts.

The CHIME team reported their findings in a pair of papers published this week in the journal Nature, and officially announced the results on January 9 in Seattle at the annual meeting of the American Astronomical Society.

Particularly exciting to astrophysicists is CHIME’s detection of a so-called “repeater” – an FRB that flashes more than once. Before CHIME, only one repeater had been detected among the 30 known FRBs, so the new repeater confirms that these are not data anomalies, but rather provide clues as to what may be the cause of FRBs.

Theories abound as to what FRBs could be – neutron stars, black holes, supernovae, and other proposed sources – and CHIME’s FRB-finding precision is expected to accelerate the progress toward solving the mystery of their origins.

Crucial to the success of CHIME is the software, primarily developed by Smith and his growing team at Perimeter, which drives the needle-in-a-haystack precision needed to spot a millisecond blip in a torrent of data being crunched by a fleet of supercomputers.

As CHIME’s halfpipe-shaped reflectors in rural British Columbia scan the sky thanks to the rotation of the Earth, a terabyte of data cascades into its liquid-cooled supercomputers every second. That’s an “avalanche of data,” Smith says, comparable to all cellphone data in North America. Amid all that data, the CHIME software must spot – in real time – a fleeting flash from a source beyond our galaxy.

The CHIME collaboration was made possible thanks to multi-disciplinary collaboration between researchers at Perimeter, McGill University, the University of Toronto, the University of British Columbia, and the Dominion Radio Astrophysical Observatory, the BC-based facility that is the site of CHIME, operated by the National Research Council of Canada (NRC). It is supported by numerous funding agencies (primarily the Canada Foundation for Innovation, with partnership from the Provinces of British Columbia, Ontario, and Quebec).

“CHIME is a remarkable Canadian success story,” said Perimeter Institute’s Neil Turok. “It was pioneering in both its design and scientific objectives, and built by superb experimentalists at remarkably low cost. Yet it is in some respects the most powerful radio telescope in the world right now, with unique capabilities. Its success is opening a new pathway for radio astronomy and fundamental probes of the universe which will become more and more interesting in the coming decade.”

Perimeter and NRC are looking to build on CHIME’s success with two joint postdoctoral fellowships for exceptional emerging radio astronomers, announced in December.

The CHIME results open the door to new investigations, potentially with an even more powerful successor to CHIME, into how the brief blasts from distant galaxies contribute to our overall understanding of the workings and evolution of our universe.

“It’s very exciting that Canada is really leading the world in this particular part of astronomy,” said Smith. “We hope CHIME can help solve the mystery of what fast radio bursts are. There are many more measurements yet to come.”

CHIME is a collaboration of more than 50 scientists led by the University of British Columbia, McGill University, Perimeter Institute, University of Toronto, and the National Research Council of Canada (NRC). The $16-million investment for CHIME was provided by the Canada Foundation for Innovation and the governments of British Columbia, Ontario, and Quebec, with additional funding from the Dunlap Institute for Astronomy and Astrophysics, the Natural Sciences and Engineering Research Council of Canada, and the Canadian Institute for Advanced Research. The telescope is located in the mountains of British Columbia’s Okanagan Valley at the NRC’s Dominion Radio Astrophysical Observatory near Penticton.

A team of Canadian researchers has announced the first detection of a fast radio burst that repeats with predictable frequency. 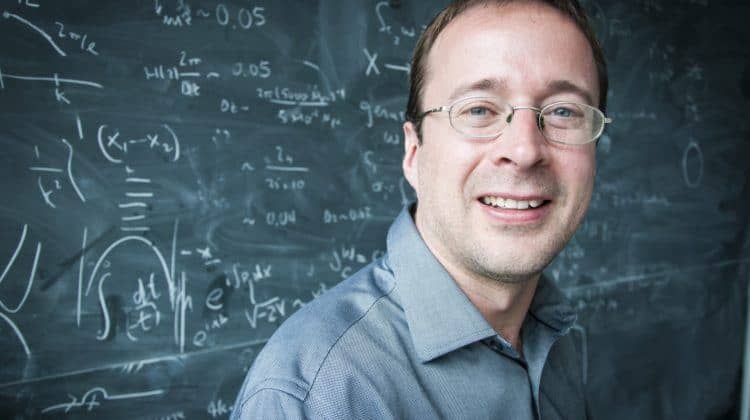 New experiments are generating more data than we can possibly store. Kendrick Smith is one of a new breed of cosmologists, mixing physics, data analysis, statistics, and more, to work out not just what we’re seeing, but what it means.