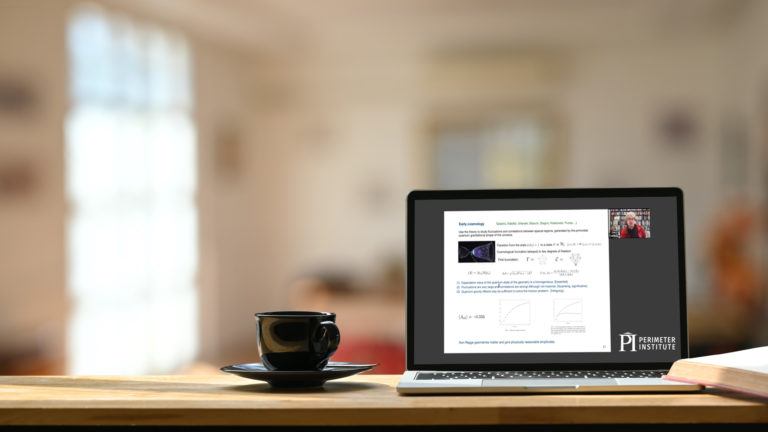 It’s 7 pm in Waterloo, 1 am in the Netherlands, 7 am in Taiwan. Physicists from around the world are gathered together – in front of their screens – to discuss elliptic cohomology at Perimeter’s first post-pandemic conference.

Johnson-Freyd expected 40 participants but ended up with almost 80. Speakers included researchers from Germany, the Netherlands, Taiwan, Singapore, the US, and Canada, with moderators from as far as China and Australia.

The conference was successful, he thinks, in part because it was small, and in part because the co-organizers and moderators had already started to build a community around the topic. “Enough people knew each other that the discussions were able to proceed in a casual and productive way.”

To help overcome time zone challenges, organizers spread talks throughout the day, with two morning sessions followed by an evening session at 7 pm EDT. “China, Singapore, and Taiwan are 12 hours off Ontario, so there really is no ‘good’ time for an international conference,” says Johnson-Freyd. Meng Guo, a Perimeter postdoc who is currently in China, stayed up past midnight to participate, then got up early to attend morning sessions.

Dear virtual conference organizers: please put time zones on your schedules. I promise, it's not obvious.

“If the main goal of your conference is distributing research ideas, Zoom is perfect,” Johnson-Freyd says. However, if you have community building and networking goals, he thinks it may be harder to reach them with a virtual conference. He also cautions against the notion that it’s necessarily easier for women in physics to attend conferences online.

Organizing an online conference and balancing the needs of participants is a new challenge now that travel is significantly restricted due to COVID-19. Stephanie Mohl, Perimeter’s conference program lead, has been working with scientific organizers for the past three months to ensure that the Institute’s renowned conference programming continues.

“Perimeter is such a draw. The interest has been phenomenal,” she says. A recent conference, Geometric Representation Theory, had more than 100 registrants, when only 44 had signed up for the previously planned in-person version.

It’s something scientific organizers are seeing elsewhere. For the first time in 30 years, the Strings 2020 conference was hosted by an institution in Africa – and this time it was held virtually, with 2,301 people registered. Previously, a large Strings meeting would have accommodated between 400 and 500 people.

Running conferences over Zoom can come with a steep learning curve: speakers and moderators require proper broadband access, and attendees need ample opportunity to participate in discussions and share their research.

“The AV staff have been heroes in all this, giving support to researchers so they can continue their work,” Mohl says, adding that they’re testing other platforms in addition to Zoom to use in the future.

In-person conferences often include an opportunity for researchers to present their work in a short talk or poster session. For Perimeter’s Quantum Gravity 2020 conference, that was done online, ahead of time.

Participants prepared two- to five-minute videos of their poster presentations for others to look at before the conference started, and there was a dedicated time during the conference itself for discussion of those presentations. Presenters could include contact info, enabling other participants to easily reach out.

Perimeter Faculty member Bianca Dittrich was a co-organizer of Quantum Gravity 2020. Not only was it the first virtual conference she’s organized, it was also the first one she attended.

“We decided to have fewer talks – we cancelled the parallel sessions – but to increase the number of discussion sessions,” she says, noting that the original in-person conference had been meant to be very interactive.

The discussions happened in several formats, both synchronous and asynchronous: Google Hangout sessions for smaller groups, Slack chat groups, and informal, virtual cocktails and dinners. Core sessions were scheduled between 9 am and 2 pm EDT, but Dittrich felt supplementing with asynchronous discussion was particularly important when attendees are in time zones around the world.

“We hope that there will be an update on the newest developments. But mainly we aimed at connecting different quantum gravity sub-communities, so we left space for lots of discussions, and introduced possibilities for networking,” she says.

Silke Weinfurtner, a Professor at the University of Nottingham and a Perimeter Visiting Fellow, is using the format of Quantum Gravity 2020 as a blueprint for a September conference she’s co-organizing as chair of the International Society of Relativistic Quantum Information (ISRQI). The society usually has one meeting per year, and Weinfurtner hopes to provide a platform for ISRQI members to meet and interact, even if it’s not in person.

Weinfurtner also presented at the Quantum Gravity 2020 conference. She’s never organized a virtual conference before, but had recently attended a couple.

“Given the current circumstances, it’s the best one can do. I am saving time on traveling, but it’s harder to participate and concentrate during all talks, as I am still having all my local commitments. This includes homeschooling,” she says. “My goal is to stay connected during the pandemic.”