Black holes have no hair. 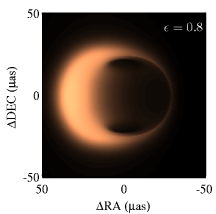 The “no-hair theorem” is a truism in physics, shorthand for the fact that according to general relativity, you can define everything there is to know about an astrophysical black hole with just two numbers: its mass and its angular momentum (that is, the speed at which it’s spinning).

All black holes with the same mass and spin, general relativity assures us, look exactly the same. This is true even if they are formed in entirely different ways, or made of entirely different material. If you were looking for the black hole that robbed a nearby dust cloud of half its mass, and you lined up several same-size-and-rotation black holes and took mugshots, there would be no way to pick the right one out of the lineup.

There’s nothing that reaches out of a black hole, nothing that distinguishes one hole from another, beyond that mass and spin. Black holes, in short, have no hair – assuming general relativity is correct.

Broderick is involved with the Event Horizon Telescope, which, over the last decade, has been studying the event horizon1 of a black hole, beginning to generate haunting pictures of the dark silhouette of the hole against the brightness of its own accretion disk.2 This is a milestone in the study of black holes: while there has been a lot of theoretical work on what the event horizon structure around black holes should look like, for the first time, physicists have real data to check their models against.

“But,” Broderick notes, “so far all this work has used models that are predicated on general relativity being right. What we’ve done in this paper is made the first steps toward relaxing that assumption, and thereby putting general relativity to the test.”

“Specifically, we broke the no-hair theorem. We added hair to our black holes.”

Through what Broderick describes as a “mathematically nasty, painful process,” the team altered their models of spacetime to give their black holes a little bulge. It’s a subtle distinguishing characteristic, but it qualifies the new black hole models as “hairy.”

The team used complex computer models to generate images of what such black holes would look like, if they existed. Then, they examined these images, searching for features caused by their alterations of general relativity (GR), rather than other factors – such as the size, spin, or the exact process by which matter fell into the black holes.

They found that altering GR would alter the shape of the shadow cast by the event horizon. “According to GR, non-hairy black holes should cast nearly circular shadows. But when you add the bulge to the black hole, those shadows become prolate or oblate – they start to look like cigars or pancakes,” says Broderick. “It’s a clear observational signature – something we can actually go look for.”

So look for it they did. The researchers took their mugshots of hairy and non-hairy black holes, and went to see which one best matched the actual observation of Sagittarius A*, the supermassive black hole at the centre of our galaxy. “There are very good images of Sag A*,” says Broderick. “The biggest feature in these images is the shadow of the black hole.” That is, of course, exactly the aspect of the image the team was interested in.

The team compared the real image data about the shadow with the lineup of black hole mugshots generated by the models. This allows them to put limits on how big a tweak to general relativity would be allowed by the data – how hairy black holes could possibly be.

So far, the team can rule out big effects – black holes can’t have a mop of hair like Einstein’s – but not small ones. In fact, a first glimpse at early data suggests that the mugshot from a black hole with a little bit of hair might match the real picture best. But that’s such a small effect that it can easily be explained by the fuzziness of the pictures.

The real importance of this work is that it’s a proof of concept: it proves that physicists can use black holes as natural experiments to test ideas about spacetime. “These are the first efforts to look at what spacetime is really doing near a black hole,” says Broderick. “This is proof that we can get traction on the gravity problem.”

“The best thing about this story is that data that we’re comparing our model to was taken in 2009,” says Broderick. “It’s 2014 now. The Event Horizon Telescope has been taking data every year. There’s a lot more stuff we can look at.” Soon, Broderick hopes, the team will be able to tell exactly how much tweaking general relativity can take, and possibly even test whether general relativity is correct.

The new paper is forthcoming in The Astrophysical Journal.

2  What’s an accretion disk? Black holes are often surrounded by clouds of dust – matter which has been pulled close to the black hole and is now spiralling inward. As it falls, it shines. By the time an object crosses the event horizon, it’s given up a good fraction of its rest mass as radiation. This bright, spinning disk of matter is known as an accretion disk.