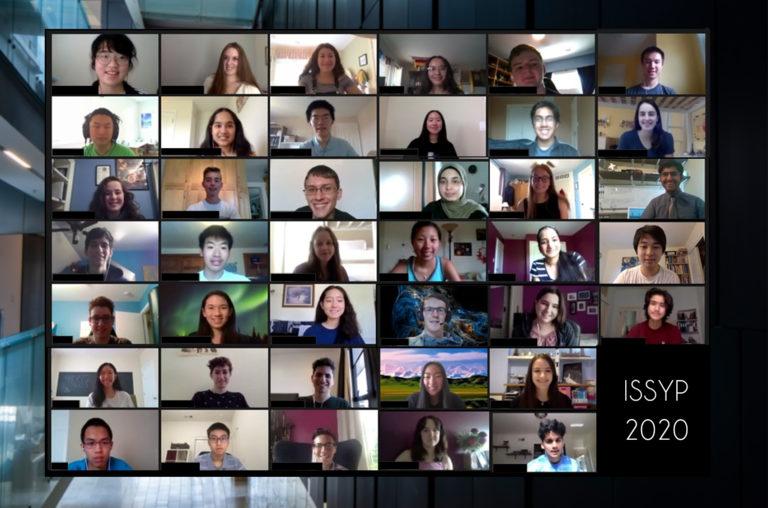 The black box wasn’t actually a box. It was an opaque PVC tube, capped at both ends, with four pieces of rope hanging from its sides. It looked simple. But for nearly an hour, a group of 40 teenagers grew increasingly perplexed at its inner workings. Tug on any given string, and the other ones get pulled into the tube. How were they connected inside? They were determined to find out.

“What happens if you pull on more than one string at a time?” asked one student.

“If you flip it upside down, do the top strings still go in first?” another pondered.

In small groups, the teens worked together to come up with models that could explain the behaviour of the strings. One group suggested that there could be two separate strings, looped together in the middle. Another thought that the strings were connected by a ring or a pulley. A third group proposed that each of the four strings could be tied to a longer piece of string inside.

Perhaps most remarkably, all hypothesizing was done without the students ever holding the tube in their hands.

The activity – which emphasizes making observations, building models, and testing predictions – illustrates the process of science. It’s a staple that is often used to kick off Perimeter’s International Summer School for Young Physicists (ISSYP), an annual program that invites students interested in physics to immerse themselves in Perimeter’s environment.

This year, thanks to the ongoing pandemic, ISSYP looked a little different: it was held entirely online, with lessons presented via Zoom and augmented with virtual interactives.

Some things, however, remained the same. As usual, the program lasted two weeks, with physics lectures on topics including relativity and quantum mechanics interspersed with fun activities and socializing. There was still gender parity among program participants, and half of the students hailed from across Canada, with the other half logging in from international locales (selected from applicants in the same time zones as Canada, to simplify coordination). And though they never met in person, the students all espoused the same curiosity and excitement for physics.

“I was kind of nervous that it was going to be online,” said Akshita Gorti, a 17-year-old from Virginia. “But actually, I really like how everybody is very welcoming. I still feel like I’m collaborating with very intelligent people who know a lot about physics and are helping me learn a lot more.”

Noa P., a student from Toronto, shared similar sentiments. “I didn’t really know what to expect with it being virtual, but it’s still been fantastic,” she said. “I’ve never met anybody who is as enthusiastic as I am about physics. Whether we’re playing a black hole virtual escape room, or a physics-themed Jeopardy! game, or just learning about the twin paradox, it’s been so much fun to engage with all of these people – to engage with people who love it just as much as I do.”

The engagement that arises organically when students are brought together in person received a deliberate boost from Perimeter’s Educational Outreach team this year. At the beginning of each ISSYP session, students were divided randomly into breakout groups of four to five and given a few minutes to chat on their own. Many students also connected outside of program hours through a communal Facebook chat.

“We would just talk and get to know people at the beginning of every single day,” said Noa. “Sometimes it would just be us chatting, and sometimes it would be us discussing our favourite book, or favourite sci-fi movie. Sometimes it was something that you’re most proud of, like a kind of show-and-tell type thing. Just getting to know each other like we would have if we were in person.”

“I did all my second semester classes on Zoom, so it’s not too unfamiliar,” said Greyson Gould from Smithers, BC, who is going into Grade 12 in September. There was one key difference, however, from typical group projects that he’s done. “Everyone is always participating and everyone wants to learn, which I can’t say most of the groups I’ve worked with in school always do.”

“I find it neat seeing how everyone thinks about stuff, how they conceptualize problems,” Gould added. He decided to apply to ISSYP because physics seemed like a good way to combine his interests, which include problem solving and mathematics. “Plus, it’s actually applicable in the real world – which is becoming more important to me, looking at the world economy right now.”

“I was surprised by how collaborative it is. I expected it to be a lot more competitive,” said Alice Le, who was participating from Missouri. “But it’s been a really good surprise and it’s very collaborative.”

Participants even took on the challenge of running an experiment across time zones and borders when they were tasked with creating a magnetohydrodynamic drive – a device that causes water to flow through the use of a battery, magnets, and wires. The students set up the devices in their own homes and set out to compare how various factors would affect the rate of water flow.

“I’m glad we had hands-on activities where we can still experiment and try to find out what’s going on,” Gorti said. “It’s not just all virtual, so it’s nice.”

Ólin Costa, a 17-year-old from Brasília, Brazil, appreciated the “Reflect and Review” and “Life as a Physicist” sessions, which provided students a chance to chat with expert physicists on a variety of topics.

Costa plans to take his newfound problem-solving techniques and use them to help tutor other students at his school through a program called Project Feynman. “Our main goal was to have other students from our school get the grades they needed to finish the school year,” Costa explained. “So we started by recording classes to YouTube and giving review classes before tests.”

With the pandemic affecting in-person classes, Costa says Project Feynman has ramped up to help fill in the gaps: “Since the quarantine started, we have, I think, more than 200 videos recorded for the project.” In his role as a physics tutor, he said, “The knowledge which I got here in ISSYP will certainly help me to improve my classes, and help me to help people.”

For Noa P., ISSYP has cemented her desire to study physics in the future. “I’ve always known that I’ve been interested in physics, but I felt like all of this – all of the content that we’ve learned – has been so exciting and intriguing that I want to pursue it even more,” she said. “I’m just so curious and excited about it. And the extent to which that level of curiosity has gone up is immeasurable.”

Near the end of the program, students were once again grouped together in breakout rooms and asked what advice they would give to future ISSYP participants. “Don’t be afraid to ask questions,” said one group. “Don’t be afraid to learn something new, even if it might seem daunting.”

RBC Foundation is the Presenting Partner of ISSYP.