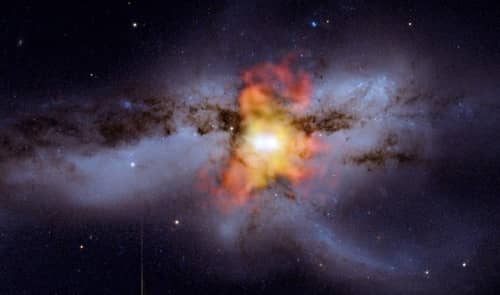 A new paper published in Science by PI Associate Faculty member Luis Lehner, Carlos Palenzuela (Louisiana State University and the Canadian Institute of Theoretical Astrophysics) and Steven Liebling (Long Island University) indicates that as two supermassive black holes move toward each other and ultimately coalesce, powerful jets of electromagnetic radiation are released. Because the jets are released in advance of the merger, they may provide an “early warning system” to astronomers seeking to observe these events directly with gravitational wave detectors that are now being developed.

According to Prof. Lehner, “This gives us a chance of getting there to see the main event.”

Most galaxies are thought to contain supermassive black holes, which are as yet poorly understood. Since many galaxies collide and merge, many may in fact contain two-black hole systems which orbit one another and ultimately coalesce. Data from the Chandra X-Ray Observatory and the Hubble Space telescope have given observational evidence of black hole mergers (see image at right).

The model developed by Prof. Lehner and his colleagues is the first to incorporate the interaction of two black holes with their surrounding plasma of electrons and positrons, which is created by orbiting disks of gas and dust around them. The merging black holes’ orbital motion stirs the plasma, inducing two extremely powerful jets of radiation from each black hole. These jets are theoretically detectable from two to six billion light years away, and thus could provide “tracers” of impending black hole mergers.

Unlike electromagnetic radiation (such as visible light), gravitational waves are not scattered by intervening objects as they travel through space. Thus, they carry “pristine” information about the forces and fields that created them, and for this reason are highly sought to provide clues to many puzzles in theoretical physics.

Gravitational wave detectors such as the Laser Interferometry Space Antenna (LISA) and the Laser Interferometer Gravitational Wave Observatory (LIGO) should be deployed within the decade. It is hoped that they will open a new window on the universe that could be as transformative to our understanding as the optical telescope. However, the detection and understanding of these new signals will rely on the theoretical underpinning provided by the complex numerical simulations performed by Prof. Lehner and others.

According to Prof. Lehner, “One thing that gravitational wave detectors such as LISA won’t tell us is the precise location that the signal is coming from. We need a counterpart. Electromagnetic waves can be precisely localized, so by combining the two, you remove the ambiguity.”

Prof. Brian McNamara, University Research Chair in Astrophysics at the University of Waterloo, commented, “One of the outstanding questions in science that we hope to answer in coming decades is how supermassive black holes — black holes that are a billion times more massive than the Sun — came into being. We believe they achieved their great sizes in part by gobbling up other black holes during the process of galaxy formation. This new result by Luis and his collaborators suggests that by combining data from powerful radio telescopes and from the future, Earth-orbiting gravitational wave telescope, LISA, we may be able to witness the process of black hole formation in exquisite detail.”

Prof. Lehner and his colleagues are now developing more detailed models of black hole merger dynamics that will incorporate factors such as spin and black holes of differing sizes. He says, “This is just the tip of the iceberg. There is a whole family of different systems that we haven’t been able to understand because we only see the big burst of electromagnetic radiation afterwards — that helps, but we cannot probe deeply enough to see what’s going on at the very core. For that, gravitational waves are the key to understanding. Now with the two together you can do some amazing science.”