Researchers say newly discovered planets offer best opportunity to look for atmospheres and biosignatures of life outside our solar system. 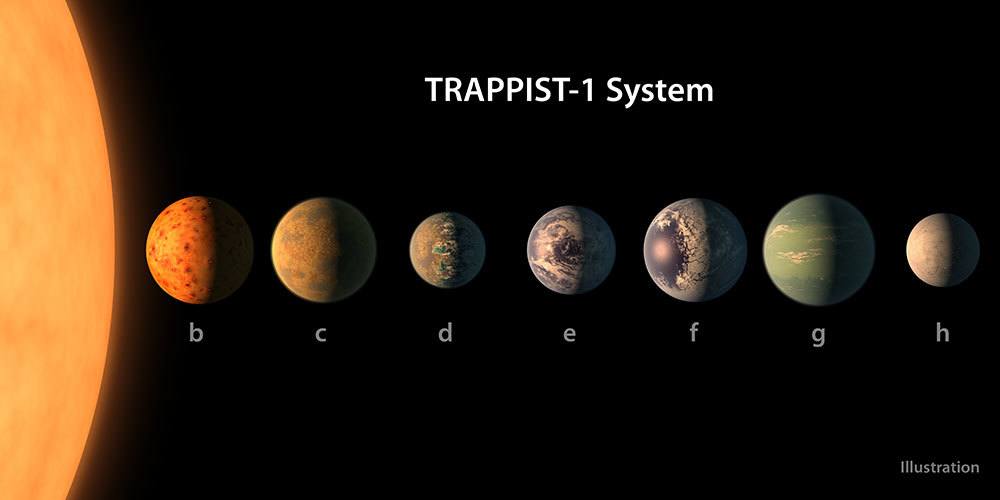 As outlined in a new paper published in Nature today, three of the exoplanets in the Trappist-1 system are in the habitable zone, where liquid water could pool on the surface.

Thomas Zurbuchen, associate administrator of the Science Mission Directorate at NASA Headquarters in Washington, said that, with the right atmospheric conditions, there could be water on the exoplanets. That makes these newly discovered exoplanets the best target for follow-up studies looking at atmospheres and biosignatures of life outside our solar system.

“Finding a second Earth is not just a matter of if, but when,” Zurbuchen said.

Five researchers spoke at the announcement, including MIT professor and exoplanet hunter Sara Seager. “The Trappist-1 system has really captured our imagination,” Seager said. “With this amazing system, we know that there must be many more potentially life-bearing worlds out there just waiting to be found.”

The discovery was made using the NASA Spitzer telescope. Researchers now expect to use the Spitzer, Hubble, and other telescopes to learn more about the system, which is located in the constellation Aquarius. Next year’s planned launch of the James Webb Space Telescope is expected to greatly expand those capabilities to study the exoplanet atmospheres and look for gases that might indicate life (Perimeter Institute hosts a free, live webcast about the James Webb Space Telescope on Wednesday March 1 at 7 PM ET).

In 2015, Seager visited Perimeter Institute to discuss her work at the Convergence conference. At that time, she was certain big discoveries were imminent, describing this as an “exceptionally historic” moment in exoplanet research.

“I think people will look back at us as the generation who first found the Earth-like worlds,” she said at the time.

MIT professor Sara Seager discusses exoplanets, and the bid to find them

The study of exoplanets has been heating up in recent decades, but that doesn’t mean the research was straight-forward. During her Perimeter visit, Seager explained that even the simplest questions posed challenges.

For example, it was long assumed that planet formation consistently followed the example of the Milky Way, with rocky planets close to the sun and big planets further out. But scientists detected giant exoplanets closer to their star than Mercury is to the sun. “That whole theory was totally upended,” she said. “For exoplanets, we actually see that anything is possible.”

The big question – whether or not there is life beyond Earth – also required a significant shift in approach. Instead of looking for Earth’s biosignature gases, the scope needed to be broadened to account for other avenues of life.

“The question is, what should we be looking for? It sounds like an innocent question to start with, and until now most people focused on Earth’s biosignature gases,” Seager said. “We want to look for gases that don’t belong, so we truly have to be prepared for any gas, any small molecule.”

An age of excitement

The paper’s lead author, Michael Gillon from the University of Liege in Belgium, described the discovery as personally very exciting. “I’ve devoted my life to this goal,” he said of the quest to detect Earth-like planets. “We’re getting nearly there with this result.”

Seager said it was particularly satisfying, given that when she started studying exoplanets it was often derided as akin to stamp collecting: it offered things to look at, but little else.

“We’re really excited. We’re the group of people – us and all of our colleagues – [who] are pioneers. This is a search that will go on for many generations.”

To celebrate the discovery, NASA issued a new addition to its popular series of downloadable posters. You can get your own version of the poster here.

Exoplanet research is expected to be further accelerated by the launch next year of the James Webb Space Telescope. Tune in live on Wednesday March 1 when NASA researcher Amber Straughn discusses the telescope in a free, live webcast from Perimeter Institute. Watch the trailer: