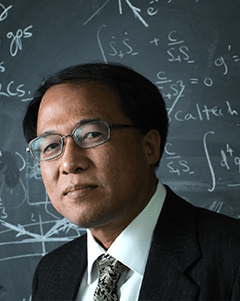 Condensed matter physics – the branch of physics responsible for discovering and describing most of these phases – has traditionally classified phases by the way their fundamental building blocks – usually atoms – are arranged. The key is something called symmetry.

To understand symmetry, imagine flying through liquid water in an impossibly tiny ship: the atoms would swirl randomly around you and every direction – whether up, down, or sideways – would be the same. The technical term for this is “symmetry” – and liquids are highly symmetric. Crystal ice, another phase of water, is less symmetric. If you flew through ice in the same way, you would see the straight rows of crystalline structures passing as regularly as the girders of an unfinished skyscraper. Certain angles would give you different views. Certain paths would be blocked, others wide open. Ice has many symmetries – every “floor” and every “room” would look the same, for instance – but physicists would say that the high symmetry of liquid water is broken.

Beginning in the 1980s, condensed matter researchers, including Xiao-Gang Wen – now a faculty member at Perimeter Institute – investigated new quantum systems where numerous ground states existed with the same symmetry. Wen pointed out that those new states contain a new kind of order: topological order. Topological order is a quantum mechanical phenomenon: it is not related to the symmetry of the ground state, but instead to the global properties of the ground state’s wave function. Therefore, it transcends the Landau paradigm, which is based on classical physics concepts.

Topological order is a more general understanding of quantum phases and the transitions between them. In the new framework, the phases of matter were described not by the patterns of symmetry in the ground state, but by the patterns of a decidedly quantum property – entanglement. When two particles are entangled, certain measurements performed on one of them immediately affect the other, no matter how far apart the particles are. The patterns of such quantum effects, unlike the patterns of the atomic positions, could not be described by their symmetries. If you were to describe a city as a topologically ordered state from the cockpit of your impossibly tiny ship, you’d no longer be describing the girders and buildings of the crystals you passed, but rather invisible connections between them – rather like describing a city based on the information flow in its telephone system.

This more general description of matter developed by Wen and collaborators was powerful – but there were still a few phases that didn’t fit. Specifically, there were a set of short-range entangled phases that did not break the symmetry, the so-called symmetry-protected topological phases. Examples of symmetry-protected phases include some topological superconductors and topological insulators, which are of widespread immediate interest because they show promise for use in the coming first generation of quantum electronics. In the paper featured in today’s issue of Science, Wen and collaborators reveal a new system which can, at last, successfully classify these symmetry-protected phases. Using modern mathematics – specifically group cohomology theory and group super-cohomology theory – the researchers have constructed and classified the symmetry-protected phases in any number of dimensions and for any symmetries. Their new classification system will provide insight about these quantum phases of matter, which may in turn increase our ability to design states of matter for use in superconductors or quantum computers.

This paper is a revealing look at the intricate and fascinating world of quantum entanglement, and an important step toward a modern reclassification of all phases of matter.

Regarded as one of the world’s leading condensed matter theorists, Xiao-Gang Wen holds the BMO Financial Group Isaac Newton Chair at Perimeter Institute for Theoretical Physics. The BMO/Newton Chair was established by a $4 million gift from the BMO Financial Group in 2010 and, in 2011, Wen joined Perimeter from MIT as its inaugural occupant. Read a lay-accessible overview of his research.