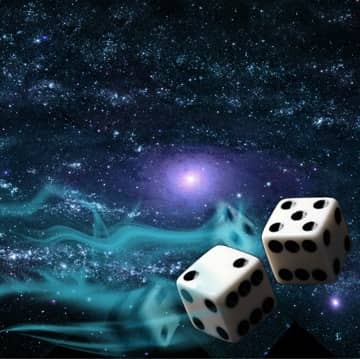 “Not only does God play dice with the universe,” said Roger Colbeck, “his dice are fair.”

Colbeck, a postdoctoral researcher at the Perimeter Institute for Theoretical Physics, has just published a paper entitled “No extension of quantum theory can have improved predictive power,” in Nature Communications. “If quantum theory is correct, then it is also complete,” says Colbeck. “There cannot be a better description of the outcomes.”

The probabilistic nature of quantum predictions troubled many early quantum scientists, including Einstein, who famously objected that “God does not play dice with the universe.” In the 1930s Einstein, Podolsky, and Rosen (among others) argued that even if quantum mechanics is a correct theory, it might not be a complete one: there might be a deeper reality – perhaps hidden variables that if measured could allow scientists to predict outcomes without quantum uncertainty. This proposition is so famous that it’s known by its acronym: EPR.

In the 1960s J.S. Bell’s eponymous theorem showed that no local hidden variables exist which would take all the uncertainty out of quantum mechanics. But can we take out any of it? That’s been a door left ajar for half a century.

Colbeck – working in collaboration with Renato Renner from ETH Zurich in Switzerland – has closed that door. This new research shows that no uncertainty can be removed.

This conclusion is reached partly via a connection to quantum cryptography. Imagine two people, Alice and Bob, trying to establish a shared key that no one else knows, which they might use to send secret messages to each other. In quantum cryptography, the key might be generated by first sharing and then measuring a series of entangled particles. If a “bad guy” sits in between Alice and Bob, the only way he can gain information about the key is by disturbing the entanglement. Hence, Alice and Bob can detect any attempted interception.

The intriguing thing, to Colbeck, is that Alice and Bob can generate a secure key without needing to know anything about how the measurement devices operate. In an extreme case, one might imagine that the bad guy somehow got his hands on the device, and corrupted it as he pleases. Remarkably, this does not present a problem: even if the bad guy designs and supplies the device himself, Alice and Bob can perform tests to establish that the measurement outcomes are nevertheless secure.

That’s called device independence, and to Colbeck, it’s a powerful tool. It lets you replace “the bad guy” with “the universe.” In this way, the device-independent cryptographic result can be used to derive a result in quantum foundations.

In other words: If there were hidden variables, as EPR proposed, then the universe could use them to determine what the device would output. Since no one and nothing can predict – or even slightly influence – outputs in this way, then there are no hidden variables, not even weak ones, and quantum predictions generally cannot be improved.