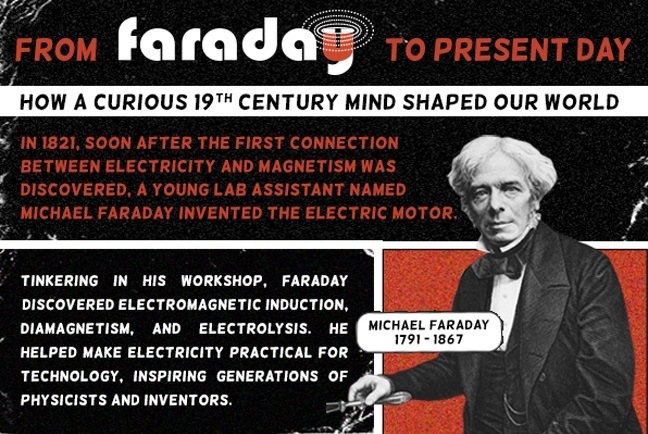 Michael Faraday once wrote: “Nothing is too wonderful to be true, if it be consistent with the laws of nature.”

Even Faraday himself, however, could scarcely have imagined the wonderful things that would become true thanks to his pioneering work in deciphering the laws of nature.

To commemorate Faraday’s legacy, we present this primer on his discoveries and their influence on the scientists who followed.

Michael Faraday represents the power and importance of fundamental, curiosity-driven science. Though he had little formal education, he possessed an insatiable curiosity and a relentless desire to unveil the truth. He did not set out to spark a technological revolution, nor inspire generations of scientific successors; those were merely consequences of his dogged quest for understanding.

The primer above only scratches the surface of Faraday’s work and influence. He was also, for example, a talented chemist who discovered benzene and invented a prototype Bunsen burner. He investigated the effects of industrial pollution, making him a kind of early environmental scientist. He was committed to public outreach and education, delivering a series of beloved Christmas Lectures for young people at the Royal Institution in London.

Of course, Faraday’s discoveries could not have happened without the generations of scientists who preceded him, nor does the story above convey the essential contributions of many brilliant minds who followed. Scientific progress, as Newton said, is made “on the shoulders of giants,” and Faraday is one giant among many – some celebrated, some unheralded – in the ongoing adventure of science.

Faraday was an exemplary scientist: curious, driven, and eager to share the wonder of his work with the world.

Want to receive upcoming Slices of PI? Sign up here.