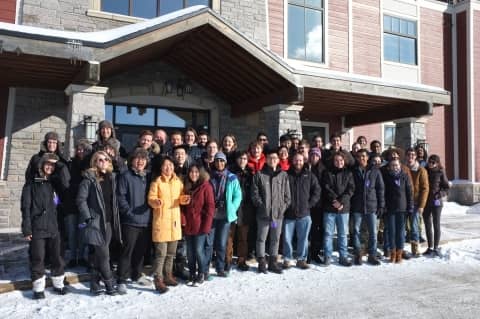 When I first heard that PSI was planning a Winter School in Huntsville, Ontario, a quick Internet search delivered beautiful pictures of sunsets, lakes, and couples relaxing on chairs at lakeside.

A few weeks later, we drove past a snow-covered sign reading “Sandy Beach” on our way to go cross-country skiing. It was clear that I was now far away from my sunny home of Brazil.

Like most of my fellow “PSIons,” I came to Canada in the autumn. This winter, despite being a warm one according to the locals, has been one of the coldest seasons of my life. This was foreseen by Perimeter Academic Programs Director James Forrest, who realized that the best way for visitors to survive a Canadian winter is to embrace it.

There were six small research groups, led by Perimeter faculty, associate faculty, and postdoctoral and doctoral researchers, with topics ranging from the mathematical depths of string theory to the heavily numeric computations of condensed matter physics.

My group, led by Perimeter PhD student and ex-PSIon Vasudev Shyam, sought to understand the thermal (or Hawking) radiation from black holes, from the point of view of the so-called conformal anomaly. This was an ambitious project with a great deal of new physics involved for all the group members. After much discussion among ourselves, reading papers, and performing calculations, we finished the week feeling comfortable dealing with a topic that was completely unknown to most of us just one week before.

We spent each morning immersed in research, then after lunch excitedly crammed inside a classic yellow school bus for an afternoon of Canadian winter, trying out cross-country skiing and skating at Arrowhead Provincial Park, and learning about maple syrup production at a sugar shack.

Sure, my skiing skills left me tailing the rest of the group during our 5.3 km cross-country trek around Arrowhead Lake, but that delivered an unexpected bonus: Academic Programs Assistant Erica Goss skied beside me without a coat, her bare Canadian arms somehow immune to the cold that I felt acutely.

I also learned first-hand of the pleasures of maple fudge and butter, and the distinct feeling of a tailbone meeting hard ice while attempting to ice skate – two truly Canadian moments I hadn’t experienced until then.

By the end of the week, what were the outcomes of the Winter School? Some groups were able to pull off amazing research results – publication may be pending. My group didn’t quite reach a breakthrough, but the experience earned from this concentrated effort to understand a new subject through a different research method was, in my opinion, worth it.

The sudden getaway during Canadian winter brought people together in an original way. By sharing a snack with a colleague at the pub, falling together on ice skates, and playing cricket during a snowy Australia Day, I got to know and appreciate my classmates and Perimeter colleagues in a way that would have proven nearly impossible during the regular semester.

And the breathtaking view of a completely white lake, the largest surface of pure white I have ever seen, will certainly stay with me. Maybe one doesn’t really need a “Sandy Beach” to create great memories, after all.