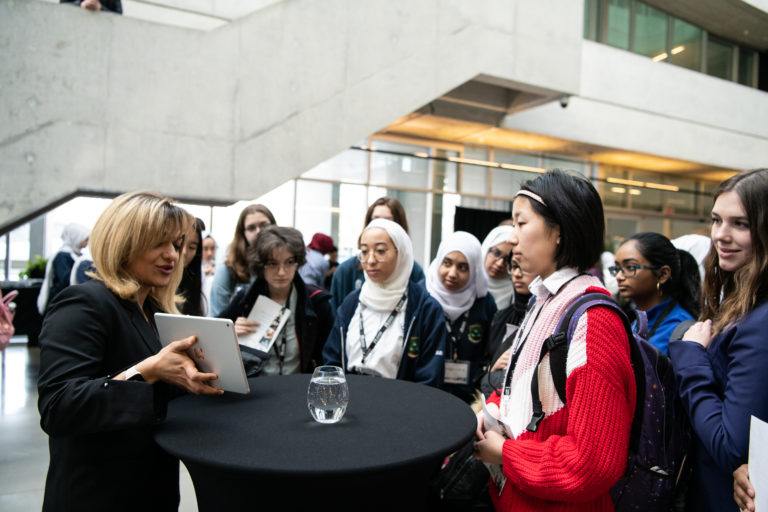 The speakers were extraordinary: A theoretical astrophysicist and dynamic science communicator with an upcoming book about the end of the universe. A CEO whose STEM background helps guide an automobile-parts manufacturing company with more than 29,000 employees in 17 countries. A biologist studying a difficult-to-treat class of breast cancer that is most prevalent in young Black women.

They also all happened to be women.

Classrooms full of students joined online as Perimeter broadcast the event live from the Institute’s Mike Lazaridis Theatre of Ideas. (The programming, which included keynote speakers and a panel discussion with accomplished women in STEM, can also be seen on Perimeter’s YouTube channel.)

As usual, the conference mixed science with discussion of the rewards, challenges, and possibilities of a STEM career.

Astrophysicist Katie Mack talked about the mysteries of dark matter, but also gave advice on the mindset young scientists should adopt. “There’s this myth that if you’re meant to be a physicist, it will come easy to you. That’s just ridiculous. This is hard. If you’re starting something new, it’s going to be hard. That doesn’t mean you’re not good at it. Don’t be afraid to work hard.”

Cancer biologist Juliet Daniel spoke about her discovery of the Kaiso gene and its importance in triple negative breast cancers, but also spoke candidly about what it’s like to be one of the few Black women science professors at McMaster University.

The panellists wrapped up their appearance by answering the question: what’s the one thing you wish you knew in high school? Data scientist Sarah Sun said, “Be curious, be bold, and be courageous. It’s okay to be scared, but stay curious.” Jessalyn Teed, a pilot and advocate for women in aviation, gave the following advice: “Network, network, network. Seek out community.”

That message resonated with Robin Nash, a 17-year-old in Grade 12 at Earl Haig Secondary School in Toronto. “Successful people go around and ask people for things – and they get lifted up, slowly,” she said. “You just have to be networking. We’re always taught to study hard, but that’s really just a small aspect of it.”

Vanessa Raponi, an engineer who works in developing toys like remote control cars, spoke of growing up poor and overcoming mental illness and childhood abuse. “A lot of you are 14 to 18 years old, and you’re going through some things,” she said. “I don’t want you to be intimidated, seeing successful women on this stage. I want you to know that scientists come from hard places, too.”

Hind A. Al-Abadleh, a professor of chemistry and an expert on atmospheric chemistry and climate change, advised students who don’t know what they want to do to look up the UN’s sustainable development goals. “There are 25 of them. Pick one and think about what you can do to tackle it. End world hunger! Opportunities come disguised as challenges,” she added. “The world needs girls to take them on.”

Watch the keynotes and discussion panel: