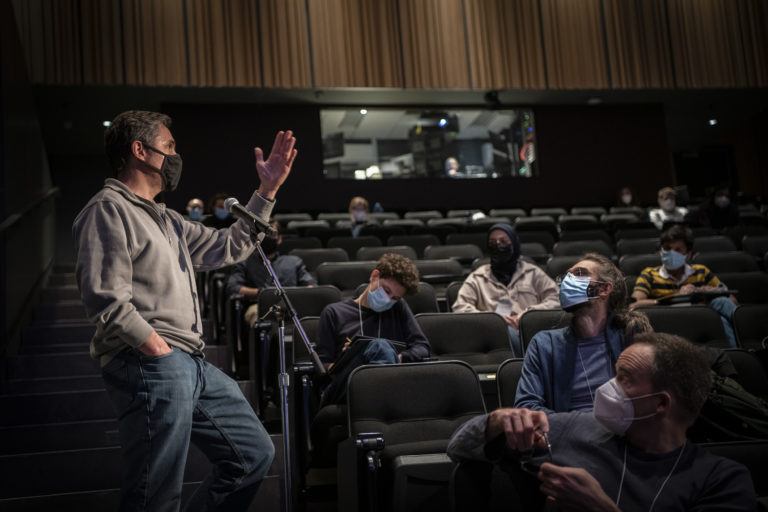 In the midst of the chatter about gravitational waves in Perimeter’s Black Hole Bistro, Maya Fishbach could feel a special kind of energy that has been hard to detect during two years of a global pandemic.

“We’ve been pretending for two years that we can do things completely remotely, as if science isn’t social, but that’s not the case,” says Fishbach, a researcher from Northwestern University in Illinois who was one of the speakers at Perimeter’s first in-person scientific workshop since the COVID-19 pandemic hit.

For gravitational wave researchers, who are in a new and rapidly evolving scientific field, getting together to talk about methods and results has become increasingly important.

The five-day workshop, “Gravitational Waves Beyond the Boxes II,” was a hybrid, offered both in person and online. But the 40 researchers and students who participated in person once again filled a physical space that was designed for collaboration.

Perimeter’s blackboard-lined think spaces, informal interaction areas, intimate theatre, and welcoming bistro were filled with conversations that researchers and their students have missed deeply since the pandemic lockdowns began in Canada in March 2020.

It remains to be seen whether the pandemic waves will fully subside and a more permanent “back to normal” slate of activities can resume this year, but the in-person event in early April offered researchers hope in the form of a temporary respite from Zoom fatigue.

Patricia Schmidt, a researcher from the University of Birmingham who also spoke at the workshop, says it has been rare for her to meet with other gravitational wave experts in person, aside from an event at UCLA late last year that was part of a longer in-residence program. Many of her recent talks have been confined to Zoom meetings. 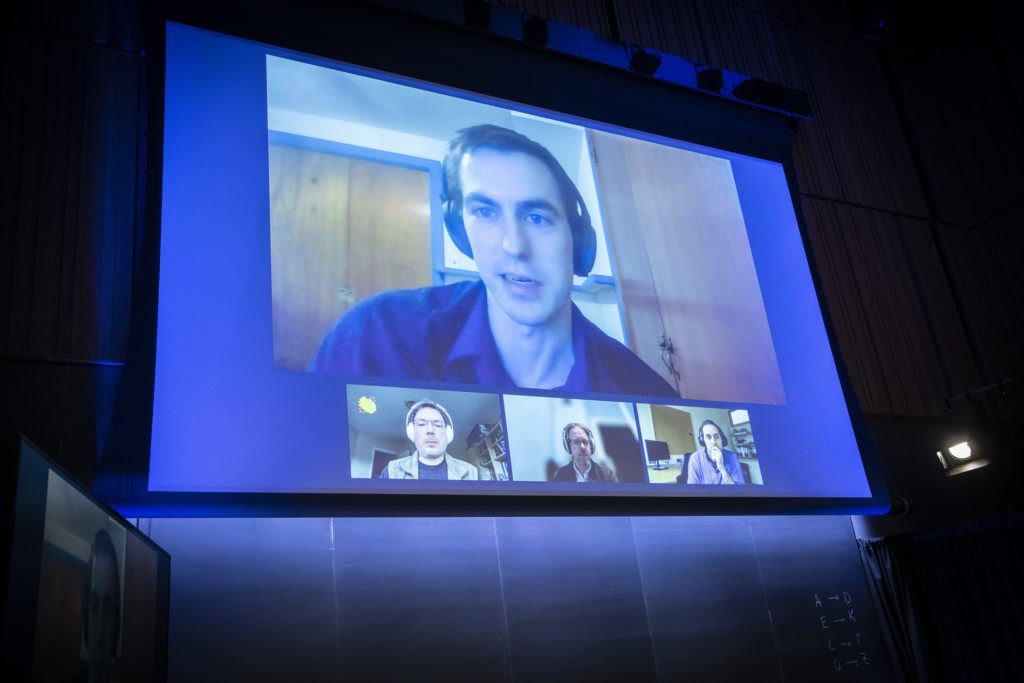 “Most of the great ideas today are not born in isolation,” Schmidt says. “They come from interactions, talking to people, bouncing ideas off each other, attending talks that may be related to your research, but not necessarily something you are working on right now. That is what inspires and sparks new ideas.”

Personal interactions are especially important to graduate students and postdoctoral researchers at the beginning of their careers, she adds. “It’s so important for them to build those networks, get to know their peers, and learn to interact at the professional scientific level.”

Reed Essick, a postdoc in strong gravity research at Perimeter, says that while the Perimeter technical support team has been fantastic at supporting the virtual online talks, the “little interactions” at in-person events are important.

“You’re having coffee and you hear something that someone said and you think, ‘Oh, wait, hold on,’ and it sparks an idea. It is easier to say, ‘Can you explain that in a little more detail?’ rather than send an email.”

Luis Lehner, a faculty researcher in strong gravity at Perimeter, describes it as an inclusive umbrella that brings together senior researchers and younger people from different parts of the world and gives them a chance to get to know one another.

Video conferencing technology has the advantages of reducing travel time and carbon footprint and is less expensive, but there is an element of serendipity at in-person meetings that is hard to replace, he adds.

“Until technology advances a heck of a lot more, some component of face-to-face will be irreplaceable,” Lehner says.

The workshop was held at a critical time as a whole new era in astrophysics and strong gravity research is opening up.

The first historic detection of gravitational waves, produced in a black hole merger about 1.3 billion light years from Earth, was announced by the Laser Interferometer Gravitational-Wave Observatory (LIGO) in 2015.

Although Albert Einstein had predicted these “ripples in spacetime” in his theory of general relativity a century earlier, being able to detect them produces data about what really happens when extreme cosmological objects like black holes or neutron stars spiral into each other and eventually merge.

Since 2015, the wealth of data has grown enormously. At least 90 confirmed detections of such events have been catalogued so far, including a recent trove of 35 events recorded over the course of 21 weeks, an average detection rate of one event every 4.2 days.

In the future, new detections will be coming not just from the LIGO sites in Louisiana and Washington State and their sibling gravitational wave detector, Virgo, in Italy, but also from the new KAGRA detector in Japan, which joined the search in 2020. “We anticipate one per day going forward,” says Schmidt.

The data will give scientists more precise details about many other black holes and neutron stars of different sizes as they orbit closely to one another, generating gravitational waves. But these extreme gravitational events will also allow scientists to further test Einstein’s theory of general relativity, which describes gravity, says Huan Yang, one of the co-organizers of the workshop, who is a researcher at the University of Guelph and an associate faculty member in strong gravity at Perimeter. 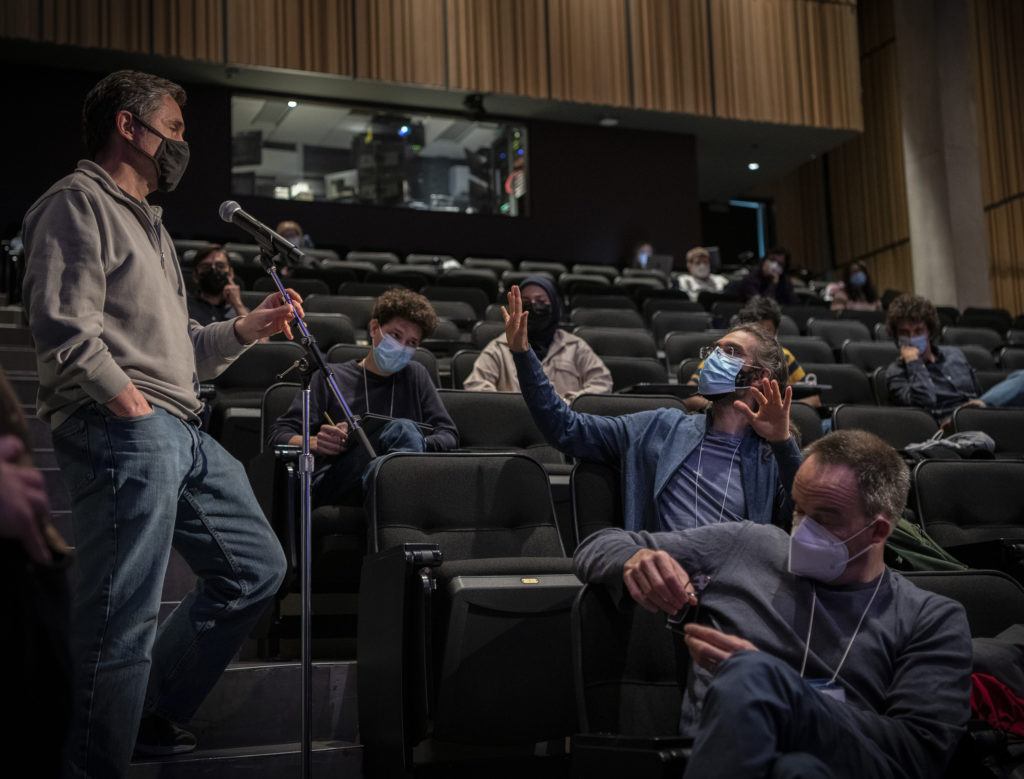 That could help physicists in their quest for a unified theory that combines gravity and what we know about the fundamental particles and forces in the universe. It may also lead to the discovery of new forces or particles that might be candidates for dark matter, Yang adds.

“Gravitational waves produce clean signals that can really help us understand what is going on,” he says.

But Schmidt says the wealth of data also presents new challenges because “now we are in the large-number statistics regime.”

Fishbach says much of the discussion at the workshop was about the challenges of transitioning from an era of a handful of detections to a large number of them.

“A big part of it is figuring out what are the interesting questions that we actually want to answer now that we have this huge data set,” Fishbach says. It’s also about making sure there are good tools available for analyzing all these data and clearing up any uncertainties about what the data are saying, she adds.

Despite the challenges, these large data sets are exciting treasure troves of discovery that will provide plenty of work in the coming years for young researchers.

“I think we are in this transition stage, going from detecting these mergers to really understanding them in a more precise way,” Yang adds. “The timing for this workshop is great because many of the topics being discussed are about the opportunities and challenges. It’s about how we make this transition and how we should prepare for future detections.”

When Yang was a PhD student at the California Institute of Technology, gravitational waves were known about from Einstein’s theory but were ephemeral. They emanated from equations on blackboards and on paper, but no one knew if they could ever really be detected. But now, they are real.

“You believe inside it is true, but then when it really becomes true, it feels different. That’s really exciting,” Yang says.

With even more data coming in and possibilities for answering deep questions about how gravity works, the excitement will grow, says Essick. But he adds that answering these questions will require teamwork, which is why in-person conferences and workshops are so important in this burgeoning new research field.

“There are so many different pieces that we need to understand, and it’s too much for one person, so you need a team. It’s great to be able to bring a team here to talk about the work and make an action plan,” he says.