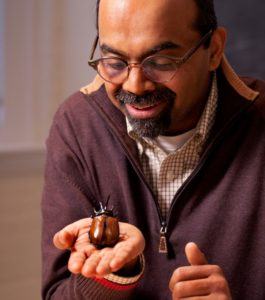 Watch the webcast on this page on Wednesday, May 5 at 7 pm ET.

Earth is home to millions of different species – from simple plants and unicellular organisms to trees and whales and humans. The incredible diversity of life on Earth led Charles Darwin to lament that it is “enough to drive the sanest man mad.”

How can we make sense of this diversity of form, which arises from the process of morphogenesis that links molecular- and cellular-level processes to conspire and lead to the emergence of “endless forms most beautiful,” as Darwin said?

In his May 5 Perimeter Public Lecture webcast, Harvard professor L. Mahadevan will take viewers on a journey into the mathematical, physical, and biological workings of morphogenesis to demonstrate how scientists are beginning to unlock many of the secrets that have vexed scientists since Darwin.

Mahadevan is the de Valpine Professor of Applied Mathematics, Physics, and Organismic and Evolutionary Biology at Harvard University, and has been named a Guggenheim Fellow and a MacArthur Fellow. He is also a Fellow of the Royal Society of London.

Tune in on Wednesday, May 5, at 7 pm ET, for this fascinating foray into the inner workings of life on Earth, and subscribe to Perimeter’s YouTube channel for all the latest webcasts and other science videos.