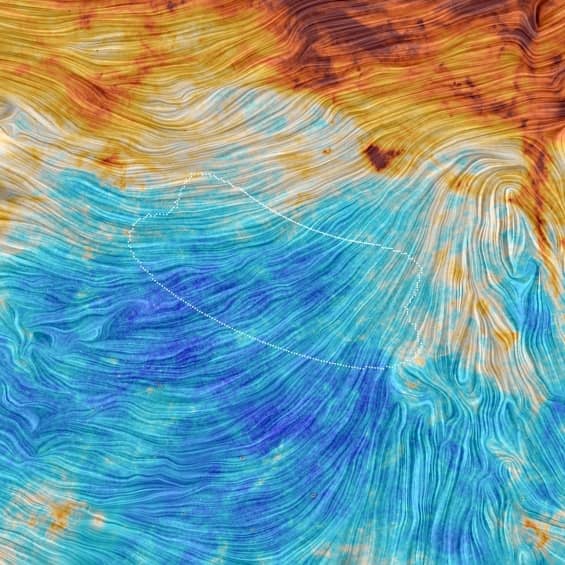 Nearly a year after the claimed detection of gravitational waves caused ripples of excitement around the world, follow-up research has left those conclusions in the dust.

Last March, the research team behind the Antarctic BICEP2 (Background Imaging of Cosmic Extragalactic Polarization) telescope announced the discovery of tell-tale polarization in light from space that appeared to be consistent with gravitational waves.

Such waves are a key prediction of inflation – the idea that the infant universe underwent a period of ultra-rapid expansion immediately following the big bang, causing gravitational wave “ripples” that left an imprint on the earliest light in the universe, the cosmic microwave background (CMB).

Follow-up research released last week, however, indicates that cosmic dust, not echoes of the big bang, may well have caused the BICEP2 signal.

The BICEP2 claim hinged on the interpretation of a curlicue pattern in the polarization of the CMB as being due to ripples in spacetime, called gravitational waves, predicted to have been generated during inflation.

That finding appeared to be dramatic observational evidence in favour of the theory of inflation. However, as with all scientific discoveries, meticulous analysis and confirmation is required.

So when the apparent discovery made international headlines last March, some cosmologists, including Perimeter Institute Director Neil Turok, urged caution about attributing the pattern to gravitational waves.

Now, it appears such caution was warranted: a follow-up analysis done jointly by BICEP2 and Planck satellite researchers indicates that the earlier BICEP2 findings may well be attributable to dust scattered throughout our Milky Way galaxy. Microscopic grains of dust, spinning in the galaxy’s magnetic field, now seem to be the explanation for the curly pattern in the radiation seen by BICEP2.

The BICEP2 team initially interpreted their measurements as implying that around 20 percent of the ripples measured in the CMB were due to inflationary gravitational waves. This claim was, however, in tension with the Planck satellite’s previous measurements, as pointed out in a paper by Perimeter Faculty members Kendrick Smith, Latham Boyle, Turok, and their co-authors.

“Science is a self-correcting process,” said Turok. “An incorrect claim was rather quickly corrected. But what is at stake is something more significant. The most popular theory of the early universe is now being strongly challenged by experiment. It will be exciting to see whether the theory survives or whether it will of necessity have to be replaced by another theory. We are lucky to live in an era when questions about the very beginnings of the universe have become a part of normal science.”