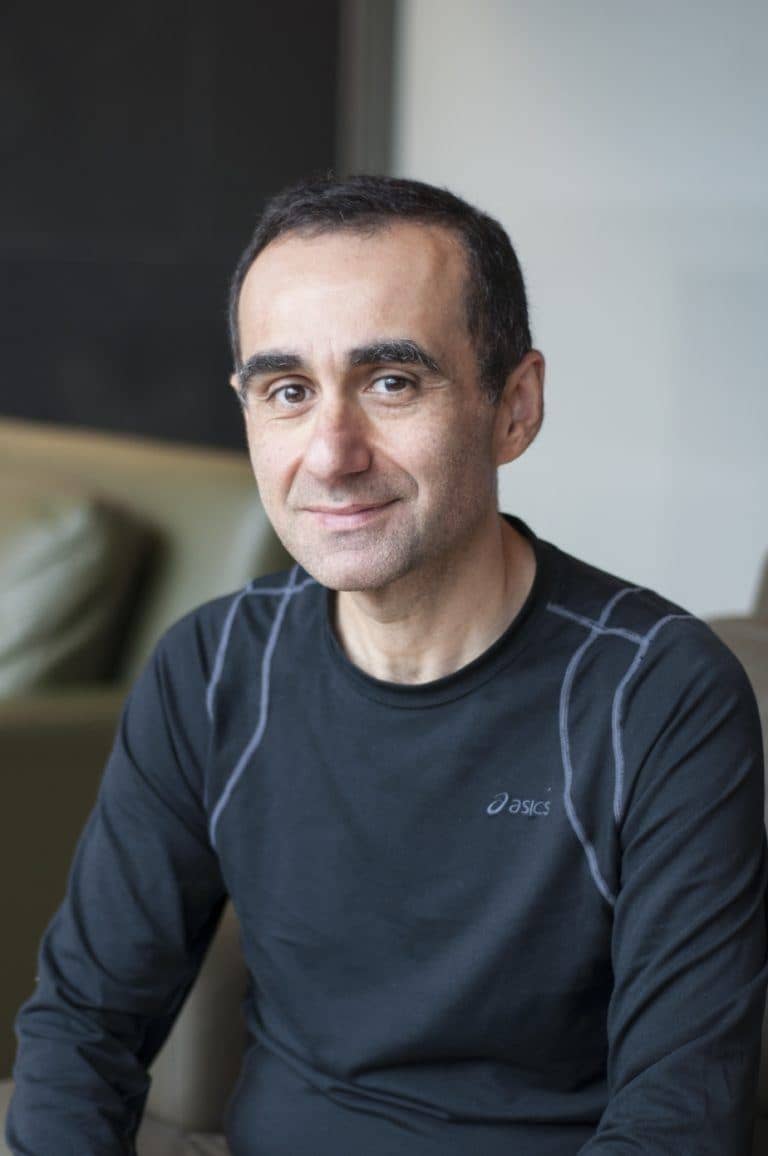 He designs and builds ultra-sensitive detection instruments that allow us to look at nature in fundamentally new ways.

“Any time you have a new tool to study a system, you end up learning new things about that system,” says Budakian, Perimeter Associate Faculty member and Professor at the University of Waterloo.

“Historically, this is how most scientific discoveries are generated, and it’s a process that continues today.”

To see something new, Budakian had to get small — really small. The instrument he uses is as long as a human hair is wide and has the circumference of a virus.

“I got into this field of research as a postdoc at the IBM Almaden Research Center in San Jose. I was working with Dan Rugar [Manager – Nanoscale Studies, IBM Research Division] at the time on a new technique called magnetic resonance force microscopy (MRFM).”

An MRI machine reveals tissues and structures inside the body without having to cut it open by measuring the fundamental unit of magnetism, called spin, in a very clever way.

Your body – all matter, in fact – is made up of electrons, protons, and nuclei. These particles have spins, and therefore generate magnetic fields. Magnetic resonance uses the spin of a given particle as a kind of exquisite clock.

Your body, mostly water, is full of molecules of H2O. Hydrogen atoms have one of the strongest nuclear magnetic moments around and a specific spin frequency, so when an MRI machine imposes a magnetic field of known strength on the entire body it can spot the spins of just the protons in those water molecules. Get enough protons together and you can generate an accurate image of what’s happening inside without ever needing a scalpel.

“MRI is great for something as big as a human body, but only works if you have lots of protons around to construct a signal,” says Budakian.

“The sensitivity of MRFM is billions of times better than an MRI machine. With MRFM you can image things like single molecules, virus particles, and proteins. You can make slice-by-slice images of very tiny things without destroying them, and you can get chemical information by learning what the atoms are inside and how they’re arranged.”

Using the new tool of MRFM, Budakian is investigating fundamental questions about nature.

“This tool has many implications for social and scientific problems. In structural biology, it will let scientists examine a single virus and discover exactly how it’s made, including chemical information, which will be transformative for the discipline,” explains Budakian.

“In condensed matter, where we study the physics of materials and correlated systems, MRFM helps us understand many-body effects – phenomena that come about when many particles interact to give rise to a collective excitation or state-of-matter. Usually, you can only measure what’s called the ‘bulk’ – all the particles together. MRFM lets us make local, incredibly precise measurements at the nanometer scale. This will help us learn more about states-of-matter like superconductivity, where the interesting stuff seems to be happening at the surface.”

For something with a name like magnetic resonance force microscopy, “the instrument itself is surprisingly simple,” says Budakian, bringing up a 3D image on his laptop.

“We just need to detect forces: if we can measure the magnetic field of something, we can know its spin. So, we take a sample, put it on a tiny cantilever, and pass it over what we need to measure using magnetic resonance to encode only the spins we want. The movement of the cantilever gives us the measurement we need. As you can imagine, the difficult part is nanoengineering an instrument small enough, and precise enough, to make these measurements.”

There’s only one way to build a cantilever that small: by not building it at all.

“The most sensitive instruments we use are actually grown,” he explains. “They start with a catalyst particle: a very tiny gold particle on a surface of silicon. We place the catalyst in a furnace with Silane gas, which contains silicon that bonds to the gold at high temperatures. Eventually, you get a tiny rod of silicon that has grown preferentially on the gold – and voila.”

The final cantilever is about 50 nanometers across and 20 microns long.

“That’s our mechanical object. We attach a molecule of what we want to interact with on the very tip of this rod and bring it near the object that generates the magnetic field gradient and resonance, all at a very low temperature. From that, we get our measurements and then our image.”

It’s a feat that demonstrates what happens when discoveries of theoretical condensed matter physics are put to the test in the lab. That kind of blackboard-to-laboratory collaboration is exactly what drew Budakian to Perimeter and Waterloo.

“The people I interact with are varied: I deal with scientists asking fundamental questions and ask them myself, but I also work with engineers who know how to build things,” he says.

“Having Perimeter and the Institute for Quantum Computing (IQC) right next to each other was absolutely a draw for me to come here because our technique is fundamentally a quantum technique.  Having people with technical expertise at IQC is exciting — I can dream about experiments I couldn’t before.

“At Perimeter, where the focus is theoretical, I get access to lots of different ideas. Just yesterday, I was interacting with a group of cosmologists who are dealing with problems whose effects are felt by spin. Perimeter allows for these unexpected avenues, broader applications for our techniques and tools. These aren’t research programs now, just fun and stimulating things to think about, but that’s part of the process.”