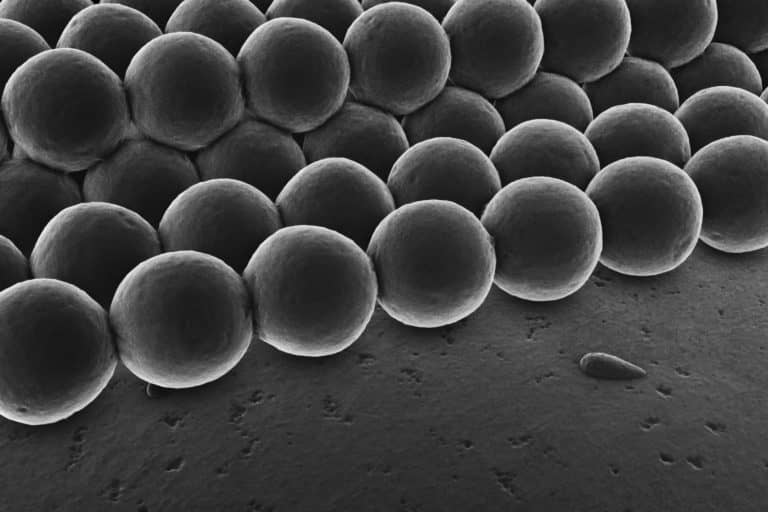 One of the hottest materials in condensed matter research today is graphene.

Graphene had an unlikely start: it began with researchers messing around with pencil marks on paper. Pencil “lead” is actually made of graphite, which is a soft crystal lattice made of nothing but carbon atoms. When pencils deposit that graphite on paper, the lattice is laid down in thin sheets. By pulling that lattice apart into thinner sheets – originally using Scotch tape – researchers discovered that they could make flakes of crystal just one atom thick.

The name for this atom-scale chicken wire is graphene. Those folks with the Scotch tape, Andre Geim and Konstantin Novoselov, won the 2010 Nobel Prize for discovering it. “As a material, it is completely new – not only the thinnest ever but also the strongest,” wrote the Nobel committee. “As a conductor of electricity, it performs as well as copper. As a conductor of heat, it outperforms all other known materials. It is almost completely transparent, yet so dense that not even helium, the smallest gas atom, can pass through it.”

Developing a theoretical model of graphene

Graphene is not just a practical wonder – it’s also a wonderland for theorists. Confined to the two-dimensional surface of the graphene, the electrons behave strangely. All kinds of new phenomena can be seen, and new ideas can be tested. Testing new ideas in graphene is exactly what Perimeter researchers Zlatko Papić and Dmitry (Dima) Abanin set out to do.

“Dima and I started working on graphene a very long time ago,” says Papić. “We first met in 2009 at a conference in Sweden. I was a grad student and Dima was in the first year of his postdoc, I think.”

The two young scientists got to talking about what new physics they might be able to observe in the strange new material when it is exposed to a strong magnetic field.

“We decided we wanted to model the material,” says Papić. They’ve been working on their theoretical model of graphene, on and off, ever since. The two are now both at Perimeter Institute, where Papić is a postdoctoral researcher and Abanin is a faculty member. They are both cross-appointed with the Institute for Quantum Computing (IQC) at the University of Waterloo.

In January 2014, they published a paper in Physical Review Letters presenting new ideas about how to induce a strange but interesting state in graphene – one where it appears as if particles inside it have a fraction of an electron’s charge.

It’s called the fractional quantum Hall effect (FQHE), and it’s head turning. Like the speed of light or Planck’s constant, the charge of the electron is a fixed point in the disorienting quantum universe.

Every system in the universe carries whole multiples of a single electron’s charge. When the FQHE was first discovered in the 1980s, condensed matter physicists quickly worked out that the fractionally charged “particles” inside their semiconductors were actually quasiparticles – that is, emergent collective behaviours of the system that imitate particles.

Graphene is an ideal material in which to study the FQHE. “Because it’s just one atom thick, you have direct access to the surface,” says Papić. “In semiconductors, where FQHE was first observed, the gas of electrons that create this effect are buried deep inside the material. They’re hard to access and manipulate. But with graphene you can imagine manipulating these states much more easily.”

In the January paper, Abanin and Papić reported novel types of FQHE states that could arise in bilayer graphene – that is, in two sheets of graphene laid one on top of another – when it is placed in a strong perpendicular magnetic field. In an earlier work from 2012, they argued that applying an electric field across the surface of bilayer graphene could offer a unique experimental knob to induce transitions between FQHE states. Combining the two effects, they argued, would be an ideal way to look at special FQHE states and the transitions between them.

Two experimental groups – one in Geneva, involving Abanin, and one at Columbia, involving both Abanin and Papić – have since put the electric field + magnetic field method to good use. The paper by the Columbia group is featured on the cover of the July 4 issue of Science, alongside other graphene-related research (including closely related work led by Amir Yacoby of Harvard).

“We often work hand-in-hand with experimentalists,” says Papić. “One of the reasons I like condensed matter is that often even the most sophisticated, cutting-edge theory stands a good chance of being quickly checked with experiment.”

Inside both the magnetic and electric field, the electrical resistance of the graphene demonstrates the strange behaviour characteristic of the FQHE. Instead of resistance that varies in a smooth curve with voltage, resistance jumps suddenly from one level to another, and then plateaus – a kind of staircase of resistance. Each stair step is a different state of matter, defined by the complex quantum tangle of charges, spins, and other properties inside the graphene.

“The number of states is quite rich,” says Papić. “We’re very interested in bilayer graphene because of the number of states we are detecting and because we have these mechanisms – like tuning the electric field – to study how these states are interrelated, and what happens when the material changes from one state to another.”

For the moment, researchers are particularly interested in the stair steps whose “height” is described by a fraction with an even denominator. That’s because the quasiparticles in that state are expected to have an unusual property.

But a sheet of graphene doesn’t have three dimensions – it has two. It’s effectively a tiny two-dimensional universe, and in that universe, new phenomena can occur. For one thing, fermions and bosons can meet halfway – becoming anyons, which can be anywhere in between fermions and bosons. The quasiparticles in these special stair-step states are expected to be anyons.

Qubits are to quantum computers what bits are to ordinary computers: both a basic unit of information and the basic piece of equipment that stores that information. Because of their quantum complexity, qubits are more powerful than ordinary bits and their power grows exponentially as more of them are added. A quantum computer of only a hundred qubits can tackle certain problems beyond the reach of even the best non-quantum supercomputers. Or, it could, if someone could find a way to build stable qubits.

The drive to make qubits is part of the reason why graphene is a hot research area in general, and why even-denominator FQHE states – with their special anyons – are sought after in particular.

“A state with some number of these anyons can be used to represent a qubit,” says Papić. “Our theory says they should be there and the experiments seem to bear that out – certainly the even-denominator FQHE states seem to be there, at least according to the Geneva experiments.”

That’s still a step away from experimental proof that those even-denominator stair-step states actually contain non-Abelian anyons. More work remains, but Papić is optimistic: “It might be easier to prove in graphene than it would be in semiconductors. Everything is happening right at the surface.”

It’s still early, but it looks as if bilayer graphene may be the magic material that allows this kind of qubit to be built. That would be a major mark on the unlikely line between pencil lead and quantum computers.