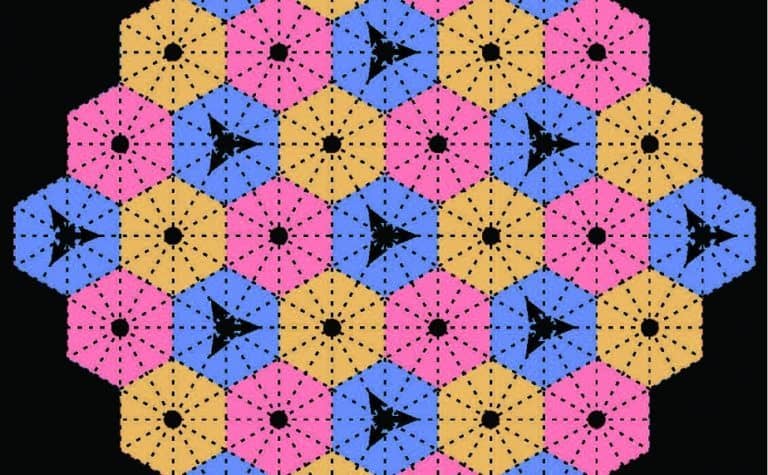 A crystal is a crystal, right? Diamond, quartz, graphene, and the like are lattices made up of a symmetric, repeating arrangement of atoms. Any way you look at it, a crystal’s innards are arranged in a predictable pattern.

But what if there was another type of crystal, one that exhibited its crystalline nature not in it is structure, but in its movements?

Such a crystal would only reveal its symmetry through the motion of its particles. If you were to take a photograph of its internal workings, it would look asymmetrical. But if you were to watch a movie of it, a choreographed dance of its particles would emerge over time. It would have a dynamic sort of symmetry.

The idea for this new type of crystal came to Perimeter Institute Faculty member and cosmologist Latham Boyle when he was puzzling over ways to detect gravitational waves.

In a recent paper (UPDATE: this paper was published in Physical Review Letters in January 2016, and is also available on the arXiv), Boyle and co-authors explain the concept. He posits that these “dynamical crystals” might already exist in nature, or could be engineered in a lab. Either way, he suspects they are bound to be good for something, so the paper also describes a general method to construct such crystals mathematically, as well as an experimental way to find them and figure out their structure.

This is admittedly unusual territory for a cosmologist, but Boyle says he got there honestly, via a circuitous route that started in the depths of the universe.

Such an experiment could determine something about where a gravitational wave had come from, and its polarization state. But Boyle suspected that adding a fourth satellite – and choosing an appropriate four-satellite orbit – would glean much richer and more complete information.

It was an interesting idea, but one without much chance of near-term impact. Still, Boyle was curious, so he did what physicists do: he boiled the idea down to its simplest case and tried to work out a symmetrical four-satellite orbit.

He couldn’t do it. There was just no way to make a symmetrical four-satellite system. But then, over Christmas 2012, he started fiddling with the idea again, this time from a new perspective.

Instead of looking at dynamic objects, like orbiting satellites, and trying to force them to have a static sort of symmetry, why not find a symmetry that suits them? Why not look for dynamic symmetry?

“It turns out there’s this really, really symmetric orbit for four satellites,” he says, drawing diagrams on the wall-sized chalkboard in his office at Perimeter Institute. “The surprising thing is that it’s even more symmetrical than the regular tetrahedron, which is the first of the Platonic solids and is the most symmetrical static arrangement of four points.”

If you reflect an ordinary (static) crystal through a certain plane, or rotate it by a certain amount, it still looks the same. But the symmetries of the four-satellite orbit mix space and time. To go back to the movie analogy, after a certain rotation, it might look as though the film has been fast-forwarded by a certain amount.

Excited by the idea, Boyle got chatting to Kendrick Smith, a cosmologist who was visiting Perimeter at the time and has since joined the faculty.

“We both are cosmologists, so it was natural for us to be talking. But this is not really cosmology and I was just sort of telling him about it because I was excited about it,” Boyle says.

But Boyle wasn’t sure how to proceed. Smith listened, and then finished his visit to Perimeter. A week later, an email arrived in Boyle’s inbox. Smith had developed an ingenious way to find all of the analogs of the symmetric satellite configurations.

“With him, it wasn’t just excitement,” Boyle says. “He’s also very gifted and had solved the problem straight up.”

The more general concept of ‘choreographic order’ might be of interest in a range of contexts: from designing satellite systems in outer space, to understanding the microscopic arrangement of certain many-body systems in the lab, and even in pure mathematics, where Boyle says lattices and crystals are “ubiquitous.”

Choreographic crystals might even exist in nature. We could have just missed them because they would modify Bragg’s diffraction laws (which stipulate that a beam diffracted through a crystal has the same frequency before and after diffraction) in a subtle way.

In particular, Boyle and Smith have shown that if a choreographic crystal were subjected to a diffraction experiment, both the frequencies and positions of the diffraction peaks are shifted and split in a specific way. By measuring these shifts and splittings, one could infer not just the spatial arrangement of the atoms, but how they are moving as well.

“That’s the key experimental prediction. There could be this other type of crystal out there, which we think people might have missed because it’s much less intuitive,” Boyle says.

“I don’t know if these things will be out there in nature or not, but it makes sense to look for them. There is this very clear-cut signal to look for.”

A glimpse at the equation for the four-satellite orbit.

How Canadians cracked the secret to detecting fast radio bursts and turned a trickle of discoveries into a deluge.