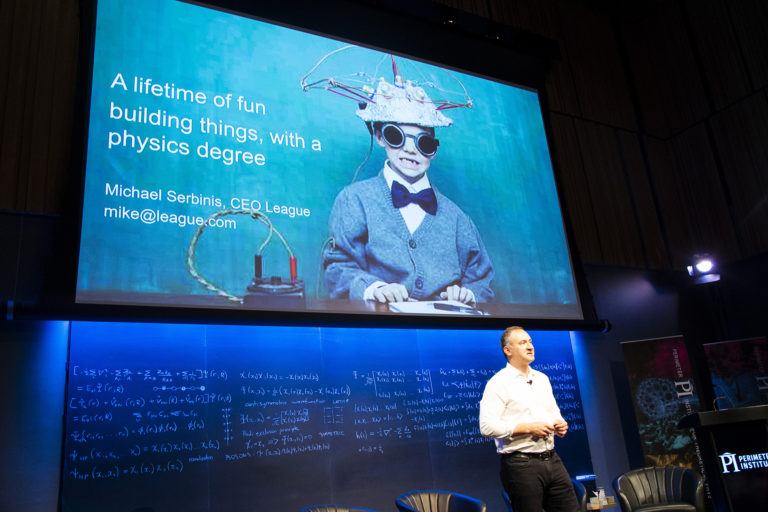 Physics is not a one-way door to academia. It can be a launch pad to an infinite range of careers that are grittier, quirkier, and much more varied than most people – and most physicists – realize.

Six years after graduating from Perimeter Scholars International (PSI), Brigette Riley is a Propulsion Development Engineer at SpaceX while also completing her PhD.

Imogen Wright, the valedictorian of PSI’s inaugural class, is the co-founder of Hyrax Biosciences, a bioinformatics start-up that develops cost-effective ways to do complex genetic testing.

Jorge Escobedo, a PhD student at Perimeter from 2009 to 2012, is now the Chief Technology Officer of Canopy Labs, a predictive analytics software company he co-founded.

They are just a few of the Perimeter alumni who have chosen careers outside academia, and each recently returned to the Institute to speak about their experiences as part of Perimeter’s inaugural “Career Trajectories Day.”

More than 150 graduate students and postdoctoral researchers from Perimeter and eight Ontario universities attended, keen to hear talks and panel discussions that addressed an oft-neglected question: What can you do with a physics degree besides becoming a professor of physics?

“Young theoretical physicists completely underestimate what their opportunities are,” noted Perimeter’s Managing Director and Chief Operating Officer, Michael Duschenes, as he explained the impetus for the conference during his opening remarks. “Critical thinking and problem-solving skills are extremely high on the wish list of employers and, of course, anyone who has a background in physics has those in spades.”

Keynote speaker Michael Serbinis stands as living proof. Best known as the founder of Kobo, a digital reading company, Serbinis is a charismatic serial entrepreneur who parlayed his natural curiosity and an engineering physics degree from Queen’s University to success on varied fronts. He regaled attendees with stories of working on a project for NASA as a high school student, and leaving a $100,000-a-year job at Microsoft to sleep on a couch in Silicon Valley, where he helped build a search engine that ultimately sold for $300 million.

Serbinis is now the founder of a health care start-up called League, an angel investor, and a member of several boards, including Perimeter’s. He credited physics for much of his success. “Physics is a pretty awesome basis for solving all kinds of problems in business,” he noted. “People that have a background in physics and engineering – they just kind of go to first principles, versus fear or confusion.”

Serbinis’ story is by no means an anomaly. Jozef Straus, employing a healthy dose of self-deprecation, told attendees of his career arc from a PhD in electron tunneling studies to a career manufacturing products for optical communication, advising them to keep an open mind.

The day’s other keynote speaker, Imogen Wright, has also used her physics background in an entrepreneurial fashion. She explained how she came to PSI from the poorest province in South Africa, feeling overwhelmed and underprepared, and emerged with a sense of mastery. The company she co-founded, Hyrax Biosciences, is on track to help 250,000 people in Sub-Saharan Africa access drug resistance testing that can greatly extend lives.

Over and over, attendees heard about ways they could have an impact on the world outside of physics – from science communication and political campaigns to finance and the world of start-ups. Panellists advised the audience to reach out to their networks, to remember that physics is refreshingly impressive to non-physicists, and to understand that there’s life outside academia.

That message resonated with Dylan Podkowka, a master’s student in gravitational theory at the University of Guelph. “My perspective is a bit more open now to doing anything that is interesting, rather than looking for one specific job,” he said.

“It’s been encouraging for me to hear all these different perspectives,” added Melanie Demers, a master’s student in observational astronomy at McMaster University. “Having the opportunity to connect with people here in this setting is a rare one. It’s not something I’ve experienced so far in my degree.”