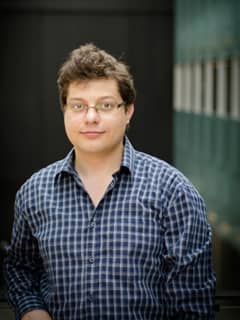 Senior Postdoctoral Fellow Razvan Gurau is motivated by one of the most basic and pressing questions in modern physics: what is the fundamental nature of spacetime? Quantum mechanics suggests that at some level space could be granular – that is, made of discrete pieces that cannot be broken apart. Field theory, meanwhile, teaches us that at some level space should fluctuate randomly. Can one put these two ideas together into a coherent framework describing randomly fluctuating discrete spaces? To do so would be a major step toward the Holy Grail of today’s physics: unifying quantum field theory and general relativity into a theory of quantum gravity. Developing a theory of quantum gravity has proved to be an extraordinarily difficult problem, one that has stumped physicists for 80 years. About 40 years ago, researchers began to make progress on a simplified version of the problem: imagining space to be just two-dimensional and asking how gravity would look. A highly successful theory of random two-dimensional surfaces has been extensively developed. But, of course, we are not really living in Edwin Abbott’s Flatland. Our universe appears to be four-dimensional – that is, it seems to have three spatial directions and one dimension in time. Since the 1990s, many attempts have been made to build on the success of the theory of two-dimensional random spaces by constructing an analogous theory of random three-dimensional spaces. All proved fruitless. Then, in 2010, Gurau published a series of papers, which showed how the two-dimensional models could be generalized to produce models with three dimensions or more. In other words, they showed the path from a Flatland universe to the real one. This work quickly attracted the attention of other researchers in quantum gravity, both at Perimeter and at other leading centres around the world. The last year and a half has seen remarkable and rapid developments in quantum gravity. For his seminal contributions in opening this new research direction, Gurau has been awarded the Hermann Weyl Prize for 2012. This prize, which is named after renowned German mathematical physicist Hermann Weyl, is awarded every two years. This is the second time a Perimeter researcher has won the award, after Senior Postdoctoral Fellow Giulio Chiribella received the honour in 2010. Gurau will receive his prize in a ceremony at the International Colloquium on Group Theoretical Methods in Physics, which will be held in China later this summer.