The poetry of logical ideas

To understand and visualize the new and elegant theory of general relativity, the physicists of the day needed a mathematical poet.

Her name was Emmy Noether.

Noether was a German mathematician who played with symmetry. Just as a poem has symmetrical qualities that make it lyrical to the ear, nature has internal symmetries: attributes that remain unchanged when a system goes through some other transformation.

In a tribute to Noether published in the New York Times shortly after her death, Albert Einstein wrote “pure mathematics is, in its way, the poetry of logical ideas,” and he described Noether as a master of the craft. She was “the most significant creative mathematical genius thus far produced since the higher education of women began,” he wrote.

Einstein’s theory of general relativity, describing gravity emerging from the warping of spacetime, generated excitement when it was hot off the press in 1915. Yet few are aware of his compatriot, who did groundbreaking mathematical work at around the same time, and whose influence resonates through every branch of modern physics today.

Amalie Emmy Noether was born in 1882 to a Jewish family in Erlangen, Germany, where her father, Max Noether, was a mathematics professor. She excelled at math-related puzzles even as a child, but she had to buck social convention to pursue mathematics at a time when a woman was expected to get married, have children, and perhaps, if she were to pursue a career, become a teacher in a girls’ school.

So buck them, she did. The University of Erlangen did not allow women to enroll, so in 1900 she opted to become one of two women auditing classes alongside 984 male students. She then went to the University of Göttingen, where she audited lectures by famed astronomer Karl Schwarzschild and mathematicians Hermann Minkowski, Otto Blumenthal, Felix Klein, and David Hilbert.

In 1904, Erlangen began enrolling women. Noether returned to her hometown and, in 1907, received her PhD in the theory of invariants, a class of mathematical objects that remain unchanged when certain types of transformations are applied to them (such as the ratio of the circumference of a circle to its diameter staying the same no matter how big or small you make the circle).

Indeed, she became a “great calculator” of invariants, mathematician Peter Olver said during his “Convergence” lecture at Perimeter in June. Long before the advent of computational tools like Mathematica, Noether calculated all 331 invariants of
ternary biquadratic forms for her thesis. (Noether herself would later describe that work as “manure,” he added.)

“She just ignored social convention and did what she loved,” says Ruth Gregory, a professor of cosmology and relativity at Durham University and Visiting Fellow at Perimeter Institute.

PhD in hand, but with no career path available to her, Noether worked at the Mathematical Institute of Erlangen, without pay or title, from 1908 to 1915. In 1915, Noether was at the University of Göttingen, then the world’s leading centre for mathematics, where she collaborated with luminaries who had earlier been her lecturers. She still had no paid position.

In June of that year, Albert Einstein presented a lecture at Göttingen outlining the idea of general relativity. He had not yet worked out its mathematical laws, but the fledgling theory set the university alight.

Hilbert, in particular, was interested in working out the equations for Einstein’s outline – perhaps even beating him to the formulation of relativity. But Hilbert quickly hit a snag: in his approach to general relativity, the conservation of energy law seemed to be violated. Knowing Noether’s genius, Hilbert turned to her for help. What stemmed from that request was groundbreaking.

This was an incredible insight. Here were two things that were seemingly unrelated – time and energy – but Noether was able to connect them using mathematics.

“It is hard to overestimate the importance of Noether’s work and insights in modern physics,” Gregory says. “The most important examples we end up using have symmetry in them. So I would regard Noether as enriching our understanding of relativity.”

Today, Noether’s theorems are used at a very fundamental level. They provide a way for physicists to unveil hidden connections in nature, and have guided every branch of modern physics from quantum field theory, to the understanding of black holes, to the prediction of new particles including the Z and Higgs bosons.

“We use the ideas of symmetries corresponding to conservation laws pretty much all the time, but we don’t immediately think ‘Noether!’” Gregory says. 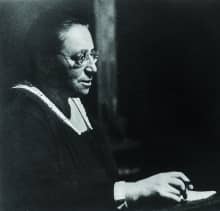 Following Noether’s astounding breakthrough, Hilbert tried to secure a paid position for her at the University of Göttingen. The best he could do was to bring Noether in as an unpaid assistant, with her lectures billed under Hilbert’s name. She didn’t get an official position until 1919, after Einstein and others lobbied on her behalf, and it was only in 1922 that she began receiving a small income for her work.

Yet she was not prone to bitterness. She was at her happiest doing mathematics, her life-long love. Historical accounts paint a picture of a woman who would get so animated talking about mathematics, she didn’t notice her blouse becoming untucked or wisps of her hair flying here and there in the classroom. She was totally unconcerned with looks or worldly possessions.

As Hitler rose to power in 1933, the dark clouds gathering in the world outside impinged on her life of pure mathematical ideas. Anti-Semitism in Germany intensified and it became dangerous to be a Jewish professor. Noether was one of the first teachers to be dismissed, because she was a Jewish pacifist.

Yet she worried more about others than for herself. Hermann Weyl, another German mathematician and a theoretical physicist, later wrote that “her courage, her frankness, her unconcern about her own fate, her conciliatory spirit, was, in the midst of all the hatred and meanness, despair and sorrow surrounding us, a moral solace.”

Noether, like Einstein, went to the United States, where she had secured a position at Bryn Mawr College in Pennsylvania. According to a memorial address by Weyl, this was a happy period of her life and she felt deeply appreciated as never before.

Just 18 months later, on April 14, 1935, she died of complications following surgery to remove an ovarian cyst. She was 53.

Unlike Einstein, Emmy Noether never became a household name, perhaps because she was a mathematician rather than a physicist. Today, Noether is usually only encountered by students tackling her theorems in university math classes.

“I think, relative to the importance of her contribution, she is less of a ‘star.’ Why? Maybe because she proved a theorem, and physicists are less into theorems,” Gregory says.

Yet Noether not only changed the course of modern physics, she also opened the doors to physics and mathematics for women around the world.

“By being excellent, genuinely excellent, she showed that you did not have to be a man to prove a good theorem or to start a new area of mathematics. It was some time before things began to open up, but she showed that it could be done,” Gregory said.

“She changed the world she lived in and she changed it for the better and for all of us.”

The curious case of Noether’s theorems

When mathematician Yvette Kosmann-Schwarzbach set out to write about Emmy Noether’s now ubiquitous theorems, she was surprised to learn that Noether’s work did not always receive the recognition it deserved.