Even though it is over 100 years old, Albert Einstein’s theory of general relativity is still a formidable prizefighter.

The theory, which successfully describes gravity as a consequence of the curvature of spacetime, has withstood all the experimental tests that physicists have been able to throw at it over the decades. 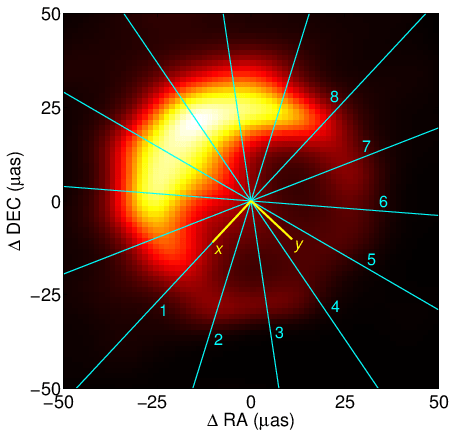 So now, to have any hope of challenging general relativity, they need to bring in a heavyweight. Enter the closest challenger: the smallish but still formidable 4.5-million-solar-mass black hole at the centre of the Milky Way galaxy.

The challenge will be assisted by the Event Horizon Telescope (EHT), a radio telescope array as large as the Earth, being configured to take precise images of the silhouette (or the shadow) of that black hole, known as Sagittarius A*.

Tim Johannsen, a postdoctoral fellow at Perimeter Institute and the University of Waterloo, who works with Avery Broderick, an Associate Faculty member at Perimeter Institute jointly appointed at Waterloo, has led a group of researchers in calculating the measurements that will be used to determine whether general relativity really does stand up in the strong gravity regime of that black hole.

Their paper was recently published in Physical Review Letters, along with an accessible synopsis of the work.

When the images from the black hole come in and the measurements outlined in the recent paper are actually taken, it will be the first truly broad test of general relativity in the strong gravity regime.

“That is very exciting and we expect to be able to do that within the next few years,” Johannsen says.

Black holes are regions of spacetime where gravity is so strong that not even light can escape once it has passed the threshold of no return − the event horizon. As the name implies, they are dark.

But owing to its immense gravity, the black hole pulls in vast quantities of dust and gas from surrounding stars. The dust and gas accretes into a hot swirling plasma disk that illuminates the silhouette of the black hole. The EHT will be able to capture this accretion disk, in images that will be historic firsts.

A lot of physics will be done with the data gleaned from those images, but putting general relativity to the test is perhaps the most exciting challenge.

General relativity has been fantastically successful. In every experiment that has been done to test how the sun and stars in our cosmos affect spacetime and exert gravitational pull on other objects, its predictions have held up.

But the question is whether the theory will continue to hold up in a strong gravity environment, such as the surroundings of a black hole.

Black holes are so massive and compact that the spacetime-warping effects predicted by general relativity would be more evident than around the sun or other stars. They are “orders of magnitude” different as gravitational environments go, Broderick says.

“That means that this is terra incognita and we don’t know what we are going to find,” Broderick says. The EHT provides “an opportunity to begin probing in a critical way the non-linear nature of general relativity in the strong gravity regime.”

This is important to physicists because, even though general relativity has been enormously successful in explaining the cosmos that we can see, there are a number of difficulties with it. “It is not clear, for example, exactly how it should be combined with the quantum theory that we have, and, in fact, it is very difficult to reconcile the two in a grand unification scheme,” Johannsen says.

Moreover, there is the problem of the mysterious “dark energy” driving the accelerated expansion of spacetime, as well as the conundrum about the nature of “dark matter,” unseen mass theorized as an explanation for observed galaxy rotation rates that prevent galaxy clusters from flying apart. Physicists are hoping for some insights about general relativity in the strong gravity regime to make sense of these mysteries.

Johannsen’s team has developed a way of checking how much the gravitational environment of this black hole might deviate from the theory of general relativity and other gravity theories.

The paper sets constraints on the parameters of the size of the shadow to fit with general relativity. Other gravity models also propose modifications to the theory of general relativity, such as the Modified Gravity Theory (MOG) and the Randall-Sundrum-type braneworld model (RS2). The paper sets the constraints for the black hole to fit with these gravity models as well.

“We have made the first realistic estimate of the high precision with which the EHT can detect the size of the shadow,” Johannsen says. “We show that such a measurement can be a precise test of general relativity.”

A nice bonus from this work is that researchers will also get much more precise measurements of the mass of the black hole and its distance. “Sharpening the precision is great because that will enable us to get even more precise constraints on deviations from general relativity,” Johannsen adds.

There are already good measurements of how far away Sagittarius A* is and how massive it is, based on other experiments that have looked at the motion of stars as they orbit the black hole, as well as the measurements of masers (like lasers, but with microwaves) throughout the Milky Way, Johannsen explains. “People have been doing this for about 20 years.”

This can be used to figure out what it should look like. But once the images from the EHT are available, it will be possible to check: “Do we get what we expect? Or do we get something else?” Johannsen says.

Getting the measurements is really a matter of drawing a series of lines from the centre of the black hole image to the edge of its shadow. On the image, it looks like a pie shape with slices. Measuring the lines of each slice and calculating an average “gives us the angular radius of the shadow and then we know how big it is,” Johannsen says.

From the measurements of the size of the shadow, it is possible to see how closely the gravity in the black hole environment matches the predictions of general relativity and of other theories of gravity.

“If general relativity is not correct, there can be significant change in the size. The shadow can also become asymmetric so that it is no longer circular, but egg-shaped, for example,” Johannsen says.

Getting to the point of making these measurements will take a couple more years because at least seven or eight of the telescopes in the EHT array must be coordinated to get the data at the same time in a massive worldwide collaboration.

The amount of raw data that has to be gathered to get the images is so enormous, it can’t even be transmitted over the internet.

“These are humongous data sets. So they literally have to save all this data on hard drives and put them in a box and ship them,” Johannsen says.

The hard drives get shipped to the MIT Haystack Observatory, which is the headquarters for the EHT. From there, the raw data is analyzed and the images are produced.

After the images are produced, Johannsen gets to use his measurement technique to find out if general relativity is correct for the strong gravity environment around this black hole.

This isn’t the only test of general relativity in the strong gravity regime in the works. There are other sophisticated experiments to detect, for example, the gravitational waves that are predicted by general relativity. But the prime experimental candidate to confirm the existence of gravitational waves would be the Evolved Laser Interferometer Space Antenna (eLISA), a space-based telescope with an estimated launch date of 2034. The EHT will produce images in the next few years.

If it turns out that the measurements yield what was expected and general relativity holds up, that would be interesting, “because Einstein had this theory 100 years ago, and then we will know that it is true,” Johannsen says.

But if the challenger should prevail, and strong gravity does strike a blow to the theory of general relativity, “that would be big,” he adds.