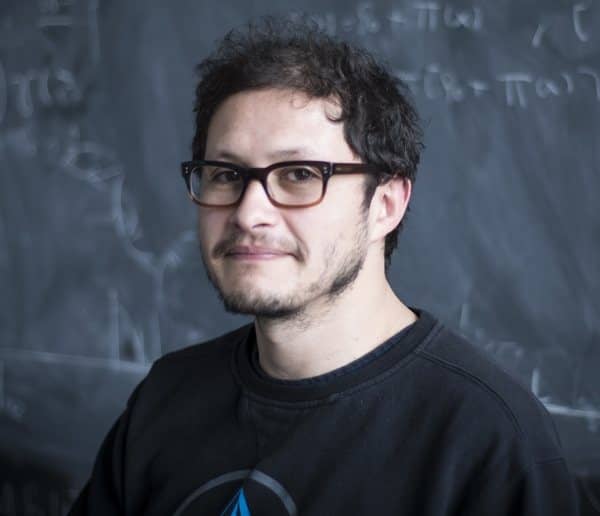 Carrasquilla is part of a team based at Penn State, which has found a previously unobserved phenomenon called quantum distillation, which occurs at very low temperatures. They pioneered new techniques that allowed them to observe this quantum distillation in progress, and used it to create a state of matter they named the “doublon sea.” The work was recently published in Nature Physics.

The frontier of cold

To understand what physicists like Carrasquilla are up to when they work at extremely low temperatures, it’s important to remember that heat is technically disorder, or entropy. Normally, one thinks of this disorder as coming from the random jiggle of atoms, but any kind of disorder counts as heat.

In this work, the researchers began by cooling a gas of atoms to very low temperatures – so low that the atoms are sitting essentially1 still. What emerged was a Bose-Einstein condensate – that is, an exotic state of matter where all the atoms are at their lowest possible energies.

One might think that such a state is as cold as cold can get; after all, the disorder from movement has been (almost) erased. But the atoms are still distributed randomly, which is another kind of disorder. To erase that, the researchers drop a lattice of lasers across the cold gas, trapping atoms in a crystal of light.2 The lattices force the atoms into an orderly – that is, cold – distribution.

“This is already one of the coldest temperatures in the known universe,” says Carrasquilla. To get some perspective on that, the inside of the system is billions of times colder than empty space.

But there is still one more source of disorder: the varying numbers of atoms in each lattice space. Each space is generally occupied by one, two, or very occasionally three atoms – or, in the parlance of condensed matter, singlons, doublons, and triplons.

A quantum distillation and a doublon sea

Here is where the work hits novel territory. To create more order out of the jumble of singlons and doublons, the researchers used a quantum take on an old technology: distillation.

Their two-fold goal was to learn to observe the never-before-seen phenomenon of quantum distillation, and to use it to create what they dubbed a “doublon sea.”

Why doublons? Triplons are rare to start with. Singlons can evaporate – distill – off the edge of the system. Doublons, though, stay stuck in the lattice.

“Doublons are good because they are very sticky,” says Carrasquilla. “It becomes very hard to pull them apart.” It’s almost as if their quantum “boiling point” is too high, such that the singlons can be evaporated away while the doublons remain.

The researchers succeeded in the first – and arguably more important – goal of observing quantum distillation. As for producing a doublon sea …

“In the end we did observe that there was a prevalence of doublons. It’s not perfect – we do trap some singlons too,” says Carrasquilla. “But we believe if we try it with a different kind of atom, we will see doublons almost exclusively – which would be even lower entropy, even colder.”

The real significance of this work is as a proof of principle: the researchers have demonstrated that this new process of quantum distillation works, and has the potential to create extremely low-entropy states.

This is, obviously, highly experimental research, involving actual cold atoms in a lab at Penn State. But it’s also a good demonstration of the way theorists and experimentalists work in tandem in fields like quantum materials.

This idea of quantum distillation was initially proposed theoretically. The researchers built an experiment to test the possibility, but they needed a theorist – Carrasquilla – to build a numerical simulation of the system. The simulation predicts what the system should do, and what experimentalists should see.

“The idea was to perform simulations which are as close to the experiment as possible,” says Carrasquilla. “The assumptions we made were simple, but the simulation itself quickly became very complex – a huge simulation of thousands of atoms, requiring large computer clusters. It wasn’t easy, and it is so exciting to see it unfold in the lab as well as in the computer.”

This system is not simply extremely cold, but also physically interesting and potentially useful. That’s because cold is quantum. Heat is like a noise that obscures the music of quantum mechanics. Turn down the volume of that noise and you can hear the quantum waves.

At very low temperatures, atoms seem to lose their individual identities altogether and become governed by a single quantum wave function. It’s like separate ponds merging into one sea. The ultracold system becomes a tool for exploring the fundamental laws of nature.

“That’s why this is such a big deal,” says Carrasquilla. “It’s not about getting colder. It’s about learning something new.”

And something practical. If scientists can learn to produce and manipulate quantum materials, they may be able to harness their power for a coming wave of quantum technologies. This research is a step in that direction.

“The experimentalists have amazing control of the microscopics of the system,” says Carrasquilla. “They can tune the interactions between constituent particles. They can make them evolve in time in a very controlled way. They can tune the parameters that define the system in an unprecedented way.

1 Quantum mechanics never allows anything to be completely still, but the atoms here have reached their minimum allowable energy.
2 The idea of using lasers for cooling may be a bit counterintuitive, but it’s actually one of the best established ways of reaching very low temperatures. Read more via PhysicsCentral.

Using game theory to tell if a quantum memory is legit

Quantum computing will rely on having a working quantum memory, but how can you verify if that memory really is quantum? Three physicists propose how resource theory and game theory could do just that.