Stephen Hawking was a global science superstar. For physicists at Perimeter Institute, he was also a colleague, mentor, and friend.

Ray Laflamme was a graduate student under Stephen Hawking at Cambridge when he was tasked with proving a theory of Hawking’s. The problem was, the theory turned out to be wrong.

Stephen, although being well known and having an incredible reputation, with many people looking up to him, was a scientist. And science is very democratic. You discuss ideas, and ideas can be right or wrong. The math in theoretical physics tells you what is right and what is wrong. So I slowly, painstakingly, went through the math and showed that the original idea could not work. Fortunately, there was a colleague, Don Page, who had a very similar result to mine. We slowly convinced Stephen, and when he learned that he had made a mistake, he turned around and said, “You guys are right.” He was incredibly gracious. I heard that he wrote letters of recommendation for me saying, “This guy has proved me wrong.”

PSI Fellow and cosmologist Tibra Ali was a graduate student at Cambridge when he came across a rare find. 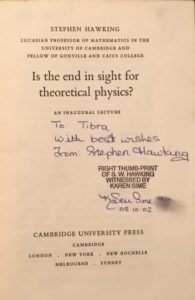 I was a graduate student at Cambridge when I came upon Stephen Hawking’s, “Is the end in sight for theoretical physics?”, a bound version of the inaugural lecture he gave as the Lucasian Professor at Cambridge. It was about 10 pounds or so – way too expensive for my poor wallet – but I bought it anyway and kept it carefully packed away with my stuff. He was the head of my research group and we got used to seeing him every day. Often at  department parties, he would get bored of talking to the bigwigs and just come and hang out with the students. Right before I graduated, I finally got up the courage to go and thank him during a party, and ask if he would autograph the book. In a day or two, I had his autograph on what would become my most prized possession. His secretary had also inserted a photo of him. I love that photo with his impish smile – and a copy of Marilyn Monroe’s biography tucked into his chair.

Imogen Wright was a PSI master’s student when Stephen Hawking paid them a visit.

My mother doesn’t exactly understand what I studied at Perimeter, but she has a massive photo of me chatting to Professor Hawking at my graduation on her wall, and I think that makes her prouder than anything else I’ve ever done.

Eugenio Bianchi was a Perimeter postdoctoral researcher when he used loop quantum gravity to re-derive the Bekenstein-Hawking formula for the entropy of black holes. Then Hawking came to visit.

I was in the Bistro having a coffee and Lee Smolin introduced me to Stephen Hawking. Stephen wanted to hear from me about this recent calculation of black hole entropy. I said I was absolutely happy to do that when they were free. They said, “Okay, in 15 minutes.”

I didn’t have time to freak out or over-prepare. I just had 15 minutes to think exactly what I would condense and explain. The first three questions [from Hawking] were very short: “Are previous calculations wrong?”, “Is the area ensemble wrong?”, and then “Which degrees of freedom?” They were precise questions, the kind you would love to get
when you give a seminar: questions that would either kill the argument or make it stronger. Then we went on for three hours discussing, and after three hours they said: “Okay, we go on tomorrow morning.” I was absolutely blown away by that.

When I met him that first time, I had the highest opinion one could have of a scientist. Meeting him and having questions directly from him on what I was doing – that’s something I couldn’t top. Many of his questions are still driving my research today.

Holly Hatch was Perimeter’s Conference Coordinator during Hawking’s first Perimeter visit in the summer of 2010, when she was asked to coordinate a day trip to Niagara Falls. It ended up being the first of many memorable interactions.

I first met Stephen in his office at PI, and I quickly realized that he was just a regular person – a parent and a grandparent. His days were full of complex science, but he knew that weekends were for having fun.

The Niagara Falls trip was memorable, particularly getting soaked on the Maid of the Mist while hoping my makeshift poncho-wrap would keep his computer – his main communication system – working. I got to know Stephen and his carers over the next six weeks, and they even watched the Canada Day fireworks from the backyard of my townhouse in UW grad student housing – the only place that nobody would find Stephen!

The most memorable outing we had, though, was to the African Lion Safari in nearby Cambridge. We were in a specialized rental van and I warned the group that we likely couldn’t take it through the infamous monkey section (because they scratch the paint), but they kept insisting. I still remember our van, covered in monkeys, as Stephen’s carers kept rolling down the windows to try to feed them bananas – all while an enormous male lion sunned himself a few feet from the van. They were having the time of their lives, but I was sure that I would be fired as soon as we got home. Instead, I was called into Stephen’s office the next week and asked to plan a return trip so he could bring his visiting grandchildren. 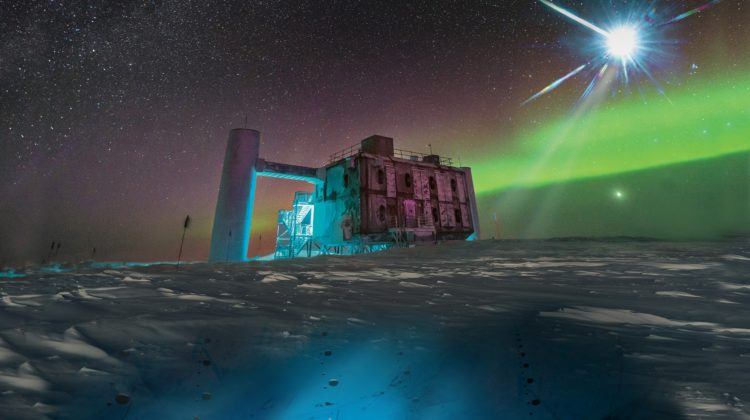 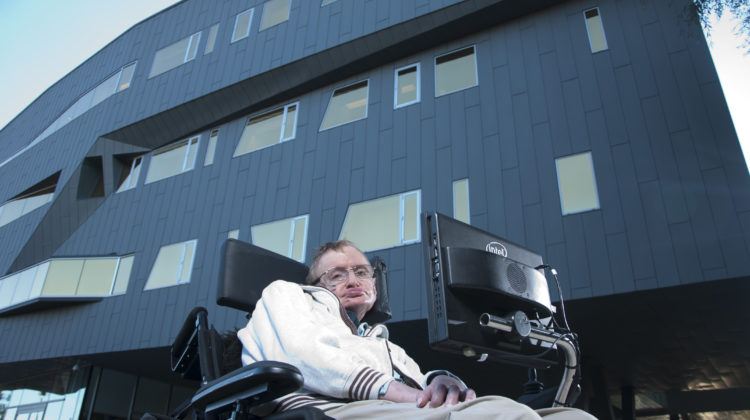 Cosmologist Neil Turok reflects on the life, work, and unquenchable curiosity of his friend and colleague, Stephen Hawking. 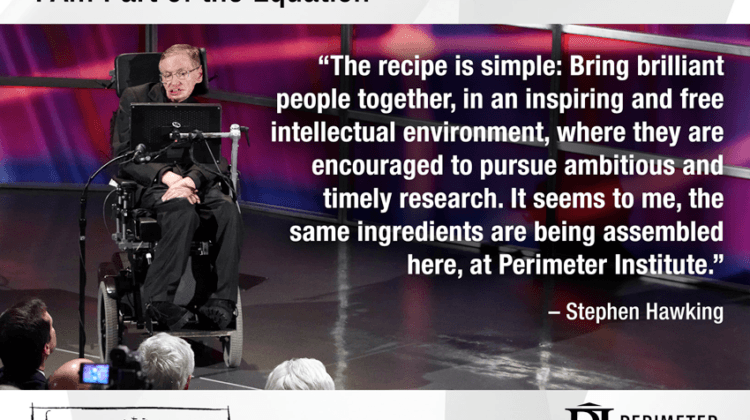 I am part of the equation

Great science is for everyone. Meet some of the people who are part of the equation at Perimeter.