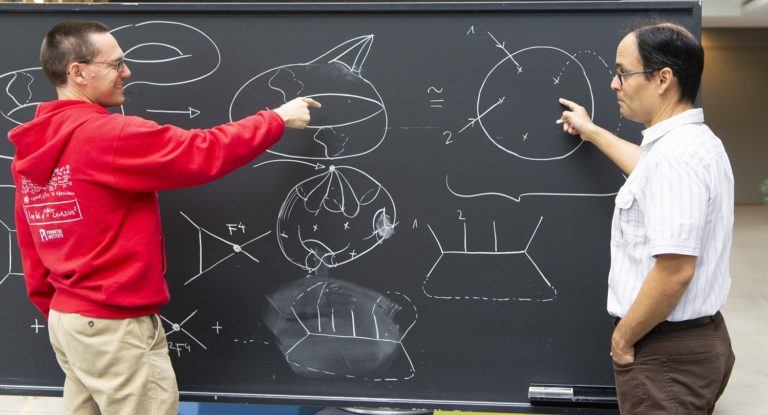 Cracking the toughest problems in physics is a deeply collaborative endeavour and it’s not uncommon for researchers to travel to other institutions to work closely with their colleagues abroad. While most visits last for days or weeks, Perimeter also allows researchers to explore what kind of progress can be made during longer stays. Faculty member Freddy Cachazo and his collaborator Oliver Schlotterer were excited to take advantage of this during a wide-ranging, year-long collaboration beginning in October 2017.

Schlotterer, a postdoctoral fellow at the Max Planck Institute for Gravitational Physics in Potsdam, Germany, and Cachazo, who holds the Gluskin Sheff Freeman Dyson Chair at Perimeter, work on “scattering amplitudes” – mathematical objects that yield theoretical predictions for the subatomic shrapnel that emerges when particles collide – and what they can teach us about fundamental physics. Schlotterer approaches scattering amplitudes from a string theory point of view while Cachazo brings perspectives from quantum field theory.

Inside the Perimeter sat down with them to find out more about the visitor experience.

Inside the Perimeter: Tell us about the experience of visiting for a year. What are the benefits of staying for so long?

Oliver Schlotterer: This one-year format for the visit was completely unique to me. I did go for several two-week visits, four-week visits, to various places before, but I have never had such a relaxed opportunity to really go to a place and get semi-stable and settled. 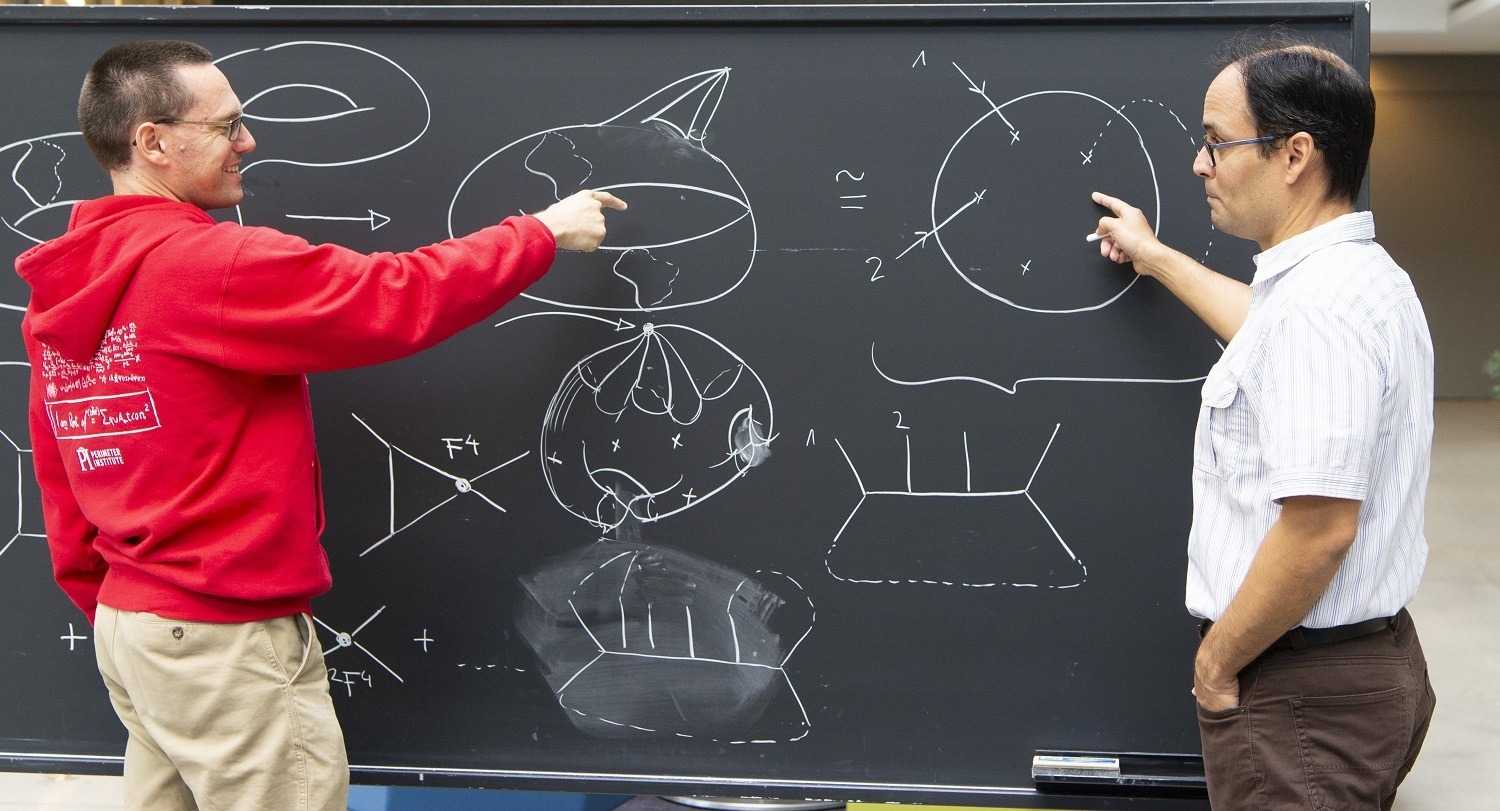 Freddy Cachazo: One of the major things that you can see is that Oliver has become an intrinsic part of the research group. During this year, he has co-supervised my graduate students. My two students, Alfredo Guevara and Sebastian Mizera, have become very close to Oliver. Both of them have been working on several research projects with Oliver, and at the same time they work on research projects with me – so they have been exposed to a completely different line of research. That’s impossible if somebody comes even for a month. A month is not enough to establish a relationship like that. Here at PI, we have the Perimeter Scholars International (PSI) program. Oliver also became the supervisor of two PSI students, which is impossible if the person only comes for even three months at a time.

Inside: How was your experience teaching in the week-long PSI Winter School?

OS: This winter school is very different. The idea was to get the students actively engaged from the very first day. We would bring a topic or some suggestions of what to work on, but it’s really up to the students what happens there. This format was new to me, so at the beginning I was a bit worried. But it was so fabulous to see the enthusiasm of the students and the fact that they were really willing to dedicate a 10-hour day and longer to really get a grasp on the topic. These were admittedly difficult and technical things that we suggested, but they were willing to dive pretty deep and to get their hands dirty. 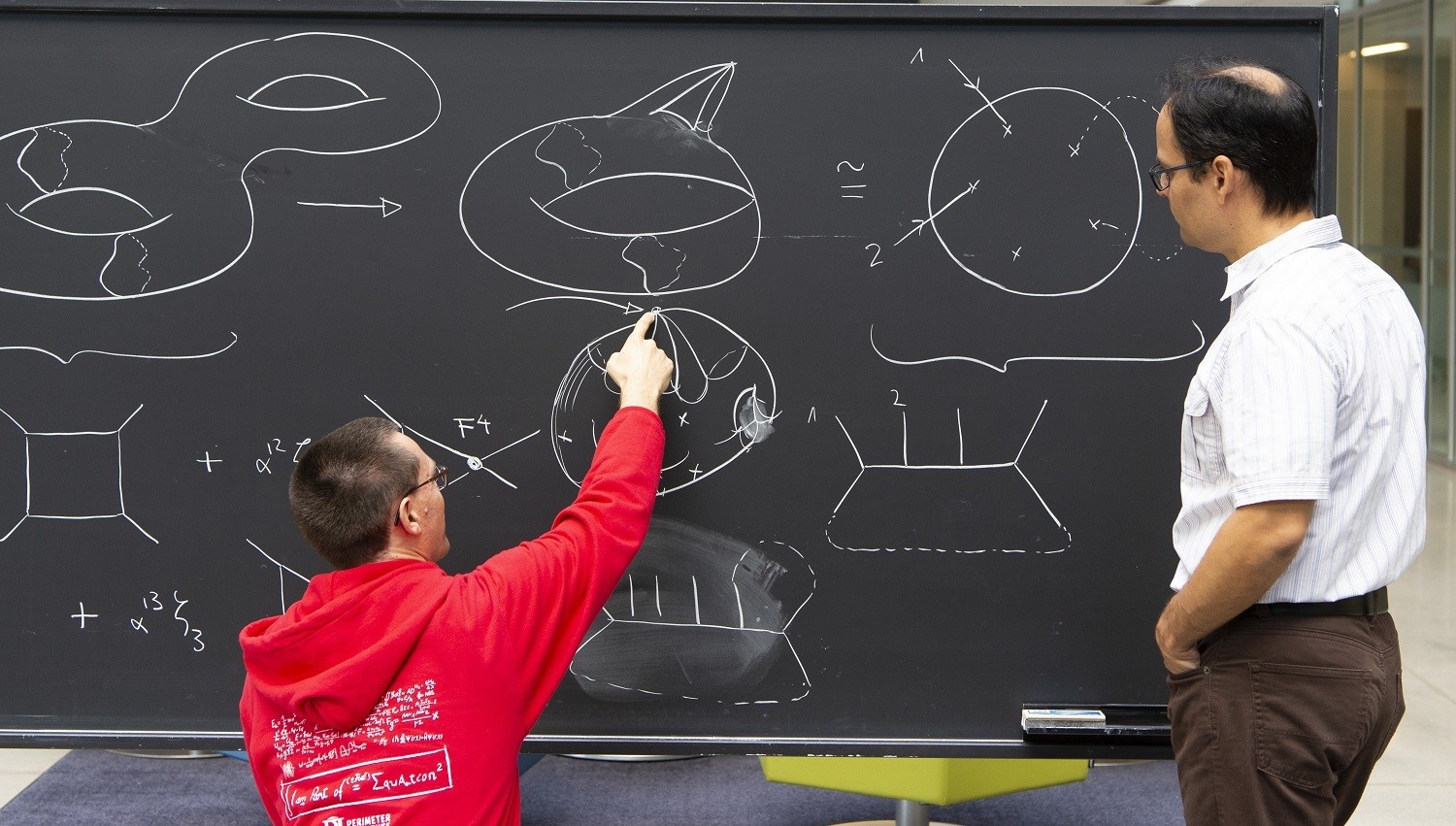 FC: I’m not sure that there are many people who would be willing to sit like Oliver did for five days with the students!

OS: You might argue that a school with 200 students sounds like a bigger multiplier factor, but I guess reaching two or three persons deeply is more valuable than giving a shallow exposure to a large amount.

Inside: What’s the benefit of immersing yourself in the PI culture instead of doing research the entire time?

OS: Our research interactions were of the form of sharing ideas. It’s not at the level that we are doing complete calculations together. It’s more like exchanging the visions. I would expect that it might be on larger time scales that the fruits of this will come to appearance.

FC: And the way to share the visions and to establish possible collaborations in the future is to invest in the students. That’s one of the reasons we spend a lot of time with students.

Inside: Oliver, you also helped organize a workshop at PI on scattering amplitudes in April. What was the impact of that workshop on the field?

OS: The papers that might have been inspired by the workshop are not yet written, so it’s hard to pinpoint anything measurable, but it was great for all of us to have the opportunity to exchange. The participants were very open, also sharing unfinished ideas. This was very valuable diffusion in different directions. The workshop also coincided with the PSI course that Freddy and I were teaching. The course was three weeks long and the workshop covered the middle one. So we decided to go for an adventurous experiment by outsourcing the middle week of lectures. We invited five of our workshop participants to give lectures. Two of them were given by former PSI students. The students really got a lot of different viewpoints.

Inside: You received a prestigious Starting Grant from the European Research Council, which you will be taking to Uppsala University in 2019. What is the future of your collaborations with Perimeter Institute?

OS: Now I will have the equipment to host Freddy!

FC: Exactly. Part of the benefits of bringing people as visitors is that now we have connections. Now, all of a sudden, we have a very strong bridge with Uppsala University and we didn’t really have to go there to establish the bridge. Having somebody like Oliver for a year is doubling the size in terms of impact of what we can do, and in a very cost-effective way.

Inside: What is the most rewarding part of the visitor program?

OS: All this freedom to be spontaneous, to do on a given day what inspired me the moment of waking up. This mixture of interaction on all levels. One of Freddy’s students, Sebastian Mizera, has learned a lot of new mathematics that is really inspiring. He already established some collaborations with mathematicians in the US and is doing things that I had no clue of and that I understand will be very valuable for me in the near future.