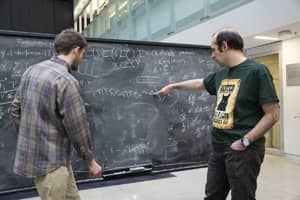 Their work begins with the knowledge that space is flat. While there are local wrinkles, they are wrinkles in a flat space, not wrinkles in curved space. The universe as a whole is within one percent of flat.

The problem is that it shouldn’t be. The vacuum of space is not empty; it is filled with fields that may be weak but cannot be zero – nothing quantum can ever be zero, because quantum things wiggle. According to general relativity, such fluctuations should cause spacetime to curve. In fact, a straightforward calculation of how much the vacuum should curve predicts a universe so tightly wound that the moon would not fit inside it.

In this paper, Nelson and Afshordi make no attempt to solve it, but where other cosmologists invoked an offsetting constant and moved on, Nelson and Afshordi went on to ask one more question: Does adding such a constant to cancel the vacuum’s energy guarantee a flat spacetime? Their answer: not quite.

The vacuum is still filled with quantum fields, and it is the nature of quantum fields to fluctuate. Even if they are perfectly offset such that their average value is zero, they will still fluctuate around that zero point. Those fluctuations should (again) cause space to curve – just not as much.

In this scenario, the amount of curve created by the known fields – the electromagnetic field, for example, or the Higgs field – is too small to be measured, and is therefore allowed. But any unknown field would have to be weak enough that its fluctuations would not cause an observable curve in the universe. This sets a maximum energy for unknown fields.

A theoretical maximum on a theoretical field may not sound groundbreaking – but the work opens a new window in an unexpected place: particle physics.

New kinds of quantum fields are often associated with proposals to extend the Standard Model of particle physics. If Afshordi and Nelson are right, and there can be no such fields whose fluctuations have enough energy to noticeably curve space, there can be no unknown particles with a mass of more than 35 TeV. The authors predict that if there are new fields and particles associated with an extension to the Standard Model, they will be below that range.

For generations, particle physics has made progress from the bottom up: building more and more powerful colliders to create – then spot and study – heavier and heavier particles. It is as if we started from the ground floor and built up, discovering more particles at higher altitudes as we went. What Nelson and Afshordi have done is lower the sky.

There is a great deal of debate in particle physics about whether we should build increasingly powerful accelerators to search for heavier unknown particles. Right now, the most powerful accelerator in the world, the Large Hadron Collider, runs at a top energy of about 14 TeV; a proposed new super accelerator in China would run at about 100 TeV. As this debate unfolds, this new work could be particularly useful in helping experimentalists decide which energy levels – which skyscraper heights – are the most interesting.

The sky does indeed have a limit, this research suggests – and we are about to hit it.