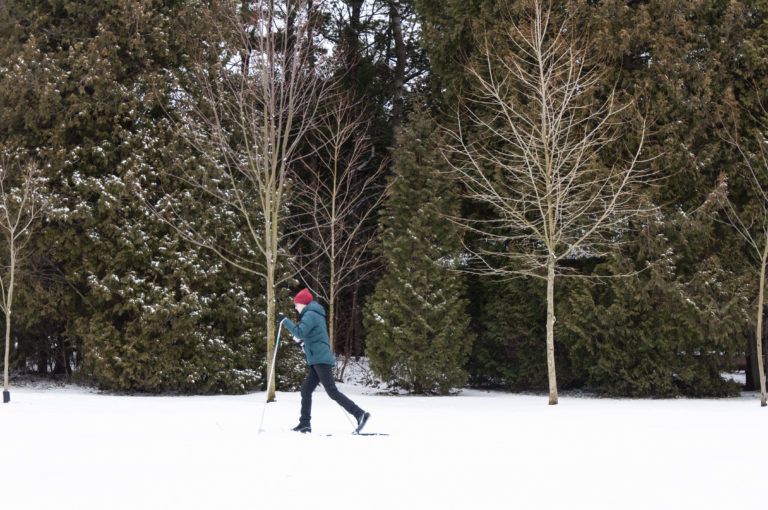 During the Perimeter Scholars International (PSI) annual Winter School at the outdoors-focused Ontario’s Camp Kintail, near the town of Goderich, the 25 master’s students from 17 countries tackled cross-country skiing, curling, and open questions in theoretical physics.

The first one is research, research, and more research. The students form groups led by postdoctoral researchers and faculty, and each group tackles an open research question in physics. The intense science sessions take place in three-hour sprints each morning and evening for the full week.

“We want them to have research experience with people who have more experience than they do,” Xu says. The 10-month PSI program has always been famous for how intense it is, but Winter School is designed to challenge the students in new ways. Each student is encouraged to work on something that’s outside their primary research interest.

“It’s like a re-ignition. Maybe they find their own passion for what they’re going to do,” she says. The projects can help sharpen their knowledge about what they’re interested in and what they’re good at, and help cement upcoming career decisions. But despite the intense research focus, Winter School also provides a bit of a stress break. Xu said for many students, particularly those who grew up in warmer climates, the impact of winter on mental health “can break morale.”

For this one week, students are relieved of their other homework and assignments. Between the two daily research sessions, they get a chance to play: learning how to snowshoe or skate, trying their hand at archery, and walking along the shore of Lake Huron. It’s all about embracing the season and its activities. “Winter isn’t going anywhere, maybe until April, and it can be fun,” Xu says.

And though in the past some students have published papers based on their Winter School research, that’s not necessarily the goal. “There’s no expectation from Winter School except what each person gets out of it. All we expect is that they learn.”

Elizabeth worked in a group with Perimeter industry partners 1QBit, a Canadian quantum computing company, which is a partner in the Perimeter Institute Quantum Intelligence Lab (PIQuIL). “What we’re doing right now switches our research thinking on. It’s a different way of thinking and a different way of understanding a topic,” she says.

Elizabeth is also doing her master’s research essay with 1QBit. “It’s a very flexible program. I think on the surface it looks really structured, but they work with you to make it the experience that you want. Like being able to do my PSI essay with industry — they were open to, and excited to explore, that.”

Dalila says she would not have been able to continue her physics education in cosmology without financial support, and feels fortunate to be among people at Perimeter who are at the forefront of research.

“There’s a lot of freedom as a physicist. It’s a great opportunity to choose, to put your finger on exactly what you want to do in your career here, because there’s just such a broad spectrum of research going on,” she says. “I’m extremely grateful for this whole thing.”

Before this year, Bruno had never seen snow, and all the winter activities were new to him. “I thought it would be worse actually! People scared me a lot about Canadian winter,” he says.

“But what makes this experience worth it is the research. It’s a very valuable experience, being put in this environment in which you only have to care about doing research and being put onto a problem that people actually care about, and no one knows the answer. It’s an opportunity that I don’t think I would get anywhere else in the world.”

Bruno has already decided to stay in Canada and do his PhD with supervisors Beni Yoshida (Perimeter Faculty) and Eduardo Martin-Martinez (University of Waterloo).

Maria studied at the Institute for Quantum Computing for a year before coming to Perimeter to be exposed to cutting-edge research in different fields, with an emphasis on interdisciplinary physics.

“Last year was my first winter, the first time I saw real snow. So that was a big shock.” Her Winter School research problem is also new to her. “It’s introduced me to machine learning, which I had never explored before – and it has elements of quantum computing, which is part of my background.”

Maria says that beyond the research itself, a sense of community is the most valuable thing about PSI. “You think it’s conducive to overworking and incredibly competitive, and it’s really not. It’s about collaboration and supporting each other, and it’s okay to ask questions.”

Jonas had started a master’s program in Germany before a few of his professors recommended that he try to get into Perimeter. “My university was focused in certain areas; here, it’s really the whole spectrum,” he says.

Though his own research is in quantum gravity, his Winter School project is pushing him in another direction. “I’m doing a project in mathematical physics. I like it!”

Melissa came to Perimeter from Mexico specifically because of the calibre of the researchers and visitors in her area of interest, quantum gravity.

“It’s an amazing opportunity to be here – in Winter School and in the PSI program. It’s like a dream come true. I really love to be in a place where there’s a lot of research going on,” she says.

“I’m still getting used to the weather, but I really love it here.”

Ghislaine de Wit – US
Project: Correcting the notion of entanglement in Bell scenarios

Ghislaine has always been ahead of the curve. She graduated from high school at age 16 and finished her undergraduate degree at 20. Now, at PSI, she finally feels like she fits in and is challenged.

“This is the first time that I can’t see something once and get it. PSI is very intense; it’s awesome,” she says. “I’ve learned a lot about myself, and I really love the community that we’ve built. This is by far the most friends I’ve ever had at one point.”

Winter School has been an opportunity for her to explore quantum foundations, and a chance to be exposed to different research styles. But it’s also a bit of a rest. “Most people wouldn’t call six hours of physics a day a break, but it’s less physics than I normally do in a day.”