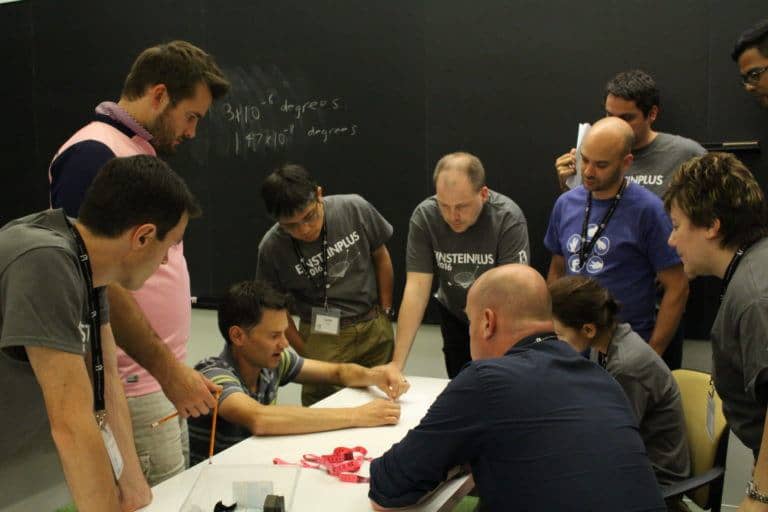 The boisterous chatter can be heard down the hallway from the seminar room where teachers are playing with Slinky-like springs.

“Very nice!” someone calls out, as a spiraling wave undulates down one of the springs.

At coffee break, the room erupts in laughter as Philip Freeman, a teacher from Vancouver and the session facilitator, flaps his arms in circles, demonstrating his “gravitational wave walk.”

This is EinsteinPlus, Perimeter’s annual one-week intensive workshop, drawing more than 40 high school physics teachers from around the world.

It’s designed to arm teachers with ideas and hands-on tools, including Perimeter’s classroom resources, to spark a passion for physics in their students. The teachers are encouraged to share what they’ve learned with their fellow educators back home, broadening the network of teachers using the materials and resources.

This year’s sessions focus on topics that have recently made headlines: the discovery of ripples in spacetime known as gravitational waves, the Nobel Prize-winning discovery from the Sudbury Neutrino Observatory (SNOLAB) that neutrinos have mass, and the anticipated discoveries from the Event Horizon Telescope, a global array set to get the first-ever images of the swirling gas and energy around a black hole.

When it comes to explaining such concepts with hands-on classroom activities, ingenuity is the name of the game. EinsteinPlus teachers have an arsenal of easy-to-find, inexpensive items at their disposal, from paper cups to Christmas ornaments.

Springs can be used to demonstrate all kinds of waves, but can also serve as an introduction to gravitational waves and how the Laser Interferometer Gravitational-wave Observatory (LIGO) discovered them. Marbles can double as neutrinos. A cardboard box with holes can represent a neutrino detector. A homemade waterfall in a plastic container can represent a black hole environment. Pop cans attached to Christmas tinsel can be used to demonstrate the photoelectric effect.

The teachers at EinsteinPlus are already physics aficionados, looking to share ideas. Yvonne Dietzenbacher from the Netherlands was an engineer specializing in plasma systems before becoming a high school physics teacher. But knowing physics and teaching it are two different things: Dietzenbacher says her current job, making physics fun and interesting, is far more challenging.

“I need more inspiration, and I need to find out what students find difficult and how can I make it clearer,” she says.

The Netherlands is changing its physics curriculum, putting more emphasis on modern physics and recent discoveries, she says. So learning at Perimeter, where modern physics is researched, taught and shared at a high level, “was a great opportunity,” she says.

The physics curriculum is also a changing in Saskatchewan, which led to a contingent of teachers from that province at EinsteinPlus this year. “We are taking the emphasis out of the 1600s and bringing it into the modern century,” says Rory Bergermann, a teacher from Saskatoon.

Nyein Chan, who teaches at the International School Yangon in Myanmar, says some students know as much, or more, than their teachers. “One of my students came to me one day with questions about the Higgs boson,” Chan says.

The teachers also discuss the possibilities and limitations of analogies that might illuminate certain concepts. Can loonies and toonies that go into a vending machine represent the “value” of chunks of energy, for example?

“We are giving 42 teachers the tools to take back into their classrooms and teach modern physics, which is a beautiful thing,” says Edel Vo, another teacher and facilitator from Vancouver.

Most of all, EinsteinPlus is about inspiring passion, says Simon Levesque, a teacher and facilitator from Trois-Rivières, Québec.

“I think it is important to light the fire, to ignite the passion,” Levesque says. “In a sense, it is like what pianists will do with their students as they learn to play. I want them to have the skills. But I also want them to be curious. I want them to like science. That is hard work, but that is my job.”