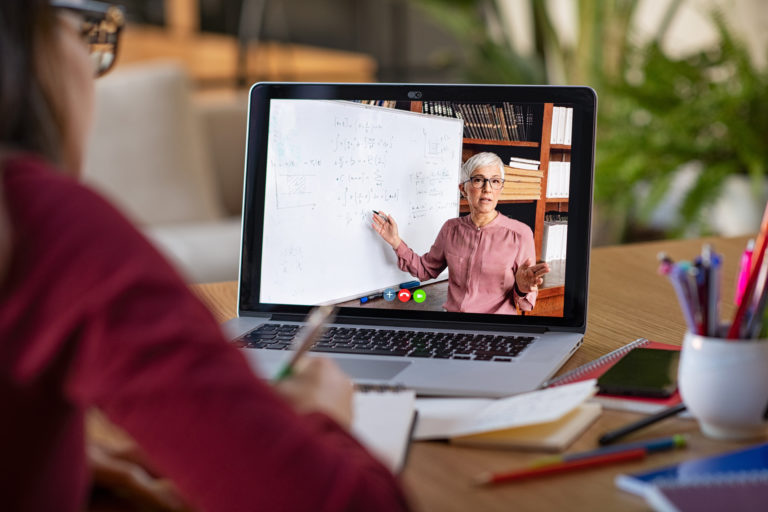 “The goal of a high school physics class is to give students a real sense of science,” says physicist and Perimeter outreach scientist Kelly Foyle. “The goal is to let them come up with theories and test ideas. To do experiments. To work with data.”

It’s hard enough to do at the best of times. But how can students perform in-class experiments when they’re not actually in class? How can they connect with ideas when they’re connected by Zoom?

Perimeter has 20 multimedia classroom resources for elementary, middle school, and high school students. Each contains a set of lesson plans, hands-on activities and demos, modifiable worksheets, background information for teachers, and original PI videos. Topics range from general ones such as climate change and energy, to specialist ones such as  black holes and dark matter.

Early in the pandemic, Perimeter published a module-by-module description of how each piece of each resource could be adapted for online education. Some lessons are less suited for online learning, while others turned out to be perfect independent study projects. Most required some in-between level of modification: Youtube recommendations replaced in-class demonstrations; things that could be found around the home were swapped in for more specialized experimental materials. For example, the stellar evolution resource usually involves a group activity in which students sort cards. The Perimeter team has recreated those cards in Padlet, an app that integrates with Google classroom, among other platforms. Students can meet inside the virtual classroom and sort the cards there.

Perimeter also began offering virtual versions of its professional development almost immediately. The team has offered some teacher training workshops through partner organizations, such as Math for America, the Institute of Physics, and the Science Teachers’ Association of Ontario. Other workshops are open to anyone who wants to register. All are free.

“The response has been great, with teachers from across Canada, China, Turkey, France, Japan, United States, and Nepal attending,” says Tonia Williams, who manages PI’s educational outreach programs. “The survey responses say they want more.” The latest addition is Rwanda, with 800 teachers there signing up for upcoming workshops.

Currently, the Institute is running two or three of these teachers’ workshops a week. Each session walks teachers through online adaptations of particular Perimeter resources.

For instance, Foyle explains how to search for exoplanets – planets that orbit stars other than our sun — without leaving your house. “In the classroom we use a flashlight for the star and Styrofoam balls on skewers for the planets,” she says. “Students move the balls in front of the flashlight and measure the dimming with a light meter. They make predictions about what happens when the planets are bigger or smaller, moving faster or slower.” At home, she says, “A lightbulb and circles cut out of a cereal box work pretty well. And it turns out that if students have smartphones, there are free apps that turn them into light meters.”

Having developed a feel for the subject, students look at real data coming NASA’s Spitzer Space Telescope, which spent twenty days pointed at the star Trappist-1, just 39 lightyears from Earth. “Trappist-1 is known to have seven exoplanets,” says Foyle. “Trappist is interesting because the planets are rocky (like Earth, not like Jupiter) and three are in the ‘habitable zone’ so they might have liquid water. Students can see the light curve for each, and order them by size. It’s real data, real learning – real physics.”

Teachers who would like to help their students explore the frontiers of science while stuck in their homes can keep track of upcoming workshops here.