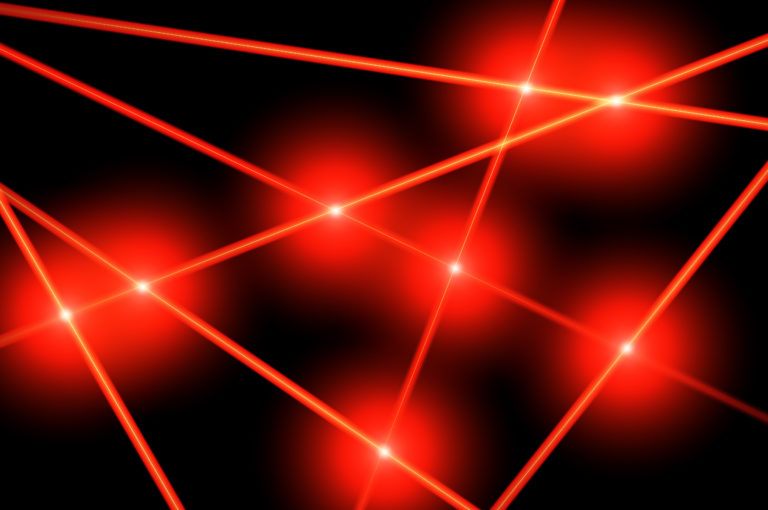 by Eamon O'Flynn / Perimeter Institute for Theoretical Physics
on Nov 17, 2017

Goldfinger tried to kill James Bond with a laser. Star Wars is full of lasers that go “pew-pew!” LaserDisc was a thing in the ’80s. If you grew up in the ’90s, you probably almost blinded a friend with a laser pointer you bought at the corner store.

How did we get from not having lasers at all just decades ago to having them everywhere today?

Albert Einstein established the foundations for the laser in his 1917 paper “On the Quantum Theory of Radiation.” He probably didn’t imagine the technological opportunities it would spark; he was simply seeking to understand nature, and radiation was part of it.

In 1960 – four decades after Einstein’s paper was published – Theodore H. Maiman operated the first (barely) functioning laser. Over the coming decades, scientists would pioneer gas, solid-state, fibre, photonic crystal, semiconductor, dye, and free-electron lasers. Want to know how they work? Our pal at MinutePhysics has you covered:

So what are lasers good for? Nowadays, a more reasonable question might be what aren’t they good for?

When they were first invented, lasers were derided as “a solution looking for a problem.” Now they’re a solution to an ever-growing list of problems. Here’s just a handful:

These things are everywhere. Buying groceries? Barcode scanner. Checking in at the airport? Barcode scanner. Order something from Amazon? The item is located within a huge warehouse using a barcode scanner. (Click here to find out how they work.) Next time you’re grumbling about the long line at the supermarket, think how much slower it’d be if every item had to be manually punched into a cash register.

You like the internet? You can thank lasers for making it speedy. Fibre-optic technology – sending information from one place to another using light pulses through optical fibre – depends on lasers. Without lasers, we’d be stuck with slow internet speeds via electrical cables. Fibre-optic technology is used to transmit telephone and television signals, too.

Remember when LIGO detected gravitational waves — one of the most important scientific milestones of the century? It detected them by sensing tiny differences in the lengths of two lasers. We also use lasers to help us peer deep into space (and soon, perhaps, to propel miniature spaceships), make microscopic measurements, and to control the tiny quantum realm.

Some of the most iconic moments in film history

This one isn’t as obvious, but it’s probably the most pervasive of all. If you watch movies, you’re going to see references to lasers. From sci-fi to action to comedy, in Hollywood’s hands the humble laser has saved the world, destroyed the world, and everything in between.

Lasers can cut, weld, drill, measure, point, get you a speeding ticket, blow your mind at a Pink Floyd concert, create works of art like 3D crystal engraving, print, make holograms, keep birds away from airport runways, let you blast your friends at Laser Tag – the list grows practically every day.

Next time you see a laser, just say “thanks physics” and high-five a photo of Einstein. You’ll look like a weirdo, but you’ll know inside it was the right thing to do.