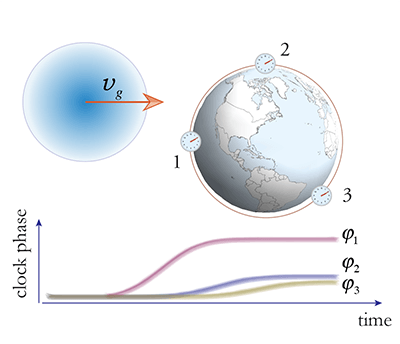 Physicists are pretty sure dark matter exists. Based on the way they can detect its gravitational effects on large scales, they infer dark matter makes up about a quarter of the “stuff” of the universe – making dark matter five or six times as common as normal matter, universe-wide.1

Closer to home, it’s generally thought that the density of dark matter in our solar system is approximately equivalent to one proton for every three square centimetres – or about 8 billion tons within the orbit of the Earth.

But even though it’s apparently all around us, we don’t know much about dark matter. We’ve been able to rule out a few possibilities – dark matter is not just clouds of normal matter, it’s not anti-matter, and it’s not hiding in huge black holes.

Most researchers think that dark matter is probably some kind of exotic particle, which is all around us but can interact with us only weakly – a kind of ghost universe haunting the universe we know. But all our best efforts to detect even one such ghostly particle have so far turned up empty.2

All of this invites an important question: What if dark matter isn’t composed of particles? What if it doesn’t resemble our traditional ideas of matter at all?

In a recent paper published in Nature Physics, Perimeter Associate Faculty member Maxim Pospelov and his collaborator, Andrei Derevianko of the University of Nevada, are investigating exactly that possibility. What if, they ask, dark matter isn’t composed of particles, but rather stable structures within a field that pervades all of spacetime?

Picture a field with crackles in it, like broken safety glass. The field itself might be undetectable, the way perfectly clear glass is invisible. But the crackles in it are a different matter. Just as the cracks in glass can be seen, the crackles in the field can – perhaps – be detected.

In fact, the researchers contend, perhaps we could detect the crackles with instruments we already have: atomic clocks, laser interferometers, and gravitational wave detectors.

This particular take on dark matter – dark matter as a crackling of the glass – is known as topological dark matter, and the crackles themselves are generically called topological defects (TDs). You can think of these TDs as a more or less stationary web-like backdrop to the universe, and imagine the Earth crashing through it at speeds driven by the rotation of the galaxy – about 300 kilometres per second. From our Earth-bound perspective, these TDs would seem to blow past us like spider webs in a galactic wind.

When an atomic clock crosses a TD, Pospelov and Derevianko contend, it would either slow down or speed up, depending on the nature of the interaction. That by itself is not terribly useful: the effect would be very small, and lost in tiny variations of timekeeping inherent to even the best clocks.

But if one had a network of atomic clocks, an encounter with a TD would look like a wave of such out-of-synch events, passing through the system at that characteristic 300 kilometres per second. That pattern, rather than the effect on individual clocks, should be detectable.

The beauty of this method of detection is that several networks of atomic clocks are already operational. For instance, the 30-odd satellites that support the Global Positioning System (GPS) and other satellite navigation systems each carry an atomic clock. The Earth-bound clocks of atomic-clock research laboratories are less well networked, but far more sensitive. Either network could potentially be used as a TD detector.

What would a TD signal look like? The researchers calculated that a dark matter topological defect passing through the satellites surrounding earth would cause clocks of the GPS system to go out of sync in a characteristic pattern, over a span of about three minutes.

When Pospelov and Derevianko’s new idea was initially presented at conferences last year, it sparked a great deal of interest and a wave of proposed data analysis projects. It was, for instance, widely discussed at the workshop “New ideas in low-energy tests of fundamental physics,” held at Perimeter in June 2014.

The two authors themselves are among those pushing the work from theoretical to experimental. Derevianko is collaborating with researchers at the Nevada Geodetic Laboratory, which developed and maintains the largest GPS data processing centre in the world. They will be looking for TD signatures in the atomic clocks of the GPS system. Pospelov has been working with scientists from the gravitational wave detector LIGO to work out what TD would look like when passing through interferometers located 3,500 kilometres apart.

So is dark matter really matter – or is it cracks in an exotic and invisible field? Perhaps, in this case, time will tell.

[1] The remaining roughly 68 percent of the energy budget of the universe is tied up in dark energy, about which almost nothing is known.

[2] There is some subtlety here around what it means to detect dark matter. Most physicists would argue that we have already detected dark matter through its gravitational interaction. What we’ve been looking for, so far without success, is some non-gravitational effect from dark matter. Gravitational interaction by itself doesn’t tell us much – it cannot distinguish between objects the size of electrons and objects the size of small asteroids, which leaves us truly in the dark about dark matter. Almost all of the current efforts in non-gravitational detection of dark matter are designed to look for microscopic particles, so far with no success. Interestingly, these methods are completely blind to dark matter lumps bigger than, say, a fleck of dust – which is how topological dark matter could exist, yet remain undetected.