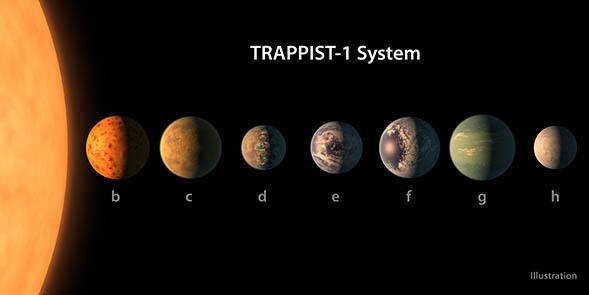 When scientists work out the answer to big puzzles, they usually write a paper about it. A group of Canadian physicists have gone a step further by turning the research into jazz.

As explained at Quanta Magazine, when the Trappist-1 system of seven planets was discovered, it was noted that gravity could pull the orbits apart in as little as a million years. In a new paper, Daniel Tamayo and colleagues at the Canadian Institute for Theoretical Astrophysics (CITA) show how the planets could have remained stable for the first 50 million years after formation — not a definitive answer, but an improvement on the initial simulations.

Fellow CITA postdoc Matt Russo saw their work, and noticed that it resembled music theory he comes across as a jazz guitarist. Russo, Tamayo, and the musician Andrew Santaguida teamed up to translate the system’s orbits into music.

“It’s really remarkable that it worked out like that,” Russo told Quanta. “Even with a different pattern of resonances, you wouldn’t get a chord that sounds as good.”