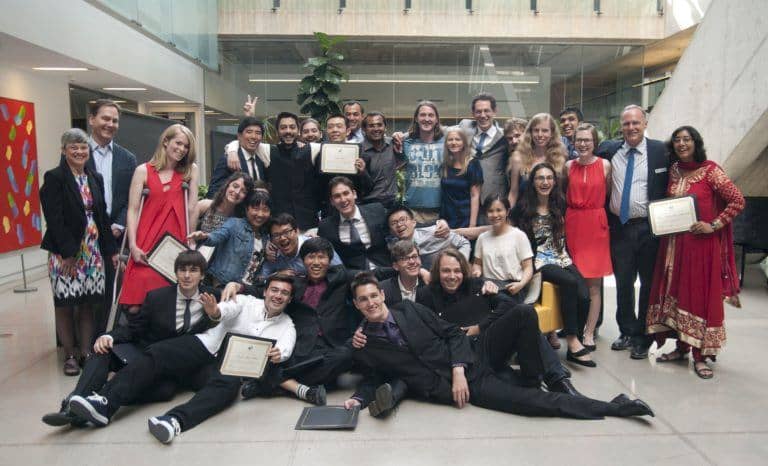 It was meant to be a week in the snowy wilderness, where Perimeter Scholars International (PSI) students split their time between open research questions and outdoorsy Canadiana, far removed from the toil of their regular classes and tutorials.

Now, it has turned out to have been that and more.

Four of the students who attended Perimeter’s 2016 PSI Winter School are co-authors of a research paper recently published in the journal Physical Review B, the largest and most comprehensive international journal specializing in condensed matter and materials physics.

A fifth student co-authored a paper relating to one of the Winter School research projects, and a third paper stemming from the week-long retreat is currently being finalized.

While PSI students publish papers each year, often related to their end-of-year research projects, no one attended the week-long retreat in Huntsville, Ontario, obliged to produce results.

“We wanted it to be as flexible and free as possible,” said Perimeter Academic Program Director James Forrest. “The idea was to sit in a group, discuss things, think on your feet, and develop that research skill set.”

Before the retreat, Perimeter faculty set out seven research challenges in which they suspected good progress could be made in a week. Then, a mix of Perimeter researchers joined the students to tackle the problems head-on.

“We had master’s students, PhD students, postdocs, PSI fellows and faculty all working together,” Forrest said. “It is one of the few, if not the only, time you had such a range of people working on a project together. If we didn’t do the Winter School, these papers wouldn’t have happened.”

It’s yet another unique aspect of the 10-month master’s program. Only accepting roughly 30 students each year from more than 600 applicants, the program is quickly becoming one of the most sought-after physics programs in North America.

Lauren Hayward Sierens is a former PSI student who is now doing her PhD at Perimeter and the University of Waterloo. Together with Perimeter Associate Faculty member Roger Melko, she led one of the seven research projects at the 2016 Winter School.

It was their project, studying the entanglement entropy in free bosons on a lattice, which produced the recently published paper. In one week, the students learned to code in Python, then studied entanglement entropies for differently shaped regions.

“When you measure entanglement, the form you get depends on the shape of the region entangled,” she said.

“In one dimension, there’s an exact form. In two dimensions, we have models with a lot of the right features, but we still don’t have the perfect model. We were able to show that the question isn’t yet answered. There’s more work to do in this field.”

Research wasn’t the only point of the Winter School. It was also a chance to step back from the grind of classes and tutorials, and soak up some Canadian winter. The students went snow-shoeing and ice-skating, to a maple syrup “sugar shack,” and even ventured out for a snowy game of cricket to celebrate Australia Day and Indian Republic Day.

In the end, Forrest said the best lesson of all was a simple one: “Research is fun.”

Applications are now open for the 2017/18 PSI program. For details on how to apply, visit here.