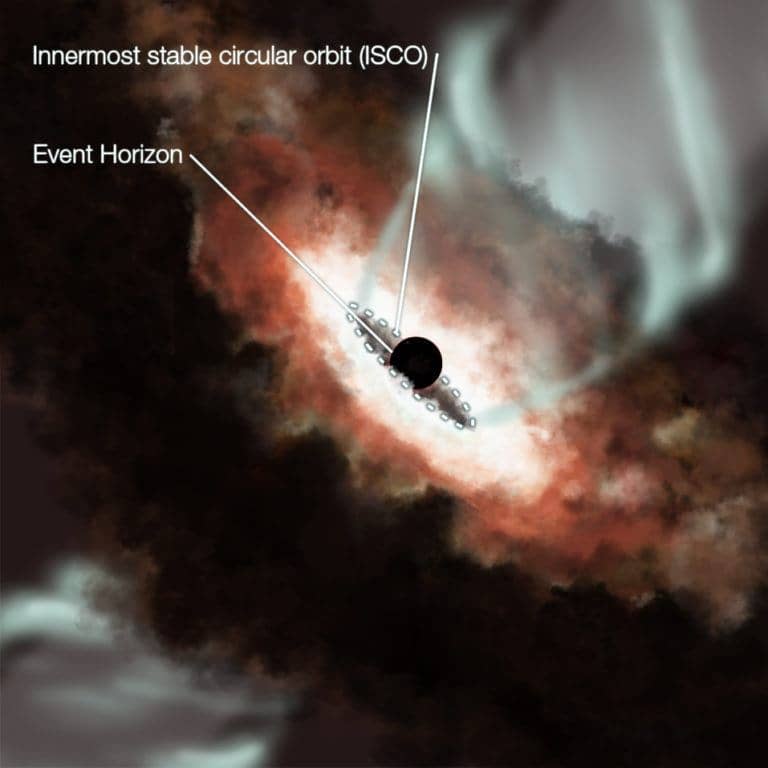 Many galaxies, including our own Milky Way, have a huge black hole lurking at their cores. In about 10 percent of such galaxies, the hole gives off huge, tight streams of electrons and other sub-atomic particles traveling at nearly the speed of light. These powerful jets can extend for hundreds of thousands of light years.

They can be so bright that they outshine the rest of the galaxy combined. And yet, little is known about how such jets are formed. The Event Horizon team, in their current paper, is working to find out more. By combining and comparing data from three radio telescopes, they are beginning to image the base of such a jet – its launchpad – for the first time.

The team, coordinated by Shep Doeleman at MIT’s Haystack Observatory, used the Event Horizon telescope, which is actually a network of three radio telescopes spread out over the Earth.

The subject of their study is M87, a giant elliptical galaxy just over 50 million light years from our own. That is close as galaxies go, but a long way away considering that the horizon of the black hole the team imaged is about the same size as a single solar system.

It is as if the telescope could make out a poppy seed from across a continent or spot a softball on the moon. “These are some of the highest resolutions ever accessed in the history of science,” says Broderick. Broderick sums up the problem the team tackled: “With black holes, stuff is supposed to go in, and yet here we see all this stuff coming out with huge energies. Where does that energy come from?” There are two possibilities.

The first is that a black hole itself is a great reservoir of energy – a spinning black hole has a huge amount of rotational energy that the jets might tap. The second possibility is that the energy might come from some accretion process – the accretion disk is the dusty spiral of stuff falling into the black hole and the physics of accretion is not yet well understood. With the new data coming in from M87, theorists like Broderick can start to tell the difference between these models of hole-driven jets and accretion-driven jets.

The image is not yet sharp – it is trickling in pixel by pixel – but that, says Broderick, “is enough to tell the difference between your mother and your daughter.” With images like the one the team is working on, we can begin to narrow in on the origin of ultrarelativistic jets. “The first thing we learned is that the launching region is quite small,” says Broderick. The jets are coming from quite close to the black hole’s event horizon: the point of no return where even the light from objects tumbling into the black hole is lost.

While this is not quite enough to rule out the idea that jets might be powered by accretion physics, it is clear that energy is coming either from the black hole or from the accretion processes happening right next to the black hole. “We are now beginning to see that spin is playing a role in jet production,” says Broderick. “That is, not only can we say that the jets originate near the black hole, but because the emission region is so small, it must be coming from a rotating black hole.” “The black hole is really the engine that drives the jet,” he adds. “It’s an extraordinary thing.”

The Birth Cry of a Black Hole

Might we someday predict – and then carefully observe – the birth of a black hole? Perimeter Faculty member Luis Lehner thinks it’s possible.