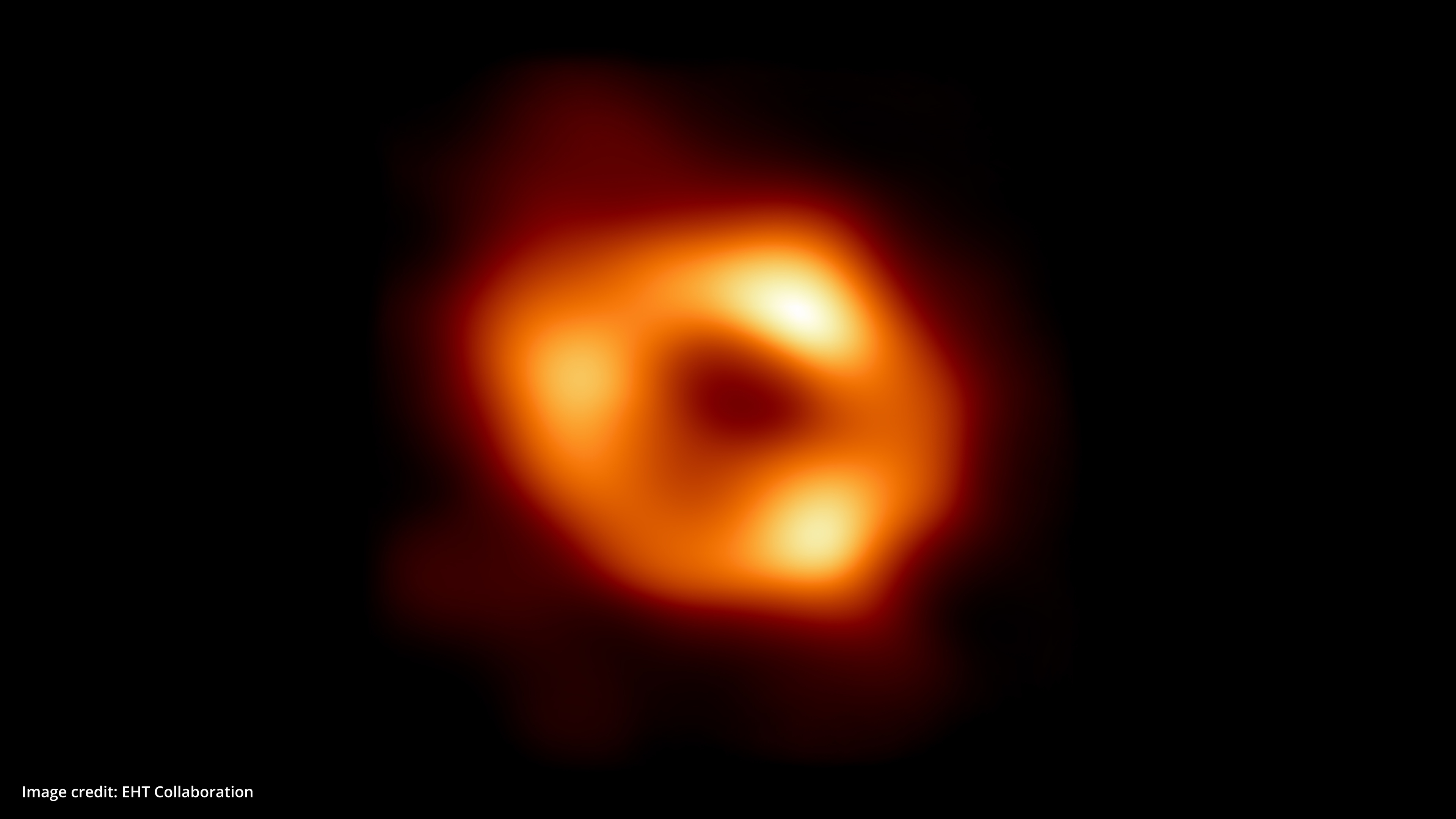 Humanity’s first look at the supermassive black hole at the core of our Milky Way galaxy, called Sagittarius A* (or Sgr A*), was revealed today by scientists in the international Event Horizon Telescope (EHT) collaboration.

The landmark result was achieved by creating what is essentially an Earth-sized telescope – a network of eight radio telescopes on five continents, all focussed on a single spot on the night sky: the heart of the Milky Way, where evidence suggested an object of extreme gravity affects the stars and space around it.

The image of Sgr A* reveals a dark centre encircled by a fiery ring spinning at the core of our own spiral galaxy, roughly 27,000 light-years from Earth.

Because Sgr A* is the second black hole to be observed and imaged by the EHT collaboration – in 2019 they released a groundbreaking image of a much larger, more distant black hole in the Messier 87 (M87) galaxy – it provides researchers with vital means to compare and contrast these mysterious phenomena.

“There is no greater advance in science than in going from one to two,” says Avery Broderick, an associate faculty member at Perimeter Institute and the University of Waterloo.

“With one, we have a peculiarity, an oddity, a unique manifestation of a complex universe.  With two, we now have a sample, a confirmation, a contrast and therefore the ability to distinguish the essential from the incidental. Sgr A* is different from M87 in many respects – it is 1,500 times lighter and smaller, 100,000 times more starved, and inhabiting a “typical” galactic environment – but their similarities are striking: the existence of an event horizon, exhibited in silhouette against the surrounding luminous plasma.”

The images captured by the EHT researchers show the dark central region from which light cannot escape, as well as a fiery ring of superheated gases swirling around the periphery of the black hole, light barely escaping to begin its 27,000-year journey to the EHT telescopes.

Studying Sgr A* presents two additional challenges that were not present with black hole in Messier 87 (M87*), surmounting either of which would have required a leap forward for radio astronomy – overcoming both demanded a revolution. First, because Sgr A* inhabits the centre of the Milky Way, we view it through the Galactic disk, in which the light is scattered producing an effect like a frosted window. The blurring and mottling of the image had to be somehow undone.

Second, because Sgr A* is significantly smaller than the black hole in Messier 87 (M87*), light and shining plasma complete their orbit of Sgr A* 1,000 times faster than around its larger cousin, completing a revolution in minutes. This variability of Sgr A* created a challenge for the researchers that Broderick compares to “taking a picture of a frenetic puppy chasing its tail” (as opposed to M87*, which is more akin to “photographing a sleeping old lion”).

Whereas for M87* it was straightforward to combine a full night of data to complete and sharpen the image, for Sgr A* this was impossible using the normal methods, so new techniques that could accommodate for Sgr A*’s tempestuous nature were needed.

Many of the strategies pursued to capture Sgr A* emerged from a workshop hosted at Perimeter in August 2019 called Dynamics and Black Hole Imaging. Broderick’s team at Perimeter developed image-modeling methods based on probability, known as Bayesian imaging, to address this variability.

The EHT collaboration accomplished this feat by creating a network of eight precision-timed telescopes at sites spanning the globe. All those telescopes zeroed-in on the powerful gravitational source at the Milky Way’s core, exploiting the Earth’s rotation for continuous observation of their target.

“The Event Horizon Telescope is a remarkable demonstration of the power of international scientific collaboration,” says Perimeter Institute Director Robert Myers. “Black holes were once only a theoretical playground for mathematical physicists. But the EHT collaboration has transformed black holes from theoretical ideas into objects for empirical observation and study. Perimeter is proud to be part of this unprecedented scientific endeavour, which is still just getting started.”

“Now, more than ever, the world is looking to scientists for an understanding of the world around us, and these ground-breaking images inspire a deeper fascination and curiosity about our universe,” said Bob Lemieux, Dean of Science at the University of Waterloo. “We are very proud of Avery’s leadership and dedication to the EHT collaboration and look forward to seeing the transformative work he continues to do at Waterloo.”

Because of the extreme gravity of black holes, understanding their inner working is crucial to testing, and perhaps revising, our best theory of gravity, Einstein’s general relativity.

“Just two decades ago, the notion of imaging black holes remained the stuff of science fiction,” says Broderick. “In the past few years alone we have imaged two black holes and elucidated the physical dramas that play out in their vicinity. The era of empirical strong gravity research has begun.”