Tickets for seats in the theatre are now sold out.

The live webcast will appear on this page 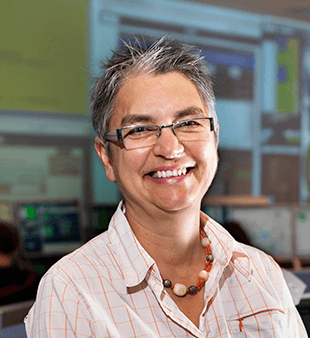 As a child, Quebec native Pauline Gagnon dreamed of understanding what the universe was really made of.

As an adult, she studied exactly that, working at the largest experiment ever built, CERN’s Large Hadron Collider. In her role as a Senior Research Scientist, based at Indiana University and working at CERN, she searched for dark matter particles in the decays of the famous Higgs boson, in the form of hypothetical particles called dark photons.

Now retired from active research, Gagnon is dedicated to inspiring other curious minds of all ages to ponder the same big questions that fascinated her as a child. Having worked in the CERN Communications group, she is adept at explaining the complex science of particle physics in engaging, comprehensible ways. She has delivered nearly 100 presentations to audiences in nine countries on three continents.

Gagnon’s popular science book, Who Cares about Particle Physics?: Making Sense of the Higgs Boson, the Large Hadron Collider and CERN, explains current issues in particle physics and explores the importance of fundamental physics in shaping not only our understanding of the universe, but society as well.

In her November 8 Perimeter Institute Public Lecture, Gagnon will explore the incredible (and improbable!) feats of ingenuity and cooperation that have led to one of humanity’s greatest experiments, and why such pioneering research, albeit “impractical” in terms of everyday usefulness, has changed the way we live and is vital to our collective future.