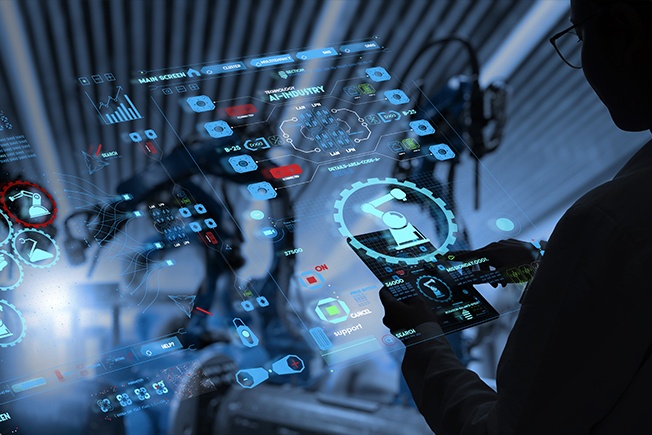 Many scientists enjoy taking on real-world challenges alongside their curiosity-driven research. And many commercial tech companies are sympathetic to the idea of advancing scientific research as they bring new products to market.

The result: more Perimeter physicists are working with tech giants like Microsoft and for start-ups like Xanadu or Agnostiq. The trend is most pronounced among postdoctoral researchers planning careers in a world where fundamental research and entrepreneurial ventures have never been closer.

Recent postdoctoral researcher William Cunningham studied quantum gravity at Perimeter. During that time, he began working with Agnostiq, helping the team develop interfaces for non-experts who want to deploy quantum algorithms to solve problems and perform calculations on quantum devices.

Agnostiq serves sectors like finance, where quantum computing plays a growing role in security, analysis, and other areas. Quantum computing has already begun to revolutionize financial tech and is expected to vastly increase the sophistication of simulations, projections, risk assessment, opportunity analysis, and more.

The challenges of fintech are light years away – literally and figuratively – from the distant regions of space where quantum gravity comes into play. But Cunningham found it natural to adapt his expertise from one to the other.

“The methodology is similar,” he says. “In both places, I use machine learning and quantum algorithms. Since these are relatively new techniques, there is great interest in understanding how they may be leveraged in both theoretical and applied research.”

Cunningham did his PhD at Northeastern University’s Network Science Institute. The institute embraces a broad interpretation of “networks,” incorporating theoretical mathematics and physics, social and political science, and epidemiology and biology. The program inculcates a sense of connectedness and of applying learning in one area to something completely different.

That spirit of openness to new challenges and new connections only grew during his time at Perimeter.

“There has been an increased emphasis on ‘inter-approach collaboration’ in the quantum gravity community. There are a handful of viable approaches that may be complementary rather than competitive, especially when it comes to computer simulation,” he says. “A main lesson drilled into me is that methodology in one area can be hugely useful in another area, but you don’t necessarily know how until you start talking to people.”

Cunningham uses machine learning, which is a very flexible type of artificial intelligence through which computers teach themselves to get better at solving problems and completing complex tasks. Whether it’s developing better simulations of the interactions between gravity and quantum effects, or creating better currency-trading algorithms, Cunningham’s approach can help move the needle.

These kinds of consulting projects are not always solely about applying emerging scientific approaches to advance business interests. Physicists can also capitalize on their clients’ resources to advance their fundamental research.

Mathematical physicist Modjtaba Shokrian-Zini studies whether the universe could have grown into existence starting from just a single particle. The modelling he uses involves “tensor networks,” a type of mathematical object that demands intensive computing power.

In 2020, Shokrian-Zini did an internship at Microsoft, and that relationship has continued to grow. Through its research division, Microsoft is providing him with the computing resources he needs, as well as an esteemed collaborator, Michael Freedman, who founded Microsoft’s “Station Q,” a quantum computing research facility in Santa Barbara.

“This is pure physics research. There is no ‘product’ or anything of the sort involved,” Shokrian-Zini says. He has a second research project with Microsoft, though, which he says could lead to practical benefits for the technology company.

“Essentially, the project aims to build a quantum computational model out of ‘gates’ that can be more easily implemented and scaled compared to other quantum computing paradigms,” Shokrian-Zini says.

“We are still at the very first steps of the theory part. We have to figure out if the model is universal, and then we’ll have to simplify it as much as possible to make it implementable. It has been mostly my coding and quantum-computing theoretical skills that have contributed to this project.”

A narrowing gap between theoretical physics and emerging technologies

Quantum tech is at a stage where it naturally brings basic research and business interests together. Venture capital firms have been pouring money into quantum start-ups, even as theoretical physicists work to understand the fundamental science. That opens up opportunities for people like postdoctoral researcher Michael Vasmer to establish a footing in both worlds.

“In my field of quantum error correction – as in quantum information more broadly – there is quite a large overlap between the interests of theoretical physicists and of industry,” he says. “From my perspective, this is because the central problem is the same: we want to try to build a fault-tolerant quantum computer.”

Vasmer works with a Toronto-based start-up called Xanadu, which is developing new computing technologies based on “photonic qubits,” a promising, adaptable means of storing and processing quantum information.

“The main difference is that in my work with Xanadu, we were concentrating on designing a quantum computing architecture based on a particular type of photonic qubit,” he says. “At Perimeter, I am more platform-agnostic, and more interested in abstract properties of quantum codes and fault-tolerant protocols.”

In addition to subject matter overlap, Vasmer says the culture at Xanadu is also somewhat familiar.

“To be honest, the office vibe at Perimeter reminds me of a start-up, which I guess might be intentional. They both have Friday socials, a ping-pong table, etc.,” he says.

The biggest adjustments involved the frequent meetings and aggressive deadlines that come with a private company. But, like Shokrian-Zini at Microsoft, Vasmer appreciates fast access to high-performing computing and other business resources.

Because the gap has narrowed between fundamental physics and tech businesses, many scientists see no pressing need to try to choose one over the other.

“I am quite happy at the moment straddling academia and industry,” Vasmer says. “Quantum computing is at a very exciting stage where the devices may soon be useful. I think industry is where this will happen first, so I definitely want to retain my involvement. More long term, I still would want to work in academia, but I am also considering stepping into the start-up world myself after my postdoc.”

“Since postdocs at PI have the ability to set their own research agenda, they also are forced to learn these skills,” he says. “It’s not always easy to find the balance between working on short-term objectives versus long-term research and planning, but I was able to get some practice while at Perimeter.”

“I am not entirely sure about the future. Having experienced both sides, I would say that even though pure physics and math projects can keep me happy, I would also like to have some projects that have application,” he says. “And if that is attached to some commercial venture or emerging industry, then even better!”