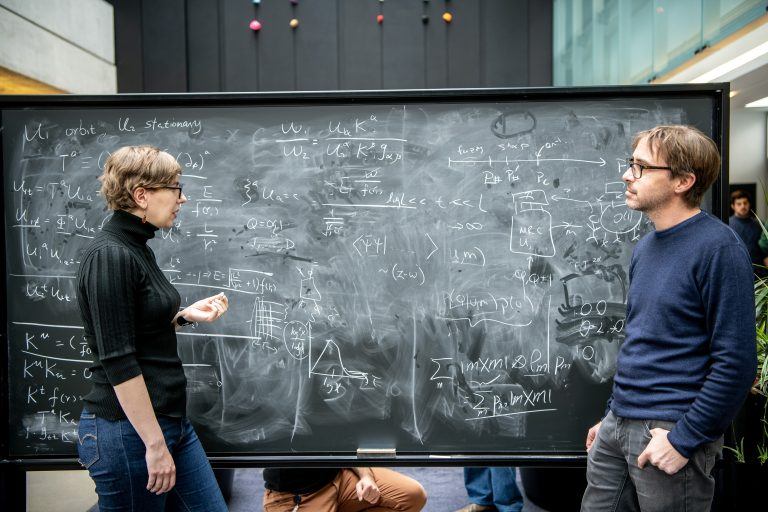 Duality is the incredible “two-in-one” combo of physics.

But research collaborations can be powerful dualities in themselves.

Paquette is a regular Visiting Fellow at Perimeter and was here for a research visit during the month of November.

The two scientists come from vastly different places and have different entry points into math and physics.

Costello is from Cork, Ireland. Paquette was raised in Utica, New York. Costello was captivated by mathematical puzzle games when he was a child. Paquette says math and physics weren’t really on her radar until she took a senior class in physics in high school and discovered she loved it.

But both ended up drawn to the entrancing power of mathematical physics, which they use to solve the puzzles of nature.

The mathematical physics duo is now putting a theory they have worked on in past years, known as twisted holography, together with a promising newer theory known as celestial holography.

They hope a beautiful marriage of these two remarkable ideas will be a step forward in the decades-long quest for a unified theory of quantum gravity.

Their paper, “Celestial holography meets twisted holography: 4d amplitudes from chiral correlators,” was published in October in the Journal of High Energy Physics.

As successful as they are in their own realms, these two theories simply don’t speak the same language. It is not easy to unite them, given that one theory is about a continuous, smooth spacetime and the other about discrete packets of energy.

The holographic duality has made the bridge-work easier by positing a hologram-like relationship connecting gravity in a negatively curved spacetime region called anti-de Sitter space to a conformal field theory, which describes particles on that region’s boundary.

“You can think of anti-de Sitter (AdS) space as being like a soup can, in the sense that if you’re a little person living in the middle of AdS and you fire some laser or some light rays from the middle, that light is going to reach the boundary of anti-de Sitter space in some finite time,” Paquette explains.

Maldacena described it as a “universe in a bottle.”

While that makes it easier to draw the connections between particles and gravity, the problem is we don’t live in a soup can, or a bottle.

Modern-day measurements lead cosmologists to conclude that the universe is approximately flat (possibly with a tiny amount of positive curvature). Unlike the curved soup can or bottle universe, a “flat” spacetime means Euclidean spatial geometry, where parallel lines always run parallel and never meet.

Ideally, scientists would like a model that is closer to the flatish spacetime we live in.

This newer theory replaces the bottle or the soup can with a celestial sphere, a concept that goes all the way back to the ancient Greeks, who looked up at the stars in the night sky and imagined an orb surrounding the Earth, with the stars projected on the inner wall of that orb.

In celestial holography, the boundary of the universe’s celestial sphere is infinitely far away, so the spacetime region inside it would look essentially flat.

The mathematics for this idea was initiated by Andrew Strominger and collaborators at Harvard University. Perimeter was lucky to snag Sabrina Pasterski from that collaboration to join the Institute’s research faculty. She founded the Celestial Holography Initiative in 2021 and, as the principal investigator, is leading a team of amplitudes, mathematical physics, and quantum gravity researchers in a concerted effort to tackle the problem of uniting our understanding of spacetime with quantum theory by encoding our universe as a hologram.

“About a year ago, Natalie and I started thinking that twisted holography is a way of thinking about celestial holography,” Costello says.

The idea of “twistor space” was put forward by Roger Penrose about 55 years ago, in 1967. In twistor theory, geometric points in space are replaced by twistors – entities that resemble stretched ray-like shapes. Space and time are knitted together where the twistors meet.

Penrose believed that twistor space would be a way toward a theory of quantum gravity, but it did not yield significant progress in that direction.

To this, Costello added holography, to produce what he and his collaborators, including Davide Gaiotto, Krembil Galileo Galilei Chair in Theoretical Physics at Perimeter, call “twisted holography.”

The supersymmetric equations are what make all this work. These equations can be used on this “geometric playground” to arrive at something “much more physical and applicable to the real world,” Paquette says.

“You can actually get pretty close to the spacetime you might be interested in studying,” Costello adds.

The research collaborations continue. More recently, Costello and Paquette collaborated with Atul Sharma from the University of Oxford on another paper, “Top-down holography in an asymptotically flat spacetime,” and that paper is currently in the preprint archives.

But the work with celestial holography that Costello and Paquette are doing is not just useful in the realm of understanding quantum gravity.

In December, Costello and Paquette’s paper, “On the associativity of one-loop corrections to the celestial OPE,” was published in Physical Review Letters, and that important paper has to do with the scattering of particles (i.e., scattering amplitudes), something that is relevant to experiments at the Large Hadron Collider.

In this work, the momentum of the particle is determined by a point on the celestial sphere, so it too is related to celestial holography. “For me, this is useful because I want to understand and compute scattering amplitudes,” Costello says.

Ultimately, this work will deepen our understanding of nature, in the realm of the very small as well as that of the cosmos.

“I really enjoy the feeling that I get when I get some hint about the formal structure of physics, whether it is in quantum gravity or quantum field theory,” Paquette says about why she loves mathematical physics.

“It’s nice when some math from seemingly out of left field comes in and provides a very beautiful and concise way of thinking about some computation.”