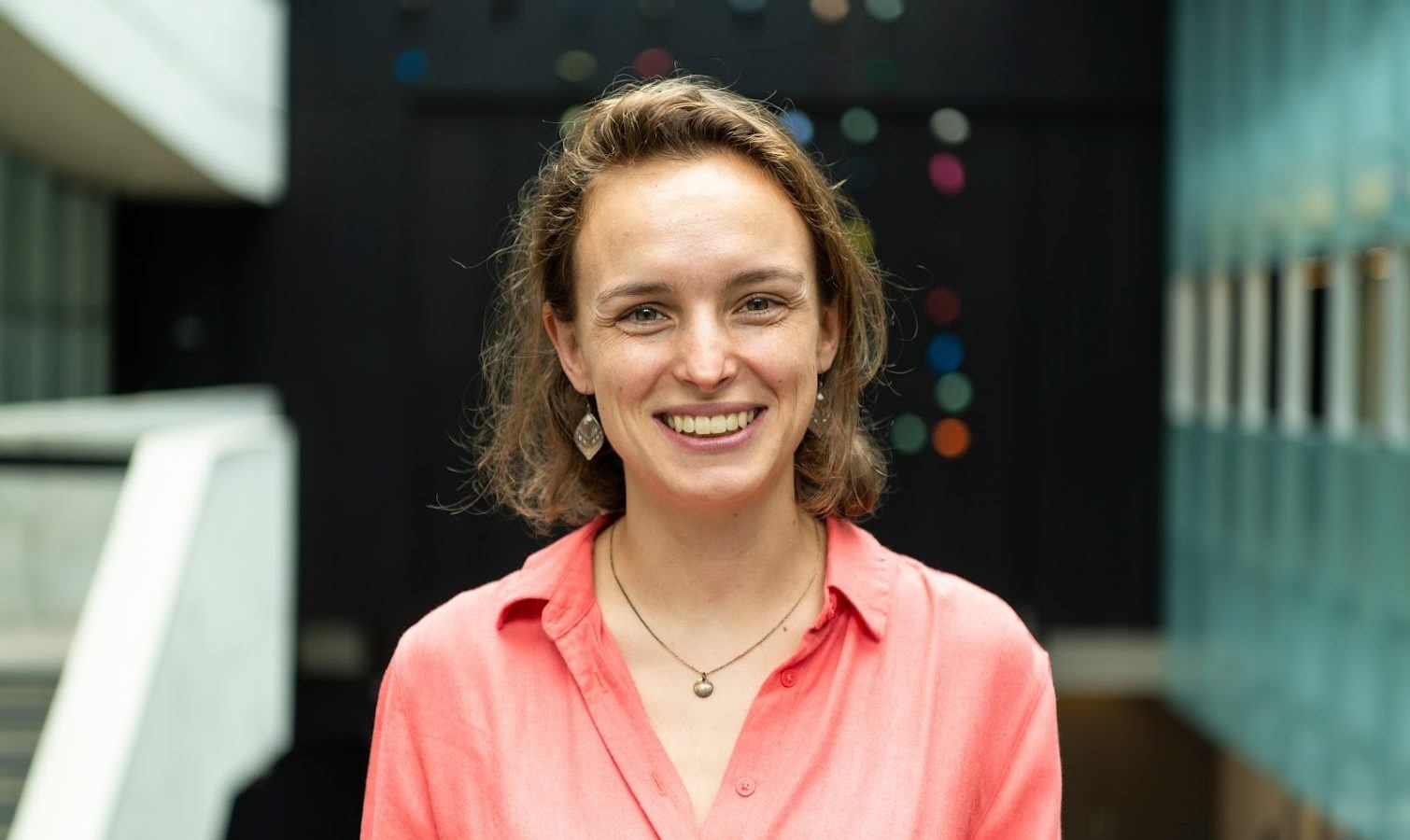 Béatrice Bonga once saw the infinite in person.

The way to comprehend the incredible scope and beauty of the universe, she says, is with physics. “You could write all of Einstein’s equations for general relativity on that chalkboard,” she says. “He wrote them down more than 100 years ago, and we’re still trying to unpack all the physics. And we’re going to be busy for a while. You can grasp with physics so much more than you can grasp with anything else.”

Those equations of Einstein’s have shown Béatrice Bonga wonderful things – things she never expected to be able to see. Take, for instance, gravitational waves.

Bonga is a postdoctoral fellow at Perimeter Institute who’s passionate about “all things general relativity.” Naturally, she knew about gravitational waves long before the LIGO collaboration stunned the physics world by actually detecting them a few years ago.

“I knew gravitational waves had to be there,” she remembers. “I knew about the indirect evidence. I knew I was working on a theory that was beautiful, that was true. But I didn’t think I’d actually get to see a gravitational wave. At best, I thought, maybe when I’m older and technology has advanced.”

She wasn’t the only doubter. “Half the community was thinking it was never going to happen, while the other half said ‘Well, maybe, but in 20 years or so.’ The LIGO community itself was optimistic, but meanwhile my teachers were saying: ‘The precision they will need is absurd, I’m not putting any money on that.’”

But LIGO pulled it off, managing to detect a passing gravitational wave by the way it changed the length of a four-kilometre-long observing arm by a tiny fraction of the width of a single proton. The observation was made in September 2015 but not announced until March 2016.

Bonga was in her doctoral program at Penn State at the time, doing theoretical work in the same department as some of the LIGO scientists. “The day they made the first detection they showed up for our seminar. They were sitting in the back of the room giggling and chatting.”

The LIGO scientists she worked beside didn’t provide any spoilers, but on the day of the announcement, they burst into what Bonga calls “a crazy big party”.

To be that close to a discovery of such a magnitude was astonishing. But then, Bonga’s entire experience of physics has been driven by wonder.

Her subfield, general relativity, drew her in because she loved “how the physics and geometry play hand in hand,” she says. “The mathematics is beautiful, and the ideas – many are so simple you can understand them with pictures.” But at the same time, the young researcher says, “I love the way GR challenges you to think about concepts that you’re used to in a revolutionary way.” For instance, general relativity turns familiar time into the malleable spacetime, where clocks tick slower in a strong gravitational field. “These things sound like sci-fi, but they’re real. We’ve measured them. I love how this field keeps changing our perspectives.”

Bonga feels lucky in her personal timing, too. “I was in this game before the gravitational-wave detection happened. And then suddenly I found I picked a hot field,” she says.

The influx of ideas, energy, and urgency has changed her own research direction a bit, and she’s now involved in doing calculations that will one day be useful to the next-generation gravitational-wave detector, LISA, or Laser Interferometer Space Antenna, a trio of spacecraft set to launch sometime in the 2030s by the European Space Agency. LISA will observe gravitational waves at different frequencies than LIGO, and will therefore see different things. One of its prime targets is supermassive black holes, such as the one at the centre of our galaxy. These very large black holes may well be orbited by smaller black holes. The orbit of the smaller black hole should, in principle, create gravitational waves, which LISA could detect.

But Bonga thought she spotted a hitch. Usually, she says, the model for what that kind of gravitational wave should look like assumes that only the supermassive black hole and the orbiting smaller black hole matter. But in fact, the centre of the galaxy is a crowded place. “The closer you get to the centre of the galaxy, the harder it is to make observations,” notes Bonga. “We don’t even really know the distribution of stars there. But it’s unlikely that it’s a big black hole, a small black hole, and nothing else.”

She decided to see what would happen if there were a third black hole somewhere nearby. With Perimeter Faculty member Huan Yang and MIT’s Scott Hughes, she discovered that a third black hole can throw a wrench into the works. “Typically, its effect would be small – but we show it’s not small all the time,” she says. Their research uncovered resonances in the system. “When you get a resonance effect, it gives the system an unexpectedly big kick, and it can change the orbit of the small black hole.”

It’s a surprise, and an important one. “The orbit determines how the gravitational wave looks,” Bonga says. “We need to have very accurate models for LISA to make sense of the data.” What’s more, she says, “if you could detect those shifts well enough, you could do the inverse problem – you could learn about the stars around the black hole. It’s hard to get that information from any other observation.”

It’s another unexpected window on the universe,  thrown open by equations and imagination.

The power of physics isn’t lost on Bonga.  “I talk about a neutron star or black hole like it’s nothing, but they probably aren’t something you can grasp with your mind, and definitely not something we can experiment with on Earth. Yet somehow with physics we can understand them.”

And she is eager to share that vision with others. As one of the scientists volunteering with Perimeter’s Educational Outreach team, she has appeared in some of Perimeter’s classroom resource videos, and has interacted with visiting high school students and public lecture goers.

“About half the time, they have questions about science, and the other half are questions about a day in the life of a scientist,” she says. “People are intensely curious about what we really do – and what we get to do is amazing, so I am happy to share.”