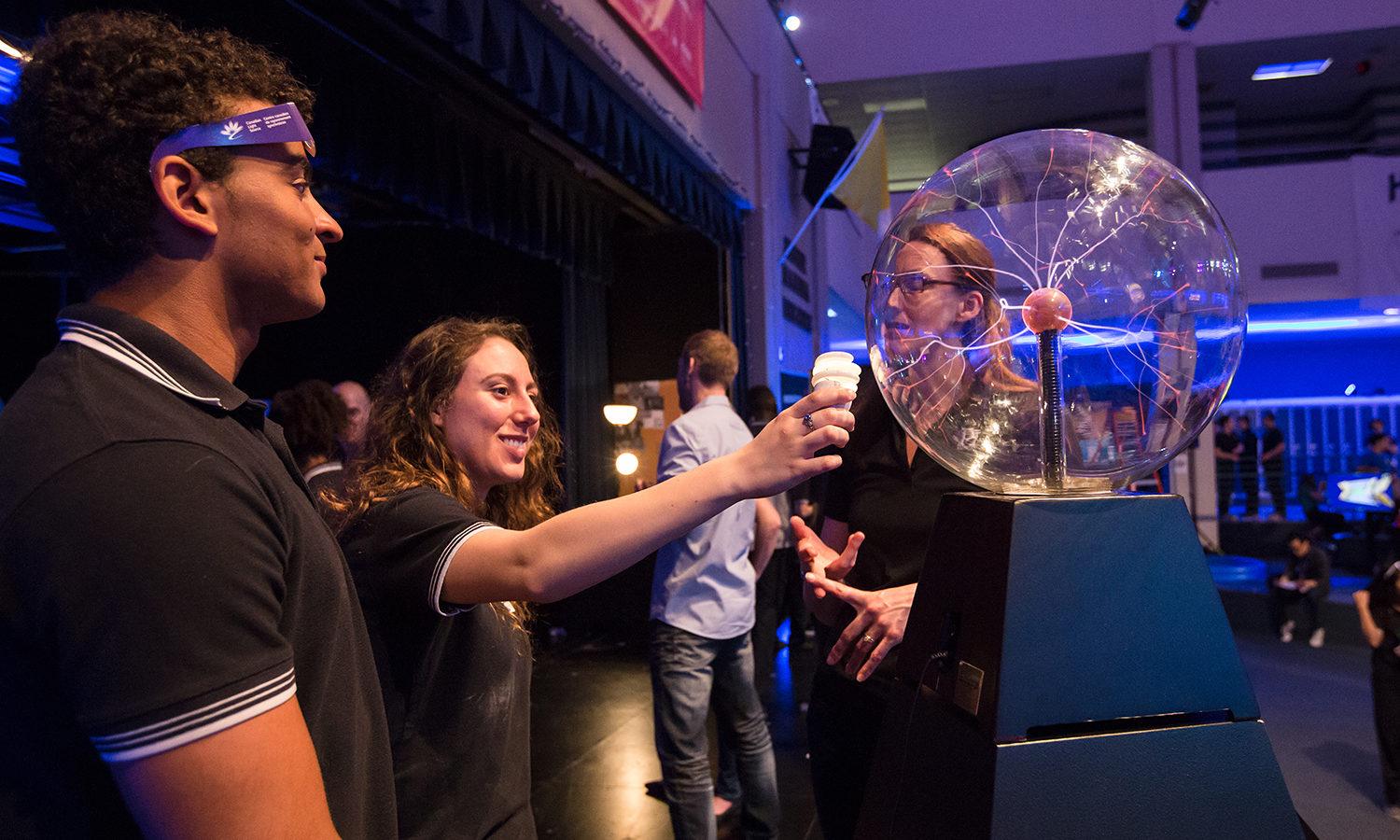 Somewhere between the virtual reality booth and the levitating train, amid the blasting lasers and the flying water balloons, a man lay his arm on a bed of nails, placed a brick on his forearm, and then smashed a hammer down on top of it all.

This was no strange carnival. Rather, this was just one moment in the pop-up science expo that overtook Cathedral High School in inner-city Hamilton, Ontario, in late May.

Usually students have to take a field trip to visit a science centre or research facility. Instead, the winners of the Innovation150 “In Every Class” contest had a dozen of Canada’s top science organizations come to them, bringing with them hands-on demos, experiments, and cutting-edge exhibits.

Cathedral science department head Kristina Salciccioli was the driving force behind the school’s contest entry. To win, they needed to not only make a great video entry; they also needed online votes. “I said to the students, ‘Look, Cathedral – we get behind our sports teams, and this is a day we’re going to get behind our science program,’” she recounted. “The kids really got behind it. We’ve got great school spirit here.”

While Perimeter’s Outreach team demonstrated Newton’s laws with busker-like demonstrations, pulling a table cloth out from a set table and the aforementioned bed-of-nails trick that smashes a brick without hurting your arm, Canadian Light Source created a “light waterfall” that bends lasers, the Institute for Quantum Computing at the University of Waterloo brought a levitating superconducting train, the Canada Science and Technology Museums Corporation booth featured a Bernoulli air cannon, and a mini-IMAX experience from the Ontario Planetarium took students on a journey through the universe.

Grade 10 student Omer Niaz Muhammad said the expo inspired him to pursue science. “I don’t know how to explain it, but it’s crazy, it’s majestic,” said Niaz of the exhibits. “Next year, I want to pick some more science classes to learn more about it.”

Samantha Kuula, SNOLAB’s Communications Officer, says science organizations like SNOLAB have a responsibility to share their science, particularly with youth. “If we can’t bring them to us, because we’re in Sudbury, we need to come to them and be that inspiration and get these kids engaged early on in the STEM fields,” she said.

One way to do that is to put the inspiration, quite literally, in their hands: one of the most popular activities of the day was taking a photo holding Arthur B. McDonald’s Nobel Prize medal, which he shared in 2015 for the discovery that neutrinos oscillate between different types and that they have mass.

Hamilton Mayor Fred Eisenberger dropped by to chat with students and explore the experiments. “It’s a great demonstration of science and the importance of science,” he said. “There are great lessons to be learned here.” And, he added, “It’s just so very cool.”

Standing with her classmates in a circle around a small inflatable pool, Grade 12 student Julianna Boros tossed water balloons from different heights as outreach scientists from TRIUMF explained the inner workings of particle accelerators.

Activities like this brought science to life for Boros, whose interests typically tend more toward foreign languages than science. “I really liked how interactive it was, that we actually got to be part of the experiments,” she said.

Fellow Grade 12 student Nicole Graziano shared similar sentiments. Graziano, whose favourite subject is drama, even plans to replicate some of the experiments at home. “Being here made me regret not taking science all four years,” Graziano said. “I hated science in class. If it was modelled off this – more hands-on – I think it would be a lot better.”

Cathedral’s student population draws from a diverse cross-section of Canadians. “This neighbourhood is the poorest urban core in Canada,” said Salciccioli. “We are also the beginning point for so many new Canadians. We’ve got kids who have come from places where they’ve never been to school, or who’ve had interrupted school, so coming to school is a big deal. There’s great desire to learn.”

For many of the students, the expo marked their first exposure to any kind of science exhibition. Only a tiny fraction of the students in Salciccioli’s Grade 10 class, for example, had been to nearby science centres or museums.

“It’s worthwhile for these types of things to happen, because not a lot of people can have the access to go to a science centre, and experience what it’s like,” said Sophia Lim, a Grade 12 student. “You never know who wants to be a scientist. And these things like this, they might create future scientists.”

The Cathedral expo was a one-time event for the winners of the contest, but the Innovation150 Power of Ideas tour continues its cross-Canada trek throughout 2017. Stay up to date with the tour at Innovation150.ca/tour.