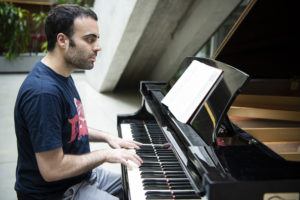 For the first two decades of his life, Barak Shoshany was sure he would become a professional musician.

Yet he always felt that something was missing.

While music fulfilled his artistic and emotional side, he was also immensely curious about the universe.

“Throughout my childhood and teenage years I read every popular science book I could get my hands on, particularly about physics and math,” he recalls. “For a time, this was enough to satisfy my curiosity, but eventually, when I was 22, I realized that if I truly wanted to have a shot at grasping how the universe really works, I had to become a scientist myself.”

He couldn’t have predicted how his childhood passions would later become intertwined.

Shoshany went to Tel Aviv University to study mathematics and physics, and spent his summers doing research at CERN’s Large Hadron Collider in Switzerland and at Weizmann Institute in Israel. When it came time to pursue a master’s degree, he chose the intense Perimeter Scholars International program.

He remained at Perimeter to pursue his PhD with faculty member Laurent Freidel, tackling a quandary he knows full well may not be solved in his lifetime: the quest for a theory of quantum gravity.

What is quantum gravity?

Physicists use two extremely precise and well-tested theories to describe the universe: quantum mechanics and general relativity. These two theories differ from each other in almost every possible way: mathematically, physically, conceptually, and even philosophically.

“Usually that’s not a problem,” explains Shoshany, “since quantum mechanics generally applies to very small things, like elementary particles and atoms, while general relativity usually applies to very big things, like stars and galaxies. Therefore, in most cases it’s enough to use just one of the theories – and, if needed, employ some elements of the other theory in approximate form.”

However, certain extreme situations, such as the interior of black holes or shortly after the big bang, require the full implementation of both theories at once in order to understand them. In these scenarios, where approximations are no longer possible, nobody knows what happens. “The term ‘quantum gravity’ represents a currently unknown theory that might someday be able to tell us what’s going on,” says Shoshany.

“The most we have at the moment are some speculative ideas, but no complete theory, and definitely not anything close to a scientific theory that can be tested experimentally.”

General relativity describes gravity as a consequence of the curvature of spacetime. Hence, following that logic, in a theory of quantum gravity one might expect spacetime itself to be made of discrete fundamental elements.

Shoshany’s PhD research is focused on a theory called loop quantum gravity. One of loop quantum gravity’s most celebrated results is its prediction that spacetime is indeed fundamentally discrete at the quantum level. Space appears smooth and continuous to us only because this discreteness is at extremely small distance scales, many orders of magnitude smaller than even atoms.

Much like a digital photo, which turns into discrete pixels when you zoom in, loop quantum gravity predicts that, if you zoom in close enough on spacetime, you’ll see the discrete quantum building blocks of spacetime itself.

In his PhD thesis, Shoshany is trying to understand the nature of this quantum spacetime and how it relates to the usual, classical spacetime described by general relativity. This is where the loops come in. It turns out that, in order to describe the geometry of a space, you only need to know how a vector changes when it goes around loops in that space, following the bends and curves as it goes.

“This is where the name loop quantum gravity comes from,” says Shoshany. “In this theory, we define a graph on spacetime – a set of nodes connected by a network of links. Along these links we can take various loops, and they tell us about the curvature. Since gravity is just spacetime curvature, quantizing these graphs – which are called spin networks – is equivalent to quantizing gravity itself.”

Shoshany is quick to point out that no one knows if loop quantum gravity is the correct theory of quantum gravity: “I cannot claim with any kind of certainty that the research I’m doing has any relevance to the real universe.”

But this, he adds, is the essence of research in theoretical physics. Researchers develop speculative theories at the mathematical level until those theories are consistent enough to be tested through experiment.

“Some theories hit a dead end,” Shoshany says, “but a few could revolutionize science.”

Mentoring the next generation of scientists

Shoshany’s passion for mathematics and physics was not something he could keep to himself for long. In addition to serving as a teaching assistant for courses in the Perimeter Scholars International program – the very courses he attended as a student in that program – he has volunteered to participate in Perimeter’s many teaching and outreach activities. When audiences arrive for Perimeter’s monthly public lectures, Shoshany can usually be spotted answering questions and discussing recent discoveries in physics.

For the past five summers, Shoshany has taught in the International Summer School for Young Physicists (or ISSYP), a two-week camp at Perimeter that gives exceptional high-school students from around the world a deep dive into theoretical physics. “As a teacher, there’s no better experience than having students who are truly enthusiastic about what they are learning – and every year, without fail, the ISSYP students prove to be exactly that. I’m actually sad that I’m graduating and leaving Perimeter in a few months, because it means I will most likely not be able to teach at ISSYP again.”

Shoshany also participated in Perimeter’s new undergraduate summer program, where he taught a course on faster-than-light travel, time travel, and violations of causality in general relativity. “Time travel may sound like science fiction, but it is a small but active field of research in the general relativity community,” says Shoshany. “Teaching the subject, as well as supervising a pair of undergraduate students in related research projects throughout the summer, has been a challenging experience – but also extremely fun and rewarding.”

Music in the mathematics

As it turns out, the path Shoshany chose at 22 did not end his relationship with music. In some unexpected ways, his research and music have proven to be symbiotic.

“Whenever I get stuck on a seemingly impossible problem in my research, I find solace in playing or composing music,” he says. “Conversely, my work on loop quantum gravity has sparked my creativity and inspired me to write an orchestral piece called ‘Music at the Planck Scale.’”

The Planck scale is the very small distance scale where the discrete elements of quantum spacetime in loop quantum gravity are thought to exist. Shoshany was delighted when Perimeter Institute’s orchestra – made up of researchers, students, and staff – agreed to play the piece during a performance in Perimeter’s Mike Lazaridis Theatre of Ideas. Shoshany wielded the conductor’s baton.

“Standing onstage, music swelling as I conducted the live performance of my piece, was one of the highlights of my five years at Perimeter,” he recalls. “It felt as if my life was coming full circle – or, rather, in a loop.”