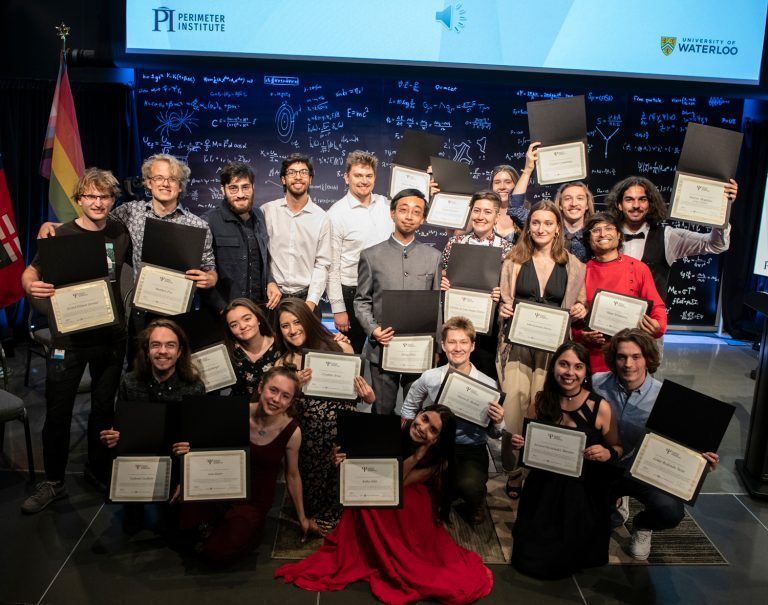 There’s a unique satisfaction in completing something challenging, especially when it is done with friends. The PSI master’s program checks both boxes. And if you ask the 2022 graduating class, they will tell you that over the last year, they’ve forged bonds that they will carry with them for years to come. What’s more, they’ve done so while grappling with some of the most complex scientific challenges in human understanding.

“They’ve gone from students to scientists,” said Perimeter Director Robert Myers, as he opened the ceremony. “They’ve taken deep dives into cosmology, particle physics, string theory, and quantum information. They’ve pushed themselves and supported each other.”

“And I hope it was really hard,” said David Hawthorn, the Associate Chair, Graduate Studies, at the University of Waterloo, prompting knowing laughter from the graduates. “I hope it was hard for all the right reasons. I hope it was challenging, I hope it pushed your limits and pushed the boundaries of what you’re able to accomplish.… If it was easy, it wouldn’t be worth your time.” 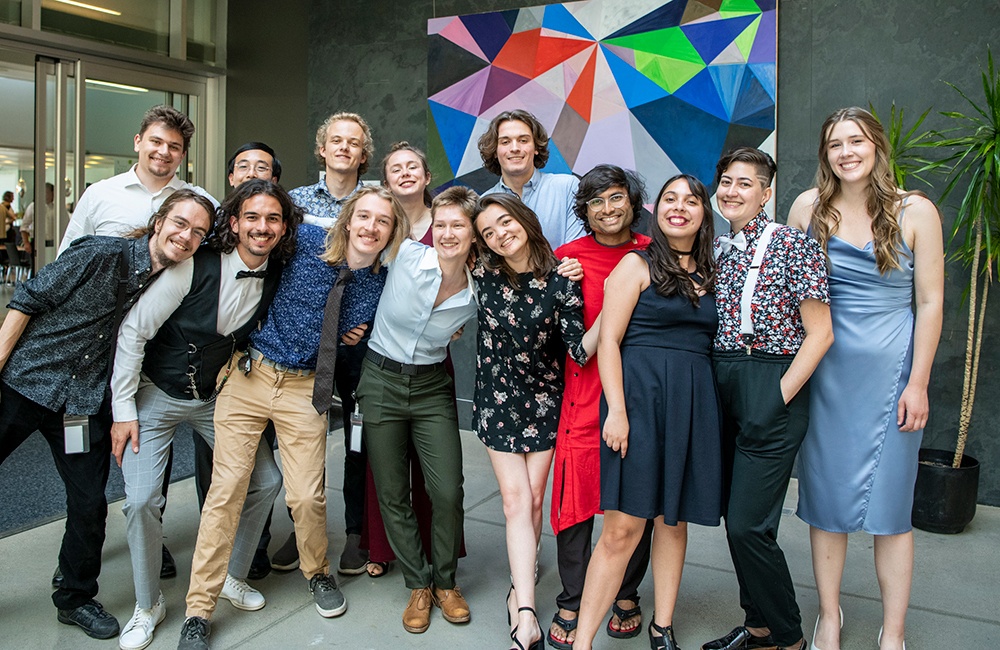 By all accounts, the PSI master’s program can be intense. It attracts top students from around the world and introduces them to the complexities of theoretical physics, first through a series of core classes, followed by more directed elective classes that take them to the edges of current understanding. Finally, the students spend two months working with Perimeter faculty to produce a research essay, which they defend in front of their peers and mentors at the end of term. Having earned their PSI certificates, the students will receive their MSc degrees from the University of Waterloo at a convocation ceremony this fall.

It’s a challenging but energizing environment in which to learn. One PSI graduate, Sofia Gonzalez Garcia, described how the chance to directly work with the faculty, postdocs, and PhD students at Perimeter made the program uniquely valuable. “They’re the ones revolutionizing science,” she said. “And at least for me personally, it’s really changed the way I see and interact with academia.”

Zheng Zhou, a PSI graduate who is staying at Perimeter to pursue a PhD, echoed Garcia’s sentiments.

“What I found the most valuable is the collaborative environment,” he said. “In my recent work, I saw some exotic results, which me and my advisor both didn’t know how to interpret. So he took me all around the building, and tried to knock at the door of everyone who we thought might have some insight into this problem. And everyone was very willing to talk with us and give us a lot of insights about our problem.”

Among all the hard work, the PSI program also gives students the chance to build a community. From talent shows to weekend camping trips (where some of this year’s class encountered a bear!), the graduates developed a sense of togetherness.

For many of the graduates, the week-long “Winter School” was the highlight of the year, where they spent their mornings working in small groups on difficult problems, and then took the afternoon off to get outside. For an international class composed of 21 students from 12 countries, this was the first chance for many of the students to experience Canadian winter activities like skiing, skating, or snowshoeing.

The diversity of the PSI program is one of its greatest strengths, says Caroline De Lima Vargas Simões, one of this year’s graduates.

“I remember one of my friends coming to my place once and we stayed discussing to 2 am about the number of vowels in words in different languages. This kind of interaction I don’t think I would have ever had in my life if I hadn’t come here.”

Manu Srivastava similarly valued the program’s diversity, remembering fondly a holiday dinner where each student cooked a dish from their home country, resulting in a wonderfully unique and tasty meal shared among friends.

Srivastava gave a moving speech at the ceremony, describing the newfound relationships forged over the course of the program.

“I knew that academically research-wise PSI was going to be a great experience. I knew I was going to learn a lot and maybe mature a little as a researcher. And all that has definitely been true. But what I had not expected was to find a family here,” said Srivastava.

“It’s not trivial to get that kind of closeness.… Now I have close bonds with people from Spain, from Ecuador, from China, from the US. It’s just amazing to have such diversity and still such community feeling.”

Srivastava went on to praise Perimeter for enabling big-picture thinking without pressuring researchers to find immediate applicability in business or technology, trusting that new insights will be valuable on longer time scales. “This kind of blue-sky research, this thing Perimeter is doing, is extremely important I think, in the long term,” he concluded.

The ceremony also marked the retirement of someone special. Debbie Guenther, Perimeter’s Academic Programs Manager, has mentored every single PSI class since the beginning of the program 13 years ago, and it is clear from both her colleagues and the students that she has made a lasting impression. Throughout the ceremony, Guenther garnered not one but several standing ovations.

“You’ve been so amazing and important for so many generations of PSI students,” Garcia told Guenther. “It’s really hard to imagine this program without you, but we really wish you have an amazing and well-earned retirement.”

This year’s ceremony contained double the pomp, as many of the 2021 graduating class returned to celebrate their own successful completion of the program. With the COVID-19 pandemic in full swing last year, the 2021 class studied and collaborated virtually for much of their master’s program, missing the opportunity for an in-person graduation. That opportunity was reclaimed this year.

Taillte May, who was part of the class of 2021 and is now doing her PhD at Perimeter, rejoiced at the chance to meet her cohort face to face. “[PSI] is famously this really intense program, and we all did it at home in our bedrooms. So I’m really proud of us for getting through it. And also, it’s really great to see everyone now and we’re all doing so well,” she said.

It is the end of a journey for all the PSI graduates, but it’s just the beginning for their careers and their friendships. As Srivastava put it so eloquently in a closing goodbye to his peers, “I’m sure whenever we meet again, this feeling of togetherness, this feeling of closeness that we share will be rekindled again, perhaps with even greater intensity. And I’ll surely and eagerly be waiting for that time. But until then, let’s go out in the world and be the best versions of ourselves. The versions that we as a family could be proud of. Let’s go out there, prove our mettle in whatever we pursue, and show the world that we have what it takes to do the incredible.”