Claudia de Rham has a peculiar relationship with gravity. She studies it. She is fascinated by it. And she spends much of her free time trying to defy it.

When she’s not brainstorming with colleagues at a blackboard or a computer puzzling over some complex aspect of gravity, she is often escaping its pull in the cockpit of a rented airplane, or exploring coral reefs with a scuba tank on her back, suspended weightlessly in seawater.

“It’s all part of exploring,” says de Rham, whose scientific explorations regularly carry her to Perimeter Institute for research visits. “To fly or to scuba dive, you see yourself in a completely different orientation. It changes your perspective because you can defy gravity in some sense.”

A faculty member at Imperial College London, de Rham grapples with deep questions at the intersections of particle physics, gravity, and cosmology, ultimately “trying to understand what the universe is made of, to get closer and closer to a more fundamental description of nature.”

That’s an ambitious goal – sleuthing out a solution to how the universe really works – but the audacity of the venture is a big part of its allure, she says. “If there’s something we don’t understand, or some discrepancy in the data, that’s a sign – a sign that there is something more for us to learn,” she says. “It’s a sign that we’re on the edge of discovering something new.”

She has already made important discoveries, particularly in the field of massive gravity, of which she is a pioneer. She led research that showed the particle carrying gravitational force, the graviton, could be massive, which has major implications for the so-called “cosmological constant problem” regarding the accelerated expansion of the universe.

Her research has earned her a bevy of prestigious awards – including this year the Adams Prize and the Blavatnik Award for Young Scientists – but while she appreciates the recognition, she’s more interested in questions than kudos.

Where dreams are born

She traces that insatiable curiosity about the universe to the years her Swiss family lived in Madagascar, where she lay on her back countless nights, gazing at the stars overhead. The view was so majestic, so undimmed by haze or light pollution, that the denseness of the Milky Way looked like strips of gauze stretched across the sky. “It was part of my everyday life to see the stars,” she says. “When you look up, look at the deep, deep sky, it makes you dream big.”

Her dreams and ambitions carried her through physics studies in France, Switzerland, the UK, and eventually Canada, where she accepted a postdoctoral position at Perimeter Institute in 2006. It was during her time at Perimeter that she nurtured her passion for flying, earning her pilot’s license at the local airport and taking to the skies.

On many occasions, when a particular problem in gravity seemed too tough to crack, she changed her perspective by renting an airplane at the Waterloo Region airport. Sometimes she’d fly directly over Perimeter Institute, as if to nudge her subconscious mind into seeking different pathways to the problems she had wrestled far below.

“I would have all these ideas in my mind, all these problems, but when you fly you have to focus on something very different,” she says. “It clears your mind, and all these new connections get created, and you come up with new ideas.”

De Rham has returned to Perimeter Institute regularly since she left in 2009, to flesh out new ideas in collaboration with peers, freed from the typical administrative responsibilities of her home institution. She is currently examining the behaviour of gravity coming from pairs of neutron stars spiralling around one another toward an eventual cataclysmic collision. It is research made possible by the landmark 2015 detection of gravitational waves, which de Rham describes as “the most important detection” of her lifetime. 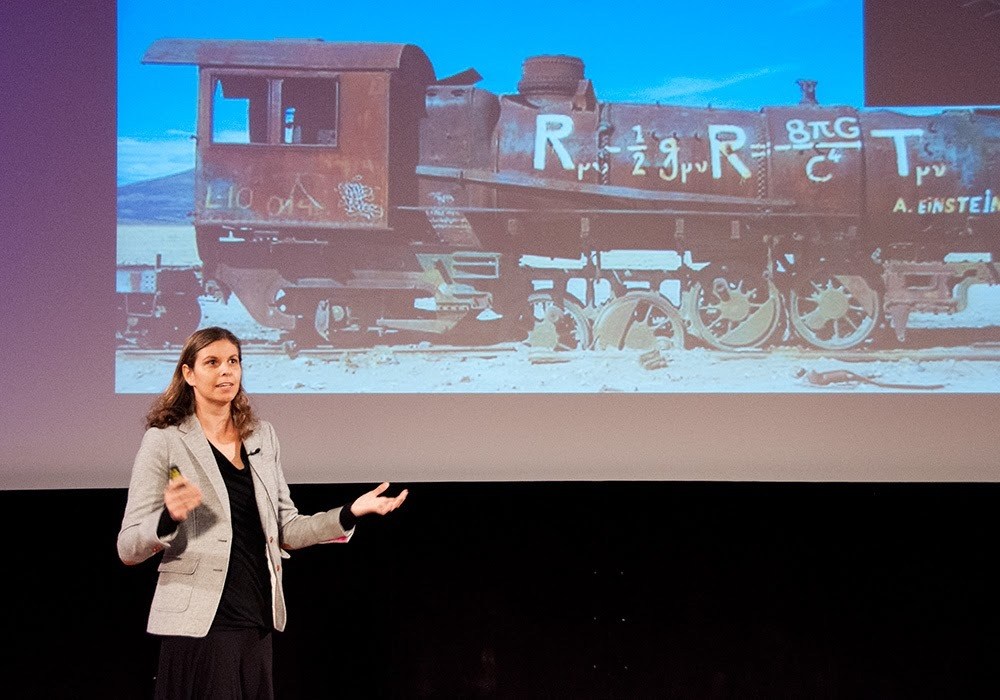 In 2013, de Rham was among the inaugural group of Perimeter’s Emmy Noether Visiting Fellows, a program that supports women physicists at critical stages of their careers. For de Rham, then a new mother of one, the Fellowship offered more than just financial support, providing new collaboration opportunities and much-appreciated help, such as sorting out daycare logistics so she could focus on vexing questions about gravity and general relativity.

The namesake of the fellowships, Emmy Noether, should be “a role model for women and men in physics,” says de Rham, who has since had two more children.

The late German mathematician refused to let the many obstacles in her path – she was a Jewish German woman in the early 20th century – impede her pursuit of knowledge. “It’s important that there is not just one picture of what a successful physicist looks like,” says de Rham. “Kids see a picture of Einstein and think that’s what a physicist looks like, but that’s not the full picture at all. There are so many different ways one can contribute to science.”

Success to de Rham means finding fulfilment in the journey, whether it’s a theoretical journey into the mathematics of gravity, or a jaunt above the clouds or beneath the ocean’s surface.

“It is an amazing time to be a cosmologist right now,” she says. “It feels like we’re really on the forefront of big things. It’s very, very motivating.”