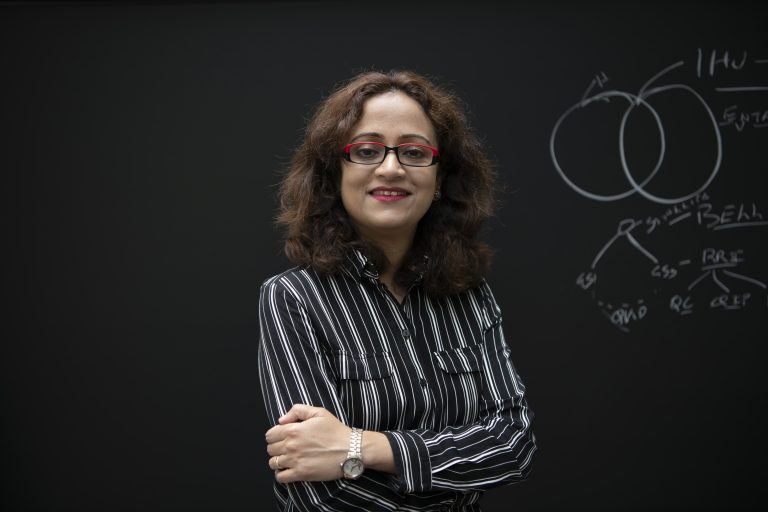 For Urbasi Sinha, the power of physics can be found in the cross-current of theory and experiment.

She began in the practical world of experiment, studying superconducting devices as a graduate student at the University of Cambridge.

Sinha credits Raymond Laflamme, an associate faculty member at Perimeter and the founding Director at the Institute for Quantum Computing (IQC) at the University of Waterloo, for drawing her toward the cutting-edge possibilities in quantum computing, quantum communications, and quantum optics. “He is one of those people who can really inspire you without much effort,” she says.

As a postdoctoral researcher at IQC, she led a “triple slit” variation on the famous “double slit” experiment to test the Born rule, one of the fundamental axioms of quantum mechanics. The celebrated results provided the most rigorous empirical validation of this rule to date.

Meanwhile, as she was working at the IQC, her husband Aninda Sinha was a postdoctoral researcher at Perimeter Institute, working with theoretical ideas about how gravity might emerge in the cosmos. Their conversations often were – and continue to be – about the intersection of theory and experiment.

But her lab also uses experiment to probe fundamental features of quantum physics and their theoretical foundations.

This architecture for testing the Leggett-Garg inequalities with single photons could also be used in other experiments that test other systems, including those with larger mass objects. Thus, it could provide a more high-fidelity way of testing macrorealism, the idea that in our everyday world, large objects do not behave in a weird quantum mechanical manner.

While we intuitively think macrorealism is true (e.g., the moon is there whether you are looking at it or not), scientific proof is not easy. Sinha’s lab is providing an architecture that helps close loopholes in those theories.

But it can also be used in developing practical applications in which single photons are ubiquitous workhorses, such as in quantum communication and quantum information processing.

Although she is busy running the lab in India, Sinha retains strong ties to Canada. She is an associate faculty member at IQC and at the Centre for Quantum Information and Quantum Control at the University of Toronto. She has collaborators at both the University of Calgary and Perimeter.

One of her collaborators at Perimeter is Rafael Sorkin, a research associate, who was a co-author with Sinha on the paper that used the triple slit experiment to test the Born rule. Back in 1994, Sorkin proposed an experiment motivated by the “sum over histories” approach to quantum mechanics, now known as the Sorkin test, which was implemented in the lab.

Earlier this year, Sinha’s team revisited Sorkin’s test of the Born rule, as well as the Peres test, named after the late Israeli scientist Asher Peres. The Peres test checks the correctness of the superposition principle, which describes how the wavelike properties of particles like electrons and photons can be superposed and represented as a sum of two or more distinct states.

Most recently, in 2022, Sinha returned to Waterloo and Perimeter as a Simons Emmy Noether Fellow.

“For me, this is a great program. It is a unique opportunity for me as an experimentalist to interact with top theoretical minds in my field and think of ways to provide practical significance to often abstract theoretical ideas,” Sinha says of the fellowship program.

“My lab in India has participated in many such successful collaborations in the past and present, including collaborations with current Perimeter faculty. This fellowship is a means of providing further impetus towards more such revolutionary practical realizations.”

She spoke about her work in photonic quantum science and technologies and building a global quantum internet at a recent colloquium at Perimeter.

“The idea is to use the laws of quantum mechanics to make communications secure,” she says. “We are working on a project in collaboration with the Indian Space Research Organisation to conduct quantum experiments using satellite technology.”

Sinha is also doing experiments in quantum computing, which uses a property of quantum mechanics known as superposition.

Superposition is the ability of quantum particles such as photons to be in more than one state (for example, spin up and spin down) and to therefore be represented as qubits of both zero and one at the same time. By harnessing this property, quantum computers perform certain computing tasks far more powerfully than regular computers that use electronic bits.

A major challenge for quantum computing is finding a way to increase the number of controllable qubits without destroying their superposition. The more qubits that are interacting with one another, the harder it is to maintain the coherence of the superposition.

Quantum computer scientists often implement various software solutions to boost the number of qubits without losing the coherence. But Sinha is experimenting with an alternative.

Her lab is working on generating higher-dimensional systems, such as three-dimensional “qutrits,” which are in a superposition of three states instead of the superposition of two states in qubits. The idea is that if one could create particles with more superimposed particle states than qubits, a smaller number of particles could be used to execute quantum computing tasks.

Her experiments in this area also use a version of the triple slit experiment that she used to test the Born rule when she was a postdoc in Waterloo years ago, adapting the experiment to generate and use entangled qutrits for various applications. She described this experiment in a recent Scientific American article.

Sinha says that each collaboration at the intersection of experimental and theoretical physics is a virtuous circle, with each element reinforcing and strengthening the other. She still collaborates with her theorist husband Aninda. Sometimes, they even co-supervise students.

“All these applications that we are working on in the lab depend on fundamental aspects of the subject that can fill something like 10 chapters of a quantum mechanics book. The applications and the fundamentals go hand in hand,” Sinha says, noting the importance of the Simons Emmy Noether Fellowship in developing more of the collaborations with theorists that are crucial to her work.

“My lab at the Raman Research Institute has carved a niche in the balance between fundamental research and applied technologies. Discussing the work with theorists at Perimeter will provide further impetus to our research goals. I am looking at another visit in the coming year under this fellowship.” 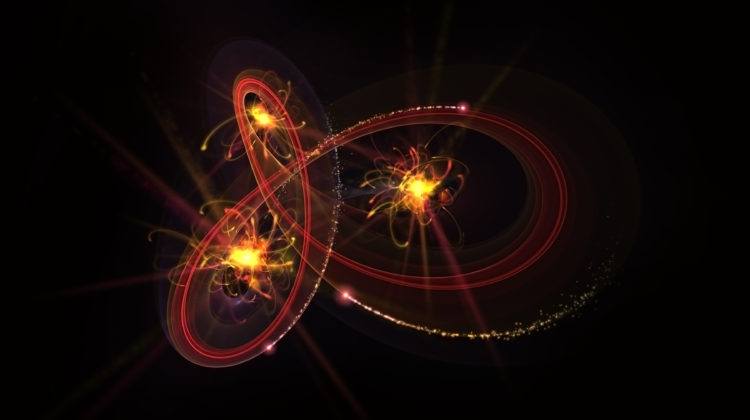