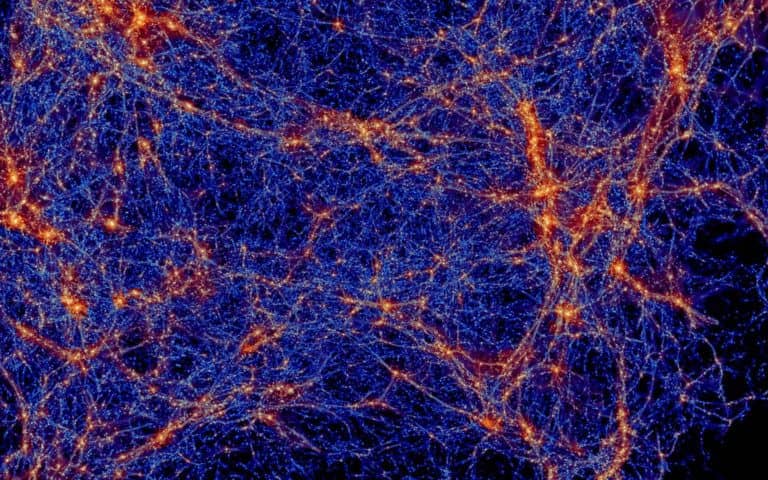 Dark matter is some of the most abundant, yet most elusive, stuff in the universe.

Though scientists are confident it is out there (thanks to the gravitational effects it has on its surroundings), the search to identify it has thus far come up empty.

As its name implies, dark matter neither emits nor absorbs light – nor any other electromagnetic radiation that present-day telescopes can detect. But perhaps looking for dark matter isn’t the only way to find it. Perhaps we can, in a sense, listen. 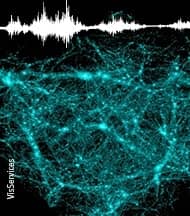 Research by Arvanitaki and collaborators, published recently in Physical Review Letters, explores whether dark matter could be a type of wave that resonates, like a guitar string, at a frequency within the range of human hearing.

“It would be a very boring, monotonous tone,” Arvanitaki explains. She demonstrates with a baritone “Oooooo.”

Arvanitaki is not suggesting we could merely hear the hidden matter of the universe humming away on an otherwise quiet night. Rather, she and her collaborators have explored the possibility that dark matter might take the form of a wave that resonates in the kilohertz range – the frequency audible to us.

It’s also possible that the wave could resonate at higher or lower frequencies, such as those audible to dogs or elephants, or not audible to any known ears.

The idea behind the “sound” of dark matter is one that can be tested with existing experimental apparatus at low cost, and could yield illuminating insights into one of the universe’s most profound puzzles.

To explore this idea requires reimagining dark matter not as a particle – the most common conception of it – but as a wave. Or a bit of both.

If you pack enough particles – bosons, to be exact – into a given space, they will overlap one another and begin to behave like a classical wave. If you posit a dark matter wave, its amplitude (the distance between its peaks and troughs) is set by the dark matter’s density, and its frequency (the number of peaks over a given time) is set by its mass.

The question then becomes how to detect it. Waves come in a huge variety of sizes, from low-frequency radio waves the length of a football field to gamma rays with frequencies the width of atoms. Dark matter waves could conceivably have a frequency anywhere along this enormous spectrum, since we don’t know its mass.

There’s also the possibility that dark matter is not detectable at all, since the only interaction dark matter is known to have is gravitational; it is under no obligation to interact with us in other ways we can measure.

But in most current models of physics, matter rarely interacts with its environment in just one way. It seems likely the dark matter mingles with its surroundings in at least one way other than gravitationally.

Conveniently, Arvanitaki says, experiments around the world are making measurements that could bear telltale signs of dark matter interactions (even if such experiments were not specifically designed for the dark matter search).

“That’s the cool thing about this,” she says. “We don’t need to prove any new technology. Most of the technologies are there already, and it’s taking advantage of the tools developed for another purpose.”

For example, the team obtained data recorded by AURIGA, a resonant bar gravitational wave detector in Italy, and looked for evidence of dark matter waves within the kilohertz range.

Though the AURIGA experiment was not designed to seek dark matter, the data it collected could, like snippets of a movie lying on the cutting-room floor, reveal a previously hidden narrative.

Perhaps, Arvanitaki and collaborators suggested, the tiny oscillations measured by the experiment can be affected by dark matter waves. In theory, the frequency of those oscillations would be amplified if they were in sync with the frequency of dark matter. Similar effects can happen at everyday scales, such as when London’s Millennium Bridge opened in June 2000. It began to sway from side to side “as many pedestrians fell spontaneously into step with the bridge’s vibrations, inadvertently amplifying them,” according to a paper in Nature.

Arvanitaki and collaborators also explored whether the frequency of oscillations in atomic clocks – the world’s most precise timekeepers – could similarly be used to detect gravitational waves. In this scenario, the oscillation of the dark matter wave would cause a measurable oscillation in the energy levels in the atomic clock.

In their initial investigations, the team saw no evidence in the data. They have only scratched the surface, however, in using these tools to search for dark matter. Experimentalists are currently looking at the AURIGA data for telltale patterns, and atomic clocks can be tuned to cover wider swaths of the parameter space where dark matter may reside (into the 1 Hz range and below).

So while dark matter remains, for now at least, both invisible and silent, Arvanitaki says this new method of hunting for it has just begun. The research so far has made an important step in the process of elimination – another suspect removed from the lineup of dark matter candidates – with more investigation to be done.

The likelihood of finding evidence of dark matter in a very narrow kilohertz range was low – like trying to catch one specific fish in an ocean teeming with life. The big catch is still out there, though, with a vast sea of wave frequencies yet to explore.

“This is the story of experiment,” says Arvanitaki. “You just have to look. Even if you don’t find anything, that doesn’t mean you stop. If you don’t look, you don’t know.”

Perimeter takes a look back at an illuminating year of science.