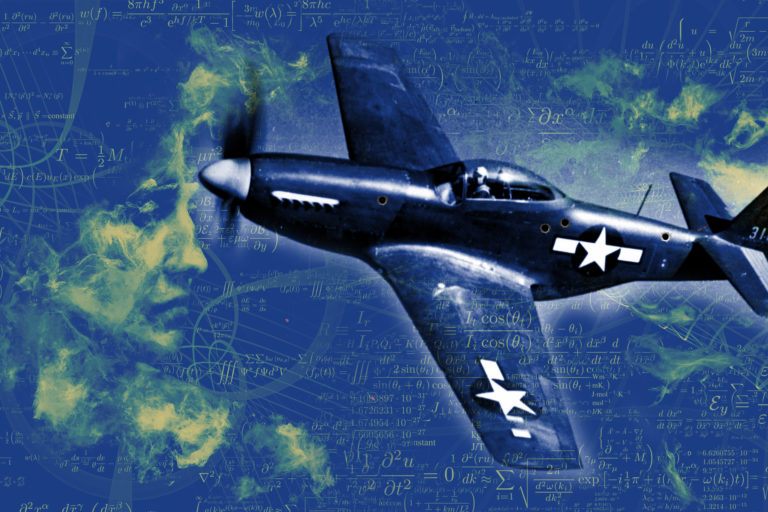 Agarwala, a staff scientist at the Applied Physics Lab at Johns Hopkins University, was speaking at a Perimeter-hosted conference, “Women at the Intersection of Mathematics and Theoretical Physics.” The three-day online event brought together women mathematicians and physicists, including several Simons Emmy Noether Fellows, working at the nexus of pure mathematics, quantum field theory, and string theory. The interdisciplinary meeting encouraged interaction between senior and junior participants and included a mentoring component.

In her keynote talk, Agarwala, who is a recent co-recipient of a Johns Hopkins Discovery Award for her work on the project Geometry and Generalization: Detecting Unconscious Bias Training in Artificial Intelligence, used applied mathematics to reframe the conversation about why women leave physics careers and to provide new ideas on how to address those losses for the field.

Combat planes are an iconic example of a statistical phenomenon known as survivorship bias. During World War II, a Columbia University statistician named Abraham Wald analyzed planes returning from battle. He studied where bullets hit each aircraft to determine their vulnerabilities and resilience.

The army commanders he worked with instinctively wanted to increase armor where bullet holes appeared most frequently. But Wald saw things differently. He recognized that the most pertinent information about fatal impacts could only come from a source they couldn’t access: the holes in the planes that never made it back.

“If we only look at the people who survive the screening process, what information are we missing?”

“They had no idea where bullets had to hit to make an airplane fall,” Agarwala said. Analogously, stories about women excelling in physics are valuable, but they are incomplete without anecdotes and data about women who chose other career paths rather than continuing to contend with a barrage of systemic biases.

“If we only look at the people who survive the screening process, what information are we missing?” she asked. “How likely are the survivors of ‘the leaky pipeline’ to be able to explain the lived experience of people who have dropped out?”

“If I draw someone from the survivor population at random, they are likely to say, ‘Oh, if you want to succeed, you need to publish more,’” Agarwala said. “That could be absolutely true, but that doesn’t address the barriers to publication for those who have dropped out.”

Often the factors that deter women – and members of other commonly discriminated-against groups – from advancing in physics aren’t as cut and dried as a bullet severing a fuel line and can be better understood through statistics than through individual case studies. Systemic discrimination, Agarwala says, is a “stochastic process,” meaning it diminishes the odds of survival. She likens it to driving in icy conditions: the increased risk doesn’t guarantee any one driver will crash but increases the overall number and severity of accidents.

In academia, not every woman who faces microaggressions – being overlooked for conference speaking engagements or awards, longer wait times between paper submission and publication, or other systemic issues – will quit. But such factors increase the overall leakiness of the pipeline.

“If we look at individual women and ask why they left, we are in danger of overfitting our data, and thus missing the actual problem,” she says. Stories of women who persevered in physics and of those who moved on to other things are important parts of the picture, but so too are the multitude of factors that affect overall rates of survival.

While Agarwala appreciates how rigorous mathematical analysis can help explain the effects of systemic discrimination, she also recognizes the outrageous appropriateness of comparing women’s careers to planes being shot out of the sky.

“It is beyond a crying shame not only that people leave academia because they feel it is abusive or discriminatory, but also that those who remain to defend the system – and even call those who leave ‘dropouts’ or ‘failures’ – look nothing, demographically, like the people who leave,” she says.

For mentors, understanding the lessons of survivorship bias and recognizing the stochastic nature of discrimination can lead not only to more people beating the odds but also to those odds becoming more favourable. It helps lead the conversation toward challenges and solutions specific to the protegé, rather than merely what worked for the mentor. And for the protegé, just having their individual situation seen can help them feel more supported.

“The thing to take away is that our experiences are truly varied,” Agarwala said. “When a woman or other student at risk of leaving comes to us for help, consider whether our own experience is the most relevant.”